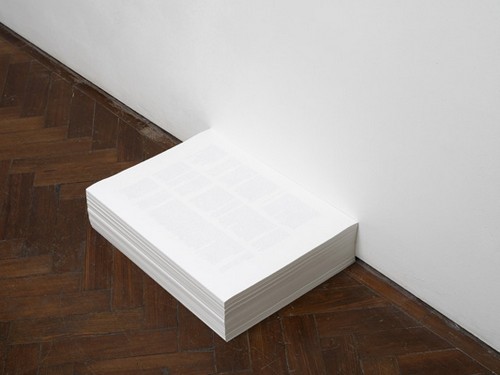 (0:00) I wonder if pairing our work addresses our blindsides. That in witnessing your work I get as close as I can to witnessing my own work as though someone else had made it. At a distance and yet implicated in its creation, existence or object-hood...

For Becky Beasley and Michael Dean the two-person exhibition has the potential to be an intimate conversation between two artists and their work. For Our Blindsides at Laura Bartlett Gallery, both artists have produced new works as a direct result of a series of long conversations they conducted during the months preceding the exhibition. These new works reveal the presence of the other, as if each could somehow only have made this work in the invisible presence of the other, the subtle new elements perhaps even producing new directions for each of them in the future.

Beasley’s work, Literary Green, formed the physical starting point for a conversation about representation and sculpture, in particular concerning questions of the back and the front of the image. In Literary Green, Beasley cut a paper template from the section of the photograph which represented the imaginary space behind the screen object. This template became the blueprint for the pale green acrylic surface of a table-like object. This is installed as a kind of obstruction to the image, but through which one can nevertheless clearly see the image. Dean responded by designing a typeface which would in some way correspond to the shape of this object. Dean centered this typeface design and, by casting for the first time from both the back and front of this typographical object, he created the indexically linked pair of standing sculptures, ahtk (Working Title) and ktha (Working Title). The titles are made from the acronym of A Hand To Know, an extract from ‘The machine of the machine of our hands’ (M. Dean 2009).

Questions of language are deeply embedded into the practices of both artists. One way to approach their work would be to think of it as an embedded language at once somehow clear, generous and open, but also silent and hermetic, that is, the deeply coded space of private language and understanding.

Beasley’s new works, You’re, are in some ways a reprise on the ‘Curtains’ works from her last solo exhibition at the gallery. These new works are made from the narrow off-cuts, or remnants, of the earlier curtain works. For the first time seamed together discordantly, the collaged fragments produce internal relationships: behind, to the side, in front. Visually very close in some ways to Michael Dean’s new standing sculptures, the works are intended to communicate unapologetically, even romantically.

Beasley and Dean also collected audio recordings of some parts of a two-day conversation that took place in Antwerp. They have produced a text work out of their transcriptions and re-workings of this fragmented material. Their distinct voices become subdued, making it at times more or less clear who is speaking. They talk of scale and unmediated experience; fascination; inspiration; and the impossibility of experiencing ones own work as one does that of another. The text reveals the artists’ broken attempts to re-engage the sensitive and intimate core of these essentially Romantic subjects for the present.