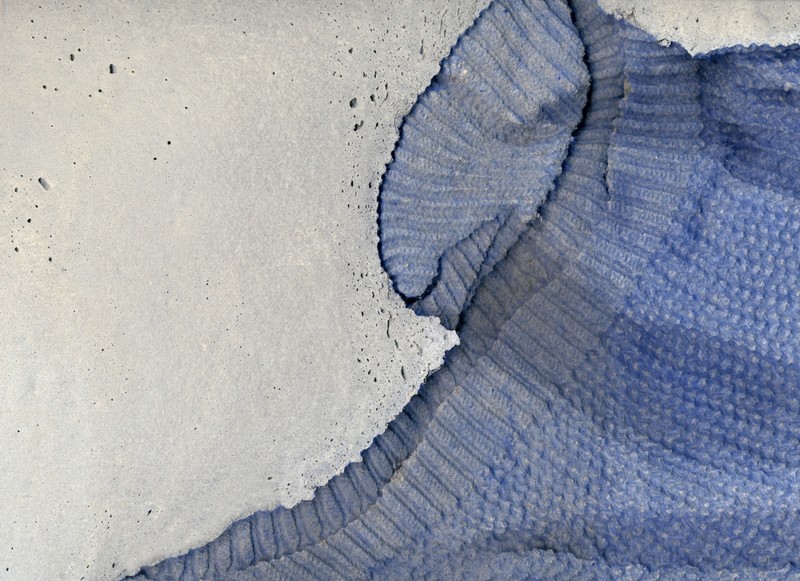 The daily ritual of pulling the curtains back and forth, of light shining onto the folds of the fabric, marks the passage of time from days into years into decades. The canvases of Stills were once curtains and used to cover the windows of a Milwaukee home. With their photographic stratifications, they are now presented as an image of their life as functional objects

As she has been doing in a number of materials and via a range of processes, Lund was looking for the imprint, the record of exposure, left inscribed on an object by a previous life and function. This attention to the skin of an object, its vulnerable surface, places Lund’s practice on the precipice of the object – at its fragile outer limits. This is border territory where one object is constantly defined by its dyadic relation to another. The interaction of two objects is mediated by an interstitial agent operating at the membrane between entities through which knowledge, pleasure and purpose are exchanged.

In Torso and Hand Full, that liminal agency remains visible only in the traces it leaves behind and has a corporeal character. In the same way materials render themselves on skin after hours of enclosure, the exchange is reciprocally remembered by the folds, the creases or the distension on the shape of the garment. The hand will fit inside the pocket and the pocket will fit inside the hand but they will only ever know each other from their outsides, each will enclose each rather than penetrate. There is a longing in these works, a sense that something is not yet requited, legible in the poses struck by the jumpers falling into the floor as the liquid concrete sets.

The works are caught between past and present, between stillness and motion, disappearance and resistance. Function’s ownership of the object remains vestigial in each body of work; the curtains still wear the Milwaukee sun, the jumpers too retain the promise of embodiment despite their heavy home on the floor. There is an invitation to the visiting body, a promise made implicitly by the offering of Hand Full, to enter the liminal space between the works.

The works in Dip address core concerns in Lund’s practice, interrogating the limits of the object. They lean on the history of photographic processes and techniques, erasure and imprint, as well as sculptural processes of casting and carving, bringing into play contemporary concerns surrounding the precarity of object-hood in a dematerialised world.