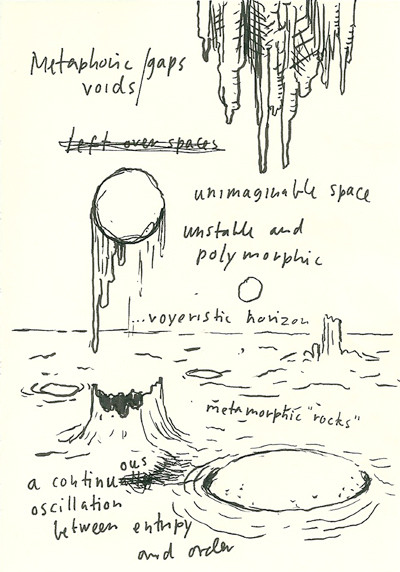 In his latest project titled Solaris, Bjørn Bjarre cares for the invisible. He takes care of the inner monologue where it is possible to carefully develop that which later can create real change. The invisible that happens through reflection and meditation can potentially lead to technological innovation or be the start of a revolution. He takes no position on this in the world of images within this exhibition, but through his fantasy images, he shows us that it is possible to think that everything we can conceive of exists. That is in fact the logical conclusion if the universe is infinite.

His starting point is specific: the 1961 book titled Solaris, written by Stanislaw Lem. It has subsequently been adapted for film several times; most famous is the Andrej Tarkovsky version from 1972. By the method he applies, and by using a book as a starting point, Bjarre mimics science: he divides the world into its smallest components, in order to understand the world better. We are thus not talking about making illustrations for a book, but rather a quasi-scientific investigation of the world through a sample, an example or an edition, if you will, where the report is presented to us in a visual format.

This report consists of four parts, where one is created on a hundred year old paper. This is at the same time the most schematic part of the report, which might tell us something about how our understanding of the world today varies from previous generations’ perception of their world. In addition to examining images and diagrams from past times, we can try to understand what has been written. Language is a filter we devote ourselves to as soon as we try to explain our own world to others. Language is, for instance used by art historians to explain art, by geographers to explain what is related to landscape and by fellow humans to explain something about their experiences, but now and then we can sense that language is insufficient. Especially in the face of the unknown – like in the book of Stanislaw Lem – art, language and science can fall short.

The planetary body referred to on the pages of the book is covered by an ocean that creates balance in the micro universe which is Solaris. The ocean has not been given a scientific name, but it clearly controls and stabilizes the orbit of the planet in relation to its two suns. This yet unnamed is a large part of the visual universe in the exhibition, and the works that the most clearly connotes this are made with pastels on paper. Pastels do not dry on paper, but is fleeting as dust. One can also claim that language, as a filter, is fleeting. Still it can be presented to us. In the work Alphabet Variations, Bjarre directs our gaze over the 26 pages of the English version of the book by using a systematic method based on the alphabet.

Those familiar with the book or the films will maybe wonder why some of the most detailed parts of the report cannot be recognized. This is a result of Bjarre’s reluctance for direct translation or copying. In several of the works in the exhibition there are bodies and structures which are not referred to in the book, but which arise out of Bjarre’s imagination. The result is a series of pastel drawings on paper that say more than a thousand words. Bjarre thus points out the paradox that an image does not say the same one thousand words to us all, and at the same time claims that a single word can create a thousand images.

Bjørn Bjarre (1966, NO) lives and works in Oslo. His latest solo show was New sculpture (hmm... let ́s see) in January of 2008 at Kunstnerforbundet in Oslo. After graduating from the Art Academy in Oslo in 1994, Bjarre made a name for himself on the Norwegian art scene in the late 90s and early 2000s. He is first and foremost known for his extensive project Abstract Feeling, consisting of plastelina sculptures and drawings with references to popular culture and surrealism.

Bjarre's works have since been shown in many group exhibitions; amongst them Norsk skulpturbiennale 2008 at Vigelandsmuseet in Oslo, God natt da du... Surrealisme i norsk kunst 1930-2010 at Stenersenmuseet in Oslo and Clusters, Contemporary art from Nordeas Art Collection (2007) and Norsk Hydros Art Collection (2008) at Henie Onstad Kunstsenter at Høvikodden outside of Oslo. He has created several works for public spaces, and his works are in the collections of, amongst others, The Norwegian National Museum of Art, Architecture and Design, Bergen Art Museum, Arts Council Norway

Since 2004 he has collaborated with Terje Nicolaisen, Ulf Carlsson, Paul Dring and Martin Skauen in Tegneklubben, last seen for instance in the TV programme Nasjonalgalleriet at NRK1 (Norwegian National Broadcasting Corporation, Channel 1) and in different exhibitions, such as at Grim Museum in Berlin in 2010 and Tegnebiennalen 2010 in Momentum/Punkt Ø in Moss.

Anne Szefer Karlsen (1976, NO): curator, editor and writer based in Bergen, Norway. Since 2008 she has been the director of Hordaland Art Centre. In 2006 she co-founded the project based Ctrl+Z Publishing, where she still is an editor.
www.lautom.no