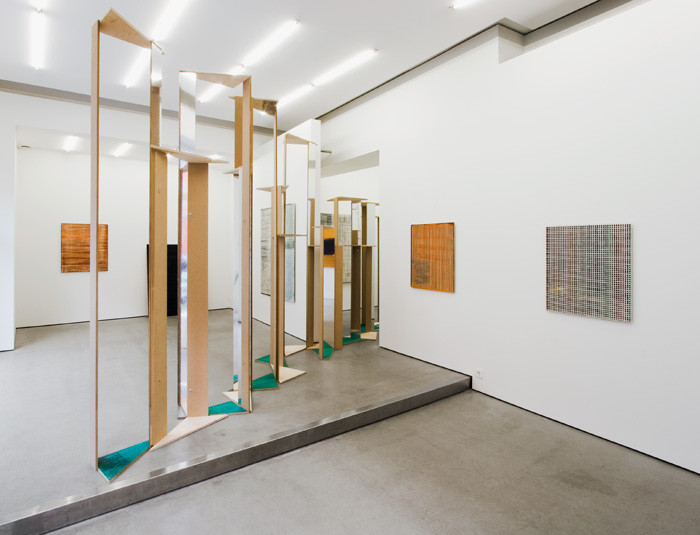 For Øystein Aasan’s third solo exhibition at Lautom he continues to work with gridded constructions and an emphasis on the viewers role in relation to the works on display. Aasan has, over the last few years, made a series of works that all use the grid as a starting point. After “misreading Rosalind Krauss on purpose” he explored the possibility of using the grid as an equalizer, either filled with text or collages. In relation to images the grid has both a specific history and meaning. Often thought of as a “purely cultural phenomenon”, the grid does not appear in nature and is therefore “manmade”.

For the exhibition LORD MEMORY, Aasan continues to work with the grid, without filling it with additional content and lets it rest on itself. The result is visually compelling paintings made with oil on veneer, using methodology and principles relating to construction and carpentry as much as to painting. Aasan uses the tools he usually needs to make wooden sculptures and furniture in his workshop, but the result is intricately relating to image making, and relies on both spatial and retinal experiences.

Recently Aasan has made one handmade artist-book for exhibition containing all the ideas and relevant information for the show. In this case the book is also titled LORD MEMORY, and continues two impulses Aasan has been concerned with for a while, namely “memory/memo-techniques and the idea of the archive”, both originating from the work Never Ending Memory, which is both a sculpture and an archive over all of Aasan’s works and ideas. This piece forms the base for all other works in his production.

Another important element in Aasan’s production is architecture and for this exhibition he shows the sculpture HONKY TONK, which with its modular construction forces the viewer to re-relate to the space, and the works on display. For the Momentum Biennale 2011, Aasan conceived, together with Marianne Zamecznik, a specific architecture where the viewer could only see and relate to one work at the time. The principle behind HONKY TONK is the exact opposite. By way of placement and construction, and as the viewer moves around in the space, he will see the works separately or through the sculptural structure, thereby changing the perception of the works.

In February this year Øystein Aasan (born 1977, Kristiansand) had his first solo show in a Norwegian museum, with the show SPOT-ON at Sørlandets Kunstmuseum, as well as his first institutional show in Switzerland at FORDE, Geneve and a solo show at PSM Gallery in Berlin for Gallery Weekend. Next year Aasan will have his first solo show in a German museum, at Gemälde Galerie in Berlin. In December he will present a solo show at the NADA art fair in Miami, with Lautom. Øystein Aasan is also the recipient of the ISCP grant in New York for 2011-2012 from Office of Contemporary Art (OCA). Aasan lives and works in Berlin and New York.
www.lautom.no