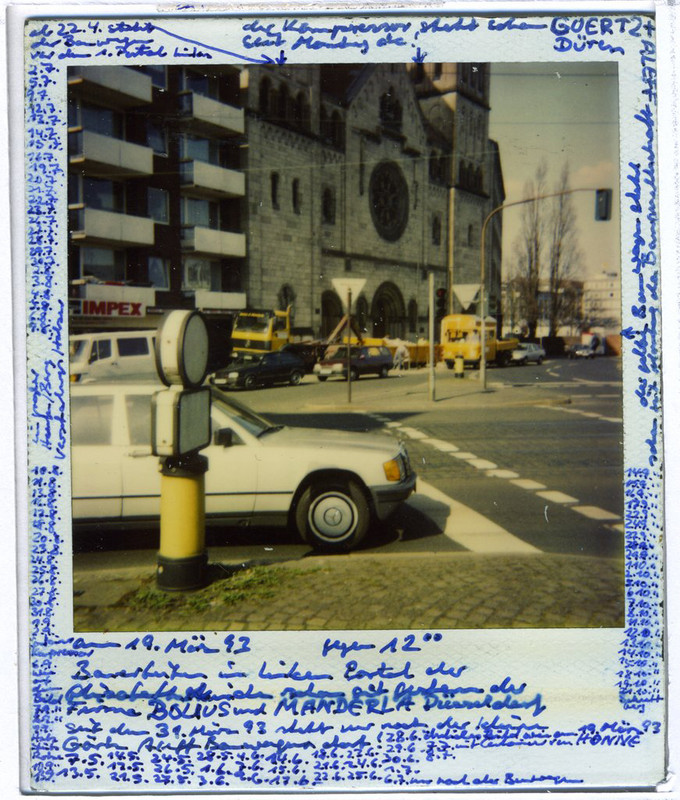 In the current exhibition “Observation“ Galerie Gebr. Lehmann is presenting Polaroids by Horst Ademeit (1937 - 2010).
For nearly 20 years (1989 - 2007) Ademeit devoted his chronological diary of observational and daily photographs to document the influence of cold rays on his living environment in Düsseldorf-Flingern. The edges of the Polaroids are furnished by microscopically small handwriting: there are remarks, observations and theories about what is depicted in those photographs and what is not. The artist placed measuring equipment such as thermometers, Geiger tubes, hygrometers and compasses as well as groceries on daily newspapers and tried to visualise the influence of the rays on himself but also on his surroundings. In this group of works of daily photographs Ademeit captures every condition visually, notes his subjective observations such as smells and noises and links them to the events of world politics he finds in daily newspapers or hears on the radio. Until his death he produces 6006 daily photos.
The second group of works, the observational photographs, show meticulous observations of the artists’ surroundings. On his photographs he notes the locations of cars and the duration of parking, abandoned bicycles or building sites show the influence of rays as well as the behaviour of spiders in his apartment or his neighbour’s turtles in the backyard. The animals’ behaviours are being observed and evaluated. Also his own body serves him as a visualisation of the harmful outer impact. The artist himself describes his work as an original form of registration; he is taking photographs of facts in order to protect himself.[1]
The Polaroids are not serving as proof of the phenomenon of rays but simply to document the condition and the existence of the rays through a hard to manipulate authenticity of this medium.
From an art historical perspective Horst Ademeit can be related to Jean Debuffet’s interpretation of the term art brut or outsider art, since Ademeit only shortly studied with Joseph Beuys at the Düsseldorf art academy but never finished his artistic education. Ademeit saw his documentary oeuvre that was thought for private use only as a necessity in order to protect himself. Precisely his occupation with the subject, technique and form show an inner necessity and innovation that join him with representatives of “raw art“ such as Adolf Wölfli or Morton Bartlett. Thinking of artists such as Roman Opalka and On Kawara at the same time Ademeit’s approach to work depicts art historical strategies that can also be found in concept art.
Ademeit’s works were shown at Hamburger Bahnhof, Berlin in the series of exhibitions “secret universe“ in 2011, at the 30th Biennale in São Paulo in 2012 and are now presented at Galerie Gebr. Lehmann for the first time.