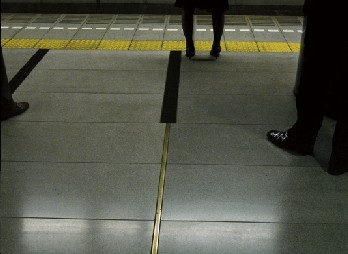 How a footpath is reminiscent of the form of Japanese gardens and Japanese script.
In the Nakano Sakaue Series, something marginal – such as tactile floor markings for the blind in the streets and subway stations of Tokyo – is handled as an object of contemplation. The markings are stacked, jagged, cut, assembled as if by random – quite obviously devoid of any concrete order. Nevertheless, they are understandable, formulated according to the situation. They are reminiscent of the ink paintings of Sumi-e. Their logic is visual. The ground underfoot describes how the people of Tokyo behave in relation to one another, how they arrange themselves. These are specific negotiations of a city engaged with itself. The markings demonstrate not only their own function, but also the position which an inner mental space takes up in relation to its periphery, the passage from the inside or personal view of the perceiving blind dwellers of the metropolis to their external world. A passage which parallels, in Tokyo, the paradigm of the Japanese garden and the interrelated islands of Japan.

Landscape and topography influence the traces in our thought. In urban spaces such as Tokyo, Buenos Aires or Istanbul, Olaf Holzapfel photographed these traces as a visual mirror of our current as well as historical actions. He follows the thesis of Gotthard Günther, which states that philosophical and real landscapes are interdependent. At the same time, he counters Günther’s1 thesis with the claim that this relation between topography and thought has found its end since Modernity and, in turn, since globalization.
It appears that the ends of thought are explicitly concealed in the everyday.
Holzapfel’s photographs observe that there is an astoundingly continual connection, even considering all the changes of cultural methods and techniques, between people and their landscape. This connection becomes visible most commonly in places which hold no prior preference in our organization and which become altered, as it were, in passing. Holzapfel is currently working on a project which deals with the landscape of the Sorbs.

1 The philosopher Gotthard Günther (1900-1984) is considered the founder of a trans-classical, multivalent logic with applications in computer theory and to problems of the technical reproducibility of functions of consciousness. His generalized theory of many values, or polycontextural logic, led to a redefining of the relationship between logic, ontology and time. Publications:
Die Amerikanische Apokalypse. München 2000.
Idea and Outline of a Non-Aristotelian Logic, 1959.
The book Olaf Holzapfel: Nakano Sakaue. Verhandelte Zeichen with a text by Andreas Spiegel was published in 2009 by Sternberg Press.

This exhibition is taking place as part of the European Month of Photography, Berlin.
www.galerie-gebr-lehmann.de