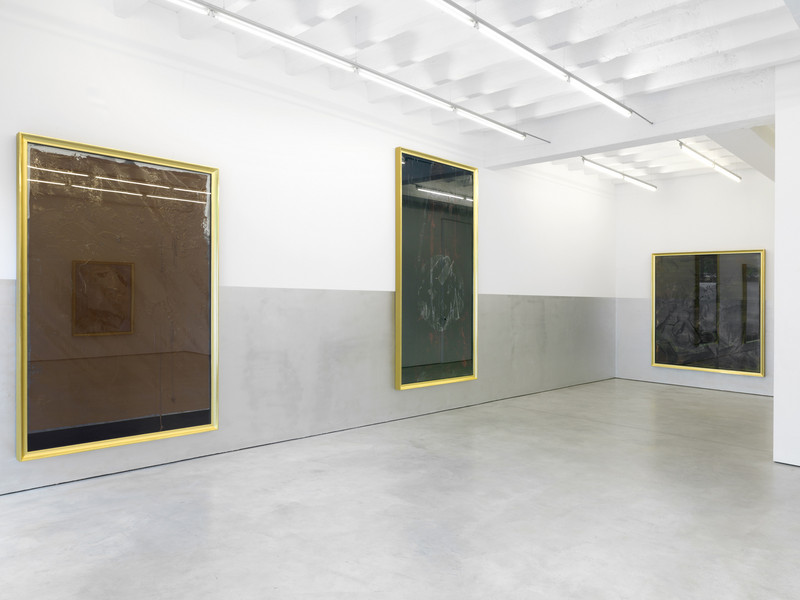 The Pharaoh Is Coming is the title of the 6th solo exhibition by Tatjana Doll in the Gallery Gebr. Lehmann. Starting from the 1st of May, Tatjana Doll is showing a selection of paintings in the Berlin gallery space that “we put the hip-hop gold bling-bling chains on”, as the artists puts it.
Dolls paintings are the antagonism between excess and simplicity. In this dualism, our reality becomes multidimensional–it consists of a different realization of forms and things, which remain unchanged in their core nature.
Doll uses the collective symbols as well as subjects from the masterpieces in her paintings, she steals them from the history in order to experience them anew. The enamel surface is constantly being interrupted by the heavy paint flowing down, so that the subject is left to be a mere reflection or a piece of external information. This is a new, additional dimension that collides for Doll with the Terminator, in whose I‘ll be back-concept, the process of the returning motive maintains its own counterfeit. Tatjana Doll names this the shock of the real.
It is not a coincidence that the painting ENAMEL_Glutamate is in fact a flavor enhancer. The thick, pastose brushstrokes of the enamel paint reveal its narcotic effect. The pure being-nothing-but-one-self of the painting can be observed. All we are looking at is the paint, supersaturating and evoking a visual desire for an image.
DUMMY_Borderline (Darth Vader) is a blackened painting but as if illuminated by emergency light, a dark red, black and clear bright circle become visible. Its sharp outlines mark the border where the particles move to left or right. One can recognize that the black swastika placed on top is visible due to a later restauration, faint white lines illuminate the drippings and seem to obscure the boundaries. The character of Darth Vader is used in psychology to describe the borderline syndrome–the inability of a person to find a stable position regarding self-identification and as a consequence an effect on his relationship to others.
RIP_Magnetic Pimp Force Field is based on the Pink Lady, a pastel by Willem de Kooning from 1948. Tatjana Doll adopts this figure but puts it in a different image setting. Gently, the lines are wandering in a silhouette of the picture in the darkness, and the more the gaze is fixed on one spot, the more the overview of the complete figure and situation is getting lost.
DUMMY_Akku Akku (Amalgam) addresses the dimension of power. An oversized head like thing stiffens in the amalgamated paint and rises high with its gaze down. The artist seizes the depiction of a Moai statue of Easter Island. Presumably the part of a ceremonial ground, the figures embody the unexploited, unknown. Rigid from our lack of understanding, we face these massive, thousands of years old relicts with a submissive fascination.
www.galerie-gebr-lehmann.de