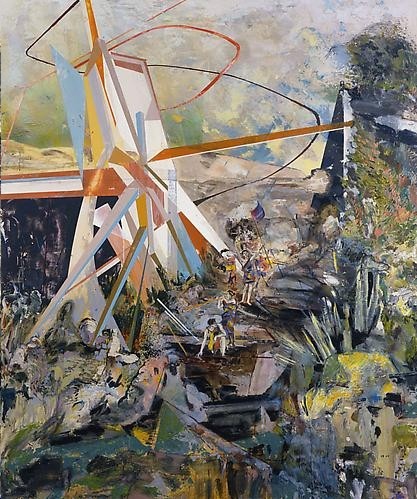 Lehmann Maupin Gallery is pleased to announce its first exhibition with Hernan Bas, The Dance of the Machine Gun & other forms of unpopular expression, opening on Thursday, 23 April at the gallery's 201 Chrystie Street location.

Bas continues to indulge his fascination with the history of painting, fantastical tales of the supernatural and Neo-Gothic romanticism to form a new series of paintings. He has moved away from the decadent dandies of earlier series towards fertile landscapes populated with exotic creatures and waifish adventurers. His dark and melancholy palettes have given way to lush vivid colors, yet continue to extol the escapist fantasies and rich narratives seen in his early career.

The show's title, "The Dance of the Machine Gun & other forms of unpopular expression" references the "Futurist Manifesto" by F.T. Marinetti the Italian poet, editor and founder of the Futurist movement. The possibility for new ideas and ways of thinking that evolve from the absurd encapsulate Bas' thinking behind the entire body of work, and he takes as his point of departure the absinthe induced writings and absurdist theatre concocted by Alfred Jarry. His paintings of immense scale conjure a complex visual dialogue referencing Dada, Futurism, Surrealism, and early Russian theater. In "Ubu Roi", Jarry's irrational main character Ubu, leads a group of dancing followers through a scene reminiscent of Russian Futurist stage design, flat cubist abstraction and the illustrated tales of Hans Christian Andersen. It is a world rich with the
history of his predecessors, yet a vision of possibilities that is inherently Bas's own.

Hernan Bas: Works from the Rubell Family Collection, curated by Mark Coetzee, is also on view at the Brooklyn Museum through 24 May 2009. In 2005, he presented Soap Operatic, a solo exhibition at The Moore Space, Miami. Other notable exhibitions include the 2004 Whitney Biennial, New York; Ideal Worlds: New Romanticism in Contemporary Art, Schirn Kunsthalle, Frankfurt; Triumph of Painting: Part Three, Saatchi Gallery, London; Like Color in Pictures, Aspen Art Museum; and Humid, The Moore Space, Miami. His work is included in the permanent collections of MoMA, New York; SF MoMA, San Francisco; MoCA, Los Angeles; the Brooklyn Museum, NY; MoCA, Miami; Hirschhorn Museum and Sculpture Garden, Washington D.C; and the Miami Art Museum. Bas lives and works in Miami, Florida and studied at the New World School of the Arts.
www.lehmannmaupin.com