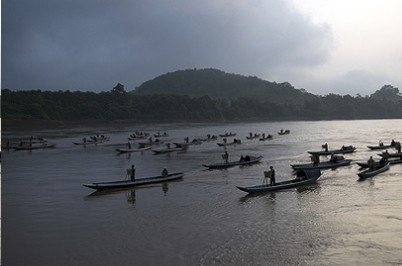 Lehmann Maupin is pleased to present an exhibition of new work by Jun Nguyen-Hatsushiba. This will be the artist’s second solo exhibition at the gallery. Best known for his films shot underwater, Nguyen-Hatsushiba examines the impact of globalization through the lens of Southeast Asia. For this exhibition, Jun Nguyen-Hatsushiba presents a new film, The Ground, the Root, and the Air: The Passing of the Bodhi Tree along with a large spatial installation titled Garden of Globes that was shown at Kunstmuseum Luzern this year.

Shot in Laos with the participation of art students from the Luang Prabang School of Fine Arts, The Ground, the Root, and the Air: The Passing of the Bodhi Tree examines the region's various youth cultures as they try to achieve contemporary definitions of success without losing the essential roots of their heritage. The new film observes ambition for individual achievement as traditional values and customs are shifting in the minds of the youth. It becomes apparent that these shifts cannot be ignored in order to become a competitive society and the film attempts to capture this turbulent evolution. The Ground depicts a group of determined joggers running on a circular track in an open-air stadium. To create a dream-like experience, the “chapters” are interspersed in no recognizable sequence. In the interlude, entitled The Root, illusory images of traditional lanterns featured during the annual Festival of Light in Luang Prabang while in the final chapter, The Air, depicts the group of students drifting down the Mekong River amid the passing landscape. The site of the Bodhi Tree, a symbol of Buddhism, causes some to abandon their boats, a gesture indicative of these cultural controversies.

Like the underwater settings of his former work, the physical restrictions imposed by the landscapes ask both the subjects in the film and the viewers to consider the endurance of culture, landscape, and artistic process.

Jun Nguyen-Hatsushiba was born in Tokyo in 1968. He earned an MFA from the Maryland Institute College of Art after receiving his BFA from the School of the Art Institute of Chicago. The Asia Society will show Memorial Project Nha Trang, Vietnam—Towards the Complex—For the Courageous, the Curious and the Cowards in Fall 2008 as part of their recent acquisitions. He was the subject of a solo exhibition at the Kunstmuseum Luzern, Switzerland, and featured in the group show Thermocline of Art: New Asian Waves at ZKM, Karlsruhe, Germany. Other selected exhibitions include Malmo Konsthall, Sweden; Memorials of Identity: New Media from the Rubell Family Collection, Miami, Florida; Collection, Collection of Centre Georges Pompidou, Paris, France; Caixa Forum, Fundacion la Caixa, Barcelona, Spain; Ecstasy, Museum of Contemporary Art, Los Angeles, California (all 2005); Mori Art Museum, Tokyo, Japan (2004); Museo d'Arte Contemporanea Rome, Italy; Kunsthalle Wien, Vienna, Austria; The New Museum of Contemporary Art, New York, New York (2003). His work has also been exhibited in numerous biennials, including the Venice Biennale (2005 and 2003) and the 8th International Istanbul Biennial (2003). Of Vietnamese and Japanese background, Nguyen-Hatsushiba currently lives in Ho Chi Minh City, Vietnam.
www.lehmannmaupin.com