Law of the Jungle 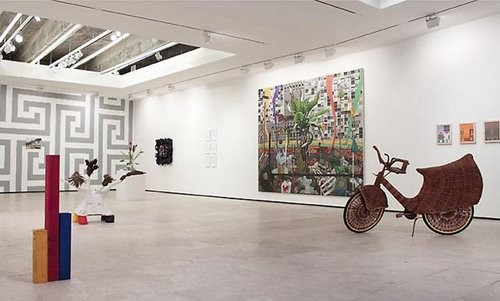 Lehmann Maupin Gallery presents Law of the Jungle, an exhibition curated by Brazilian artist, Tiago Carneiro da Cunha, on view at 540 West 26th Street, 9 December 2010 – 29 January, 2011. For Law of the Jungle, Carneiro da Cunha has selected a diverse group of artists from contemporary to outsider, both established and emerging, for a thematic exhibition based on ideas of survival: personal and collective survival, as well as the survival of the artistic practice at large. Carneiro da Cunha proposes a selection of works by artists from Brazil, Bali, the UK and beyond, in which Darwin’s theory of “survival of the fittest” and the endangered livelihood of the artistic practice itself is conveyed.
Participating artists include Efrain Almeida (Brazil), Caetano de Almeida (Brazil), Ashley Bickerton (Bali), Joshua Callaghan (US), Marcos Chaves (Brazil), Saint Clair Cemin (Brazil), Howard Dyke (UK), Os Gemeos (Brazil), Liam Gillick (UK), Christopher Knowles and Robert Wilson (US), Shay Kun (Israel), Jac Leirner (Brazil), Jarbas Lopes (Brazil), Marssares (Brazil), Paul McDevitt (UK), Malcolm Morley (UK), Raul Mourao (Brazil), Adriana Ricardo (Brazil), Marepe (Brazil), Adriana Varejao (Brazil), Erika Verzutti (Brazil), Luiz Zerbini (Brazil) and Tiago Carneiro da Cunha.
Each of the artists in the exhibition draw upon elements of art history, applying facets of inspiration and the evolution of artistic practices to create works mindful of today and the world around us. While all tie back to the central theme of survival, featured works reference a range of views and approaches. Reflections of our society’s abundance of products and wasteful attitude through the use of re-appropriated items are present in Leirner’s composition of devalued Brazilian currency, Bickerton’s use of flotsam, or Caetano de Almeida’s geometric paintings composed by polluted Sao Paulo air. The blurring of boundaries between the natural and the man-made can be found in Verzutti’s compositions using cast tropical fruits, or Lopes’ wicker-covered bicycle, while a more classical approach is used in Almeida’s wooden sculptures, Marepe and Mourao’s works on paper, Cemin’s cast bronze, and traditional painting by Morley, Zerbini, McDevitt, Ricardo and Varejao. Whatever the chosen medium, each artist presents a visionary take on both their craft and the world around them. It is a landscape constructed as much by the remains of the ordered, modernist worldview – as seen in the works of Gillick, Callaghan, Leirner, Cemin, Zerbini - as well as by the chaotic, trans-historical and violent mud that surrounds us– seen in the works of McDevitt, Carneiro and Morley - in many cases uniting both into elaborate, hallucinogenic compositions, like those of Kun, Varejao, Bickerton, Caetano, and Gemeos. Although these are often dramatic views of a maddening world, the unifying theme is not somber but is instead humorous and optimistic.
Tiago Carneiro da Cunha was born in São Paulo in 1973, where - as a young man - he worked as a comic book artist and illustrator. Awarded the 1998 Apartes/Capes scholarship for postgraduate studies in Visual Arts at Goldsmiths College, London, Carneiro da Cunha studied under and was influenced by named artists including the Chapman Brothers, Pierre Bismuth and Liam Gillick, among others. Since then he has had solo exhibitions at Galeria Fortes Vilaça (São Paulo), Kate Macgarry Gallery (London), and Misako & Rosen Gallery (Tokyo - with Erika Verzutti) and has taken part in exhibitions in museums and galleries world-wide. His work is featured in many public and private collections across the globe including the Coleção Gilberto Chateaubriand (Museu de Arte Moderna, Rio de Janeiro), Saatchi Collection (UK), and Thyssen-Bornemissa TB21 (Austria). Guest lecturer at the Capacete/2010 São Paulo Bienal Talks.
For further information, please contact Bethanie Brady at 212 255 2923, Bethanie@LehmannMaupin.com, or visit our website www.lehmannmaupin.com. For gallery news and exclusive artist updates become a Facebook Fan of Lehmann Maupin.