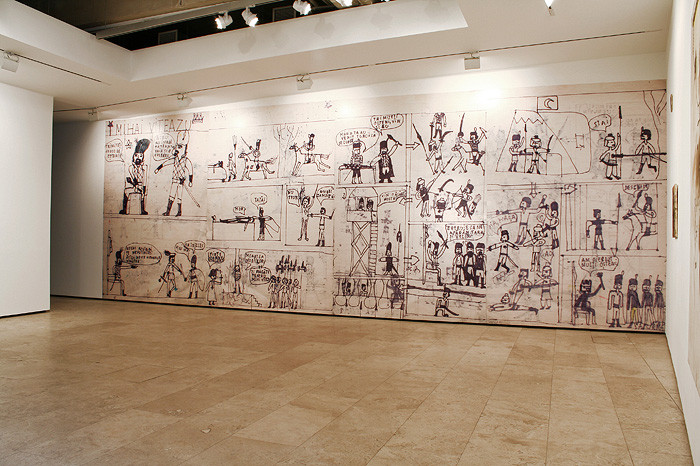 Lehmann Maupin Gallery is pleased to present Duet, a group exhibition curated by Sylvia Chivaratanond. Duet, featuring Michael Bauer, David Noonan and Victor Man, brings together a group of artists whose art practice is at once disparate and analogous to the current milieu of contemporary art.

The work in the exhibition deviates from typical representational portraiture, thus creating an uneasy relationship between painting, sculpture and film. Each artist's practice is varied as they set up their own dichotomies as in Michael Bauer's paintings and drawings. Bauer's (b. 1973) work appears at once to be haphazard abstract forms and mapped figurations. The paintings and drawings, although playfully sophisticated, resonate a discomfort as monstrous forms emerge from a seemingly poetic zone. Anthropormorphic figures gel with refined geometric shapes that call to mind the work by Futurists artists such as Giacomo Balla and F.T. Marinetti.

David Noonan's (b. 1969) 8 mm films and photomontages expand upon Western and Eastern folkloric mythologies as well as the often dark and somber side of humanity. Though influenced by 1970s sci-fi and horror films, Noonan's immediate sources are anonymous. However, many of the scenes in his films and photomontages include ritualistic gatherings, theatrical role-playing, or masked figures. The images, many in black-and-white, remain out of focus and difficult to translate, choosing a visual language that confuses narrative with abstraction.

Victor Man's (b. 1974) wall drawings and paintings/sculptural assemblages are tempered by traces of memory and fragmentation, both geographical and ideological. His work allows for an open interpretation as well as a very distinct identity borne out of the region he comes from.

Each artist draws from distinct personal and collective experiences as in the physical and mental isolation that implies living and growing up in Northern Germany, Ballarat, Australia and Transylvania, a province of Romania.

David Noonan was born in Ballarat, Australia and currently lives and works in London. His work has been shown in numerous exhibitions worldwide most recently a solo exhibition at the Palais de Tokyo in Paris and the Tate Modern in London. Born in Erkelenz, Germany, Michael Bauer lives and works in Cologne. Helena Kontova and Giancarlo Politi included Bauer in the recent Prague Biennale 3 and his work was also on view at the Germania exhibition at the Saatchi Gallery in London. Michael Bauer is also the founder of Brotherslasher Cologne with Tim Berresheim. Victor Man born in Transylvania, Romania and lives and works in Cluj and was also included in the Prague Biennale 3. He will represent Romania at the upcoming Venice Biennale.
www.lehmannmaupin.com