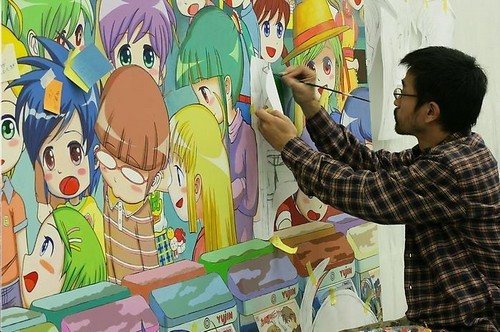 The Japanese artist Mr. will have his second exhibition with Lehmann Maupin and his first at the 201 Chrystie Street gallery. Premiering at Geisai #11 in Tokyo, here he will have the U.S. debut of his film, Nobody Dies, along with a new large-scale painting, works on paper and his first foray into photography.
Expanding upon his examination of the Otaku subculture in Japan, which emerged in the 1970s and mainly consists of obsessive males whose fetishes include cuteness or kawaii, Mr. uses adolescent Japanese girls he discovered on the streets of Tokyo as the subjects for his film. Inspired by the painting It hurts when it hits bare skin, the film follows these fictional characters, who are obsessed with a war-like survival game, as they transform from their peaceful everyday lives into Technicolor warriors outfitted in pink, yellow and green camouflage with matching guns.
"As I close my eyes, I see the distant Arakawa River, the faraway sky," a monumental painting also on view, reflects a pastime of Japanese misfits. Crowds gather in the Akihabara (Akiba) neighborhood around toy dispensers similar to those found in American supermarkets in hopes of winning coveted prizes. Never knowing exactly what item will emerge, they cheer "gotcha-gotcha", the sound that the machine makes as it is dispensing the toy. This neighborhood is the epicenter of Otaku devotees and Mr. continues to explore this subculture that is obsessed with technology, manga, sci-fi literature, anime and video games.
Mr. lives and works in Saitama, just outside of Tokyo. He graduated from the Department of Fine Arts, Sokei Art School in Tokyo in 1996. Mr. was discovered by Takashi Murakami in 1995 and since then has been involved with Murakami's art studio and enterprise Kaikai Kiki. Recently, Mr.'s work was included in the acclaimed Krazy: the Delirious World of Anime + Comics + Video Games + Art at the Vancouver Art Gallery as well as the Musée d'Art Contemporain de Lyon with fellow Kaikai Kiki artists Chiho Aoshima and Aya Takano. In 2005, he was included in the exhibition Little Boy: The Arts of Japan's Exploding Subculture at Japan Society in New York. Mr.'s work is represented in numerous public and private collections worldwide. A concurrent exhibition will also be on view at Galerie Emmanuel Perrotin, Paris 21 October 2008 through 10 January 2009.
The exhibition will be on view from 6 November 2008 through 21 February 2009.
www.lehmannmaupin.com