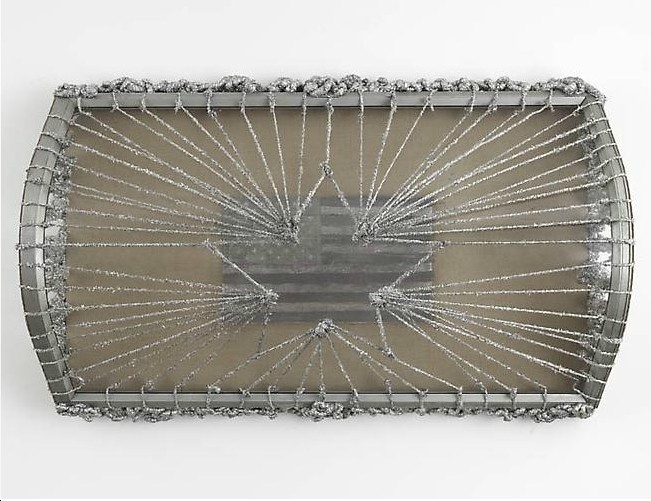 Liberty and Orders picks up where we left off with Nari Ward’s 2010 exhibition LIVESupport. In 2010, Ward exhibited “Father and Sons,” a video work depicting two sons and their police officer father. The father stands as a symbol of the safeguards we have in place, but as we are aware, oftentimes these safeguards do no operate as intended. In the past year, Nari Ward went through the process of naturalization. One of the reasons being that it offered him protection. Wishing to “cover” himself, Ward became a U.S. citizen and in the process faced various questions and subjects concerning law and authority. These experiences became key influences for the works in this exhibition. Becoming a citizen for many is an emotional experience, one that is celebrated with tears of joy. For Ward, the act of making these works was cathartic in the same way tears of joy are. The exhibition explores a range of themes dealing with anxiety – such as the anxiety of being stopped by police – our relationship to the systems of authority set in place, and art with a moral key. As a whole, the exhibition explores the balance of control and freedom.

In “Casings” Ward takes the New York City Police Department stop-and-frisk report, which talks about the body in strange language, and transforms it by relating it to the body in a more direct way. In doing so, he seeks to give this legal document empathetic resonance and presents it as something more than merely lines and questions. The central piece of Ward’s show is an installation of a tactical platform police tower, titled, “T.P. Reign Bow.” Wrapped in blue tarp with brass grommets, the tower emits red surveillance lasers. Used-pant zippers attached together and pinched hair, a reference to Rapunzel, hang from the tower. At the base, a sly fox with an afro-tail stands alert as witness. For Ward, this work stands in as a symbol of control. The overpowering height of the work communicates the notion that the higher you are, the more you maintain a sense of control. In “Homeland Sweet Homeland” Ward incorporates the Miranda Rights from the point of view of a civilian who provides a “Notice to Police Officers and Prosecutors.” Sewn in fabric with megaphones, eagle feathers, razor wire, spoons, and chains, the altered rights become a celebratory and righteous anthem. This work was produced in collaboration with The Fabric Workshop and Museum, Philadelphia, PA.

Ward has received commissions from the United Nations and the World Health Organization, and awards from the American Academy of Arts and Letters, the National Endowment for the Arts, New York Foundation for the Arts, John Simon Guggenheim Foundation, and the Pollock Krasner Foundation. Nari Ward is a Professor of Art at CUNY Hunter College and currently lives and works in New York.
www.lehmannmaupin.com