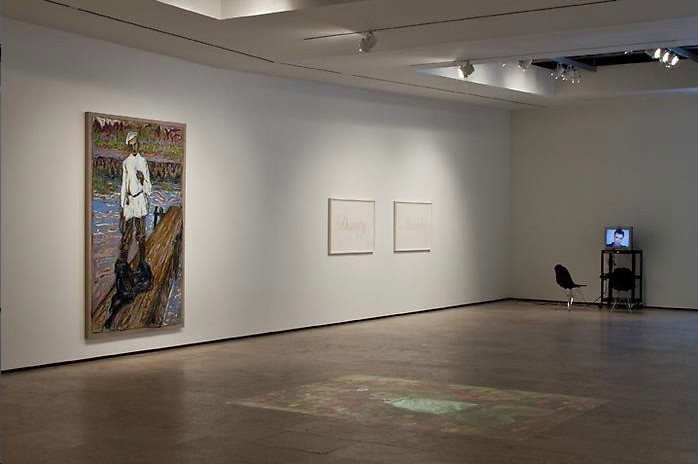 Billy Childish’s portraits of composers Sergei Vasilievich Rachmaninov and Jean Sibelius reflect the crossover between art and music in Childish’s work. In addition to the creation of over 2000 paintings, Childish has a prolific output of music and poetry, with over 40 collections of poetry and 100 full-length LP’s. Childish will present his first solo exhibition at Lehmann Maupin Gallery in November 2011.

Video and performance artist Kalup Linzy is best known for his series of video art pieces satirizing the tone and narrative approach of television soap opera. In addition to serving as writer, director, and editor, Linzy performs many of the characters himself, oftentimes donning drag. In “Conversations wit de Churen VII: L’ll Myron’s Trade,” we follow Katonya and others through a dramatic soap opera narrative.

Tony Oursler, known for his innovative combination of video, sculpture, and performance, explores the relationship between the individual and mass media systems with humor, irony, and imagination. Among the artists Oursler has collaborated with is Sonic Youth member, Kim Gordon. In this exhibition, Gordon's "Sickness" and "Hair Police" from the series titled "The Noise Paintings," take their names from the subculture of noise bands, treating the blank canvas like a t-shirt.

Ryan McNamara mines pop music history to locate soundtracks for his investigations into the peculiarities of bodily and social experience. “Trains, Boats and Planes,” projected on the floor, shows the artist lying amid a field of dime-store leaves as the Burt Bacharach song of the same title plays. The artist has said that this work is the realization of an image that popped into his head every time he heard these no-win, futile lyrics.

Artist, musician and DJ Dave Muller creates experimental works, reinterpreting objects that mingle personal and musical. “Muller Family Car Listening Stack (From Frances Down to Dave)” reflects the artist’s attempt to transform the ephemeral into the concrete. The work captures the moment in which this stack of CDs, representing the family’s listening spectrum, were all together in the Muller Family Car.

Dario Robleto often uses records, tapes, and recordings as his medium to address themes of popular music and culture, science and humanity. Robleto’s “I Wish The Ocean Sounded More Like Dusty Springfield” and “I Wish The Ocean Sounded More Like Muddy Waters,” are composed of apple blossom seashells collected by the artist. Robleto created pairs of seashells and serenaded them with songs by Dusty Springfield or Muddy Waters and then returned each seashell’s partner to the shore in hopes of altering the sound of the ocean. Robleto then used the remaining seashells to spell out the words “Dusty” and “Muddy.”

Former Punk Guitarist and sound artist, Stephen Vitiello, who has also collaborated with Oursler, manipulates and transforms everyday atmospheric sounds in his creation of sound installations. Vitiello’s “Light Readings” is an audio-video work in which the artist used a “photocell” device that translates light frequencies into sound through a video synthesizer.
www.lehmannmaupin.com