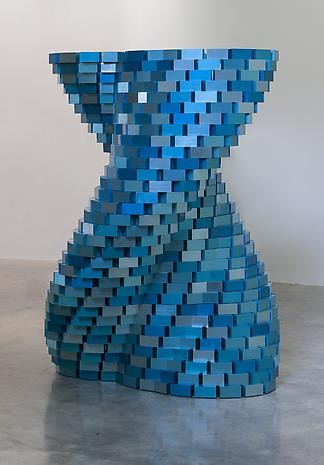 Lehmann Maupin is pleased to announce an exhibition of new work by Shirazeh Houshiary on view at 201 Chrystie Street from 30 October – 28 December 2013.

Shirazeh Houshiary’s sixth solo show with Lehmann Maupin features a selection of new paintings that continue to demonstrate the artist’s scale of effort and process which unites line, color, and light to shape a meditative visual experience. The eye fell in love with the ear will also include Houshiary’s new animation Dust in addition to a series of anodized aluminum twisting helical sculptures. The artist will be present for an opening reception on Wednesday, 30 October from 6 to 8 PM.

Houshiary’s work explores the very nature of existence. Through her chosen media of painting, sculpture and video, the artist exposes the nature of human experience to time and space, marked by a multitude of binary ideas which include transparency and opacity, presence and absence, and light and shadow. By exploring these polarities, Houshiary illuminates unique moments suspended in time that reveal and ignite qualities that are often unseen. In creating her works the artist draws inspiration from both established formal principles of Western painting and the rich traditions of Islamic art, however the aesthetic outcome is a new order that is foreign to both. Houshiary’s paintings, which she describes as “a thin skin,” unravel concepts such as perception and cognition to suggest multiple visual planes that appear to pulse and undulate. Intricate markings resembling script are repeated and overlapped across each canvas to create luminous patterns that seem to morph into vapor. The depicted gashes and hazy abstract imagery of each work hint of an infinite dimension and create a space for both imagination and contemplation. Subsequently, the artist’s intense concentration and process in realizing these works is then echoed in the contemplative gaze of the viewer.

Houshiary’s current body of work ambitiously expands her concepts in both scope and scale. Echo, the second diptych painting ever produced by the artist, offers an immersive experience to the viewer that evolves and is altered by their physical relationship to the painting.

Her newly produced animated film entitled Dust further captures the unseen through a combination of moving images of a single candle burning. As soot from the flame accumulates and dissipates at varied time intervals, these visual transformations paired with a chant, moving as a wave from low to high and back to low, by soprano Olivia Salvadori convey the past, present and future simultaneously.

Finally, a new trio of sculptures further explore the dichotomy and tension found in Houshiary’s paintings and illustrates the visual vibration of her two-dimensional works in full form.

Shirazeh Houshiary (b. 1955; Shiraz, Iran) moved to London in the mid 1970s, where she studied at the Chelsea School of Art, London and later at Cardiff College of Art. Houshiary quickly became established alongside a generation of sculptors working in Britain in the 1980s, including Anish Kapoor and Richard Deacon. A Turner Prize nominee in 1994, Houshiary has been included in solo and group exhibitions at the Broad Art Museum, Michigan (2013); Royal Academy of Arts, London (2012); The Dayton Art Institute, Ohio (2011); Museum of Modern Art, New York (2007); Tate Liverpool (2003); and Camden Arts Centre, London (1993), among others. In 2013, Houshiary’s work was included in two collateral exhibitions at the 55th Venice Biennale, including a site-specific installation at La Torre di Porta Nuova, Arsenale Nord and Glasstress 2013. The artist’s work was also recently featured in the Kiev Biennale (2012) and the 17th Biennale of Sydney (2010).