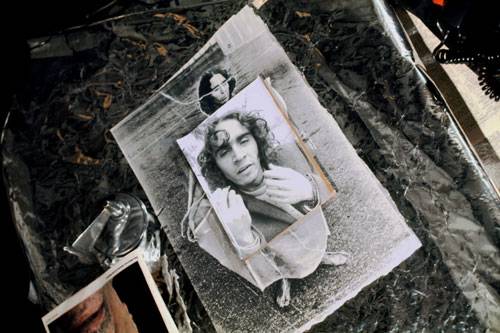 Cosmococa Programa in Progress - Quasi-Cinema CC1 Trashiscapes, a participatory installation of slides, sound, and objects by the key Brazilian artist Helio Oiticica (1937–1980), will be presented at Galerie Lelong. For the first time in New York, the complete series of 32 photographs relating to the slides in CC1 Trashiscapes will also be on view. The exhibition opens on Friday, May 5, from 6 to 8 pm. The artist’s brothers and the filmmaker Neville D’Almeida, Oiticica’s collaborator in CC1 Trashiscapes, will be present.

Born in Rio de Janeiro in 1937, Helio Oiticica is better known for his color and spatial works of the late-1950s and ‘60s than for his installations. Often inviting the physical engagement of the viewer, important works from this period include suspended, monochromatic sculptures or “spatial reliefs,” and the parangoles, richly-colored capes and banners intended to be worn and inhabited. After moving to New York in 1971, he began incorporating elements from film and theater to create interactive environments, which he dubbed “quasi-cinemas.” The Cosmococa series integrate props, pop music, and counterculture iconography and have only recently been recognized as seminal works in installation art and film.

CC1 Trashiscapes dates from 1973 and was first exhibited at Babylonests, the East Village apartment and studio where Oiticica resided until his death in 1980. Slides were projected onto the walls against a soundtrack of street sounds, music from the northeast region of Brazil, and Jimi Hendrix. Mattresses and pillows invited the spectator to leisurely recline while surrounded by potent imagery incorporating Luis Bunuel, Frank Zappa, cocaine, and the parangoles.

Many contemporary practices that are now widespread—video, mixed media, collaborations between different types of cultural producers—have their seeds in raw installations of the ‘70s. Oiticica’s influence as a progenitor of these practices is now being more fully acknowledged, with the Cosmococa collaboration with Neville D’Almeida as one of the clearest examples of these prescient movements. The quasi-cinemas demonstrate Oiticica’s central belief in the reversal of the roles of spectator and art. Rather than be asked to passively observe the images, the viewer is invited to enter and participate in a multi-sensory experience, subverting the separation between art and life.

Hélio Oiticica: Quasi-Cinemas was presented in New York at the New Museum of Contemporary Art in 2002, after having traveled in the U.S. and abroad. Since then, Oiticica has been a central figure in several major exhibitions examining key movements in art and culture, including Open Systems at the Tate Modern, London (2005), Tropicalia at the Museum of Contemporary Art, Chicago (2005), and Beyond Geometry at the Los Angeles County Museum of Art (2004). In 2005, The Cosmococa series was presented in its entirety at the Centro de Arte Hélio Oiticica, Rio de Janeiro, and at the MALBA in Buenos Aires, Argentina. In December, the Museum of Fine Arts Houston will present the first of a two-part solo exhibition entitled Helio Oiticica: Body of Light, which will travel to the Tate Modern in 2007.