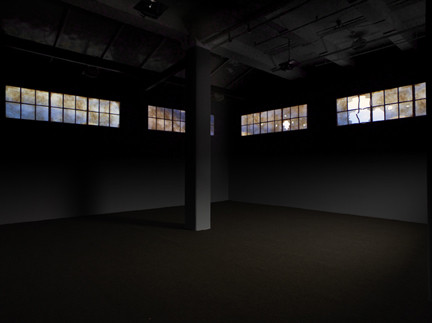 In Krzysztof Wodiczko’s newest multimedia installation, ...OUT OF HERE: The Veterans Project, viewers experience a visual and aural narrative conveying the complex psychological and emotional impact that combat has on both military personnel and civilians. Based on interviews and encounters with veterans and civilians from

Iraq and Afghanistan, ...OUT OF HERE places the viewer inside the conflict but just out of harm’s way, illustrating the horrors of war while calling attention to the fact that only those who directly experience war can truly understand its effects. ...OUT OF HERE: The Veterans Project is Wodiczko’s fourth solo exhibition at Galerie Lelong and will open on Friday, February 11th from 6 to 8 pm. The artist will be present.

As viewers of ...OUT OF HERE, we enter a darkened gallery space, with the only source of light being projections of horizontal windows along the perimeter towards the ceiling. We are inside looking out into the sky, and soon events unfold outside below our view. Innocuous sounds of daily life—a child bouncing his ball, women calling to each other, a truck stopping and unloading—are interrupted by sounds of gunfire and active combat. In a moment, our sense of distance and security is suspended; the distinction between observer and participant is breached. We cannot see the events occurring or the people’s faces—we perceive only a palpable level of fear, disorder, and panic. Wodiczko will also present Flame, 2010-2011, a video with sound recording of an attack on a U.S. convoy in Afghanistan. The work depicts a solitary flame flickering in synch with the sounds of the attack, and is on view in the adjoining gallery.

Wodiczko is most known for his large-scale projections on public buildings and monuments that explore the relationships between communities, history, and public space. In recent years, Wodiczko’s work has dealt extensively with trauma and healing. His public video projections of the past decade—including work with Hiroshima survivors, victims of gun violence in Boston, female survivors of violence in Krakow and Tijuana, and immigrants in the U.S. post-9/11—have each honored individual stories of pain, loss, and perseverance. With ...OUT OF HERE, Wodiczko presents a collective narrative of events taking place today in Iraq and Afghanistan, where in the darkness of the gallery, viewers are left with an indelible impression.

The Institute of Contemporary Art, Boston presented the first version of ...OUT OF HERE in November 2009. The United States section of the International Art Critics Association (AICA-USA) recently named the exhibition one of the best architectural or design shows of the season and will present Wodiczko and the ICA with an award at its annual awards ceremony in March. For the presentation of ...OUT OF HERE at Lelong, the artist has incorporated a new element referencing current political events.

In addition to ...OUT OF HERE, the artist’s recent projects include the War Veteran Projection in Warsaw (2010); Veteran’s Flame, shown at Wzgórze Partyzantów [Hill of the Partisans] in Wroc?aw, Poland (2010) and in the quadrennial PLOT09, organized by Creative Time at Governor’s Island, New York (2009); and Guests at the 53rd Venice Biennale (2009). In 2010, Wodiczko was appointed Professor in Residence of Art, Design and the Public Domain at Harvard University’s Graduate School of Design. On February 15th, Black Dog Publishing will issue the most comprehensive monograph on Wodiczko’s work to date, featuring photographs, documentation, and writings from the past 40 years.
www.galerielelong.com