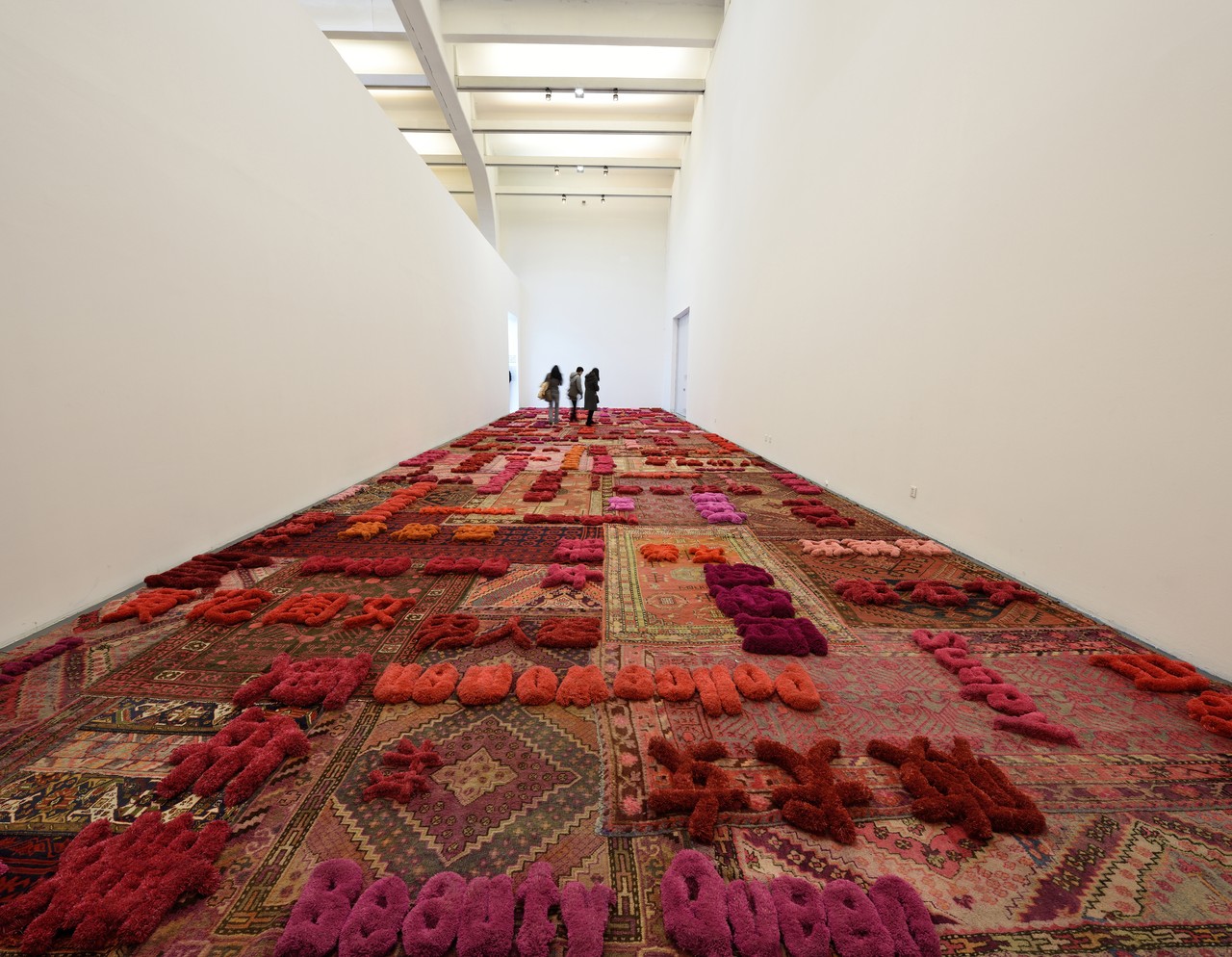 Galerie Lelong & Co. is pleased to present Protruding Patterns, a solo exhibition of work by Beijing-based artist Lin Tianmiao that will transform the main gallery with woven carpets. For the first time, viewers are encouraged to touch Lin’s intricate, labor-intensive work with textiles and thread. The artist will be present at the opening reception on Saturday, September 9, from 6-8pm to discuss her work and meet visitors.

Over the past six years, Lin has collected around 2,000 words and expressions about women in various languages. Pulling from popular novels, newspapers, the internet, and colloquial dialogues, she has gathered phrases such as “divinité,” “Mori girl,” and “leftover women.” Some are predictably derogatory to women, demonstrating the continued ubiquity of sexist attitudes reinforced by language, while others are directly recovered from obsolescence, representing the nuanced mix of confusion, humor, self-deprecation, and empowerment that accompanies the shifting consciousness of women. This lexicon is woven into thickly raised wool forms so that viewers can feel the visceral and literal protruding patterns while touching and walking on the carpets.

By making visible and tangible the various definitions of womanhood that transcend cultures and time, Lin creates an immersive platform to explore how women feel within their evolving societal roles. Meanwhile, the examination of feminine semiotics highlights the disparity that still remains between much-advocated gender equality and culturally embedded gender discrimination. Despite the subject matter of the work, Lin Tianmiao eschews the typical, Western label of a “feminist artist” given that the notion of feminism emerged from different social and cultural contexts within China and abroad.

The exhibition will also feature a selection of new paintings and sculptures in the adjacent gallery, which continue Lin’s exploration of “body language.” Sculptures combining bones with ordinary tools create visual puns, akin to her More or Less the Same (2011) series. In one of the new sculptures, bones form the underside of a clothing hanger, while in another a thermometer is embedded into a bone. These contradictory materials blur the line between binaries such as subject and object, yin and yang, and interior and exterior, challenging the distinction between normal and abnormal. For Lin, bones eliminate the boundaries of social classes, cultures, political ideologies, and species in light of a shared mortality.

Lin Tianmiao (b. 1961) is among the first generation of Chinese contemporary artists to receive international recognition. The work Protruding Patterns was shown at the Ullens Center for Contemporary Art, Beijing (2014); Long Museum, Shanghai (2016); and Minsheng Art Museum, Shanghai (2016). Protruding Patterns is Lin’s first major solo exhibition in New York since 2012, when she presented Bound Unbound at the Asia Society Museum and Badges at Galerie Lelong & Co. This fall, Lin will also be featured in Art and China after 1989: Theater of the World at the Solomon R. Guggenheim Museum, New York. Lin will present a solo exhibition at the Shanghai Museum of Glass, which will simultaneously feature her work in the group exhibition Annealing. In Spring 2018, Lin will also present a solo exhibition at the Bund Art Museum, Shanghai. Her work is in many prestigious institutions worldwide including the Brooklyn Museum, New York; Hirshhorn Museum and Sculpture Garden, Washington, D.C.; Centre Pompidou, Paris; Hong Kong Museum of Art; Museum of Modern Art, New York; National Art Museum of China, Beijing; National Museum of Australia, Canberra; M+ Museum, Hong Kong; Seattle Art Museum; Shanghai Museum of Glass; Sherman Foundation, Sydney; and the Ullens Center for Contemporary Art, Beijing.