Petah Coyne: Having Gone I Will Return 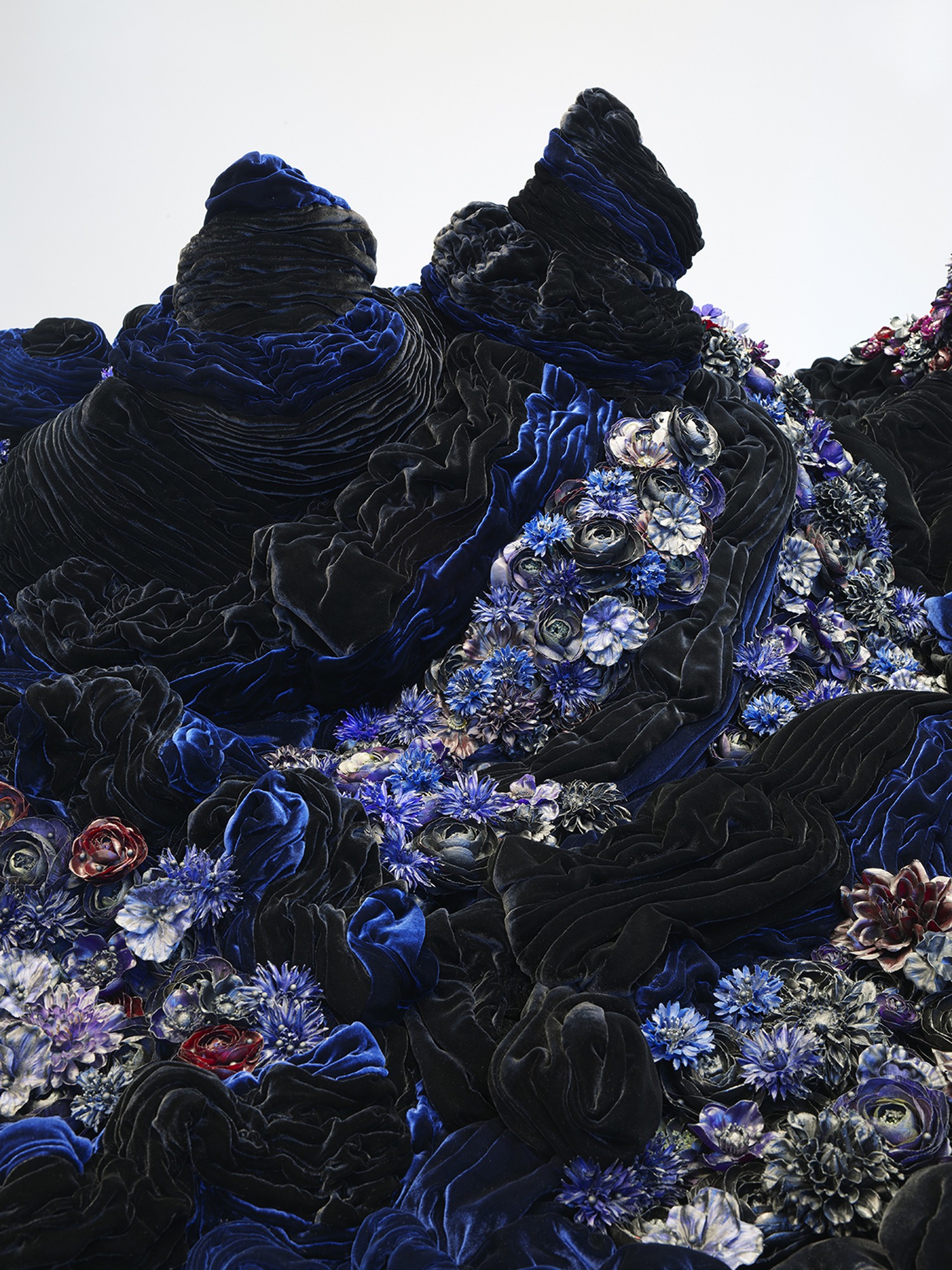 Petah Coyne, "Untitled #1379 (The Doctor's Wife)", 1997
Galerie Lelong & Co. is pleased to present Having Gone I Will Return, a solo exhibition of new and recent work by Petah Coyne. In her first solo exhibition in New York in nearly a decade, Coyne conceives ambitious tableaux that evoke cross-cultural themes of vanity, grief, and tragedy.

Her richly layered, deeply psychological sculptures evince a long-standing interest in literature and literary figures, from Bruno Schulz to Joan Didion, and Japanese literature and film in particular. The exhibition title, Having Gone I Will Return, is an English translation of two Japanese terms for saying goodbye taken from Richard Lloyd Parry’s Ghosts of the Tsunami. Coyne often ties these tales to her own personal narratives of family and friends lost.

The centerpiece of the exhibition, Untitled #1379 (The Doctor’s Wife) (1997–2018), is a sprawling sculptural landscape composed of handsewn Venetian velvet, silk flowers dipped in wax, a hanging structure, and cast statuary enshrouded in fabric. For the first time, a special viewing platform will allow viewers to gaze downward onto Coyne’s work from above. The work recalls the novel The Doctor’s Wife by Sawako Ariyoshi, one of the most renowned Japanese women writers. It spins a twisted tale inspired by Hanaoka Seishū, a real-life Japanese surgeon, the first to successfully utilize general anesthesia. Invoking the melodrama between his mother and young wife, The Doctor’s Wife forewarns against competition among women, the kind that ultimately keeps men in power.

Coyne’s work takes the form of richly adorned gates in Untitled #1388 (The Unconsoled) (2013–14), which is influenced by three Japanese authors and their writings: Kazuo Ishiguro’s The Unconsoled, Haruki Murakami’s The Wind-Up Bird Chronicle, and Kōbō Abe’s The Woman in the Dunes. Like the novels, the birds of Coyne’s sculptures seem to take an enthralling plunge into the dark depths between inescapable knowledge and uncertainty.

The smaller gallery will feature a site-specific installation of several sculptures suspended from the ceiling. Untitled #1242 (Black Snowflake) (2007–12) refers to Masuji Ibuse’s novel Black Rain. The fallout from the bombing of Hiroshima, which stained the skin and especially ostracized women who bore its mark, is expressed as a chandelier-like structure from which mysterious jewels appear to sprout. This is offset by works in white, such as Untitled #1410 (Mishima’s Spring Snow) (2015–16), whose height allows viewers to look upward into the sculpture’s wintry bowels, a mixture of materials that conflate the sartorial (ribbons, silk Duchesse satin, thread) with the industrial (wire, cable, steel).

A catalogue will be published in conjunction with the exhibition, featuring an essay by Jenni Sorkin, Associate Professor, History of Art & Architecture, University of California, Santa Barbara.