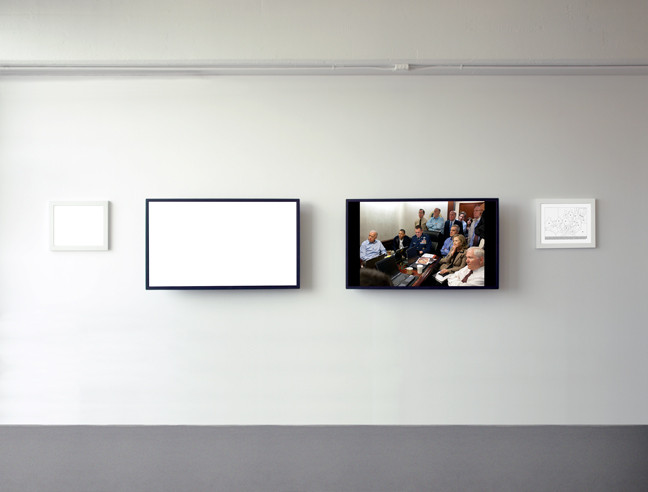 Alfredo Jaar
May 1, 2011, 2011
Two LCD monitors and two framed prints on archival paper
Full installation: 210 x 28 inches (533.4 x 71.1 cm)
The context surrounding an image, or its isolation without context, addresses the question of how the framing and re-framing of images influences our understanding of what we see and more broadly, of history. This exhibition brings together Sarah Charlesworth, Juan Manuel Echavarría, Felix Gonzalez-Torres, Alfredo Jaar, Emily Jacir, Susan Meiselas, and Krzysztof Wodiczko, who demonstrate exceptional moral and formal rigor in their analysis of contemporary reality.
Sarah Charlesworth (1947-2013) is most often associated with the “pictures” generation of post-modern artists who came to prominence in the 1980s, using photography to construct and critique reality by employing familiar imagery. This is keenly apparent in Charlesworth’s work, Nouns, 2003, from her Modern History series. In Nouns, Charlesworth creates an imaginary front page of the New York Times in which only nouns and photos remain from the actual news sources.
A published writer before turning to video and photography, Colombian-born Juan Manuel Echavarría (b. 1947), uses an ancient form of communication – the oral tale – in his video Bocas de Ceniza (Mouths of Ash), 2003-04, to make present the humanity of individuals who experienced the atrocities of Colombian paramilitary actions over the last fifty years. Echavarría reframes the disembodied experience of reading an account in a newspaper to a direct, emotional experience in which we are participants and partners.
Felix Gonzalez-Torres (1957-1996) noted that the New York Times was one of his constant inspirations. He created his iconic "paper stack" works in the late 1980s and early 1990s. Manifestations of these works are made of neatly stacked sheets of paper and several of the works are printed with text or imagery from the Times. Gonzalez-Torres’ “paper stacks” are part of his paradigm of critique and generosity and allow for viewer participation. In "Untitled" (Beautiful), in conjunction with Louise Lawler, 1990, Gonzalez-Torres examines the repetition and recontextualizaion of an image. The image of Trident II, an expensive, broken war weapon, descending into the ocean with the word “Beautiful.” below it, is equally arresting and simple.
May 1, 2011 (2011) by Alfredo Jaar (b. 1956) depicts a controversial media image which was nonetheless published widely internationally: the Situation Room of the White House, as the President and his Cabinet learn of Osama bin Laden’s assassination. Jaar adapts this scene in which the most important image is off screen and juxtaposes it with a white screen, symbolically representing the absent images. Jaar questions the meaning and responsibility of the visual and its power to transform a democracy.
Silenced historical narratives, resistance, and movement are recurring concerns in Emily Jacir’s (b. 1970) photographs, videos, and multi-media installations. Material for a film (2004 – 2007) was based on the life of Wael Zuaiter, a Palestinian poet living in Rome in the 1970s. Jacir created an archive which included both re-articulated unknown items of Zuaiter’s ephemera, (including family photographs and correspondence) and documents connected to his assassination. Her own photos and writings, and interviews she conducted, comprise the bulk of the project. A selection of images from Material for a film work will be dispersed throughout the exhibition.
Molotov Man is a photograph from Susan Meiselas’ (b.1948) landmark 1979 photo essay, In Nicaragua, which documented the final weeks of the Somoza dictatorship, the insurrection, and the Sandinistas’ victory. The photograph of “Molotov Man” depicts Pablo 'Bareta' Arauz, throwing a Molotov cocktail at one of the last remaining Somoza National Guard regiments, one day before Somoza would leave Nicaragua. Immediately chosen for publication by a variety of news agencies, the image became a symbol of the Nicaraguan revolution, and subsequently the artist’s authorship of the image diminished.
Krzysztof Wodiczko (b.1943) has championed access for the voiceless in our society over the last four decades. In Hiroshima Projection, 1999-2000, commissioned to commemorate the 50th anniversary of the bombings of Hiroshima and Nagasaki, Wodiczko filmed the hands of bombing victims from three generations who speak of the lasting effects of war and trauma. Wodiczko’s confrontational images expose the psychological, ethical, and political fallout of the bombing.
Each artist in Re-Framing History exemplifies a global awareness of history and the powerful responsibility of images in their individual practices. As pictorial representation becomes less trustworthy, the ways in which artists use imagery, modified or original, helps us to understand histories and cultures and examine the values and perceptions in society.
www.galerielelong.com