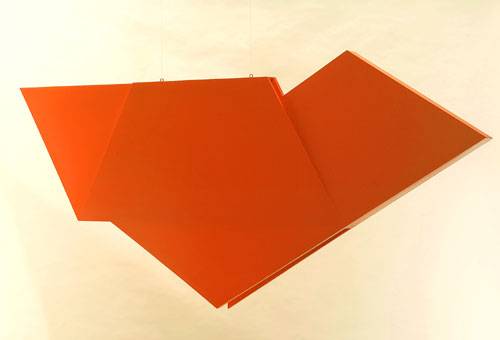 Spectrum explores monochrome as interpreted by artists of different generations and with different approaches to art-making. The show is an open-ended experiment in grouping one-color-only works, arranging them in chromatic order. Each work, whether it is sculpture, painting, print or drawing, will have a unique role in a progression of color. Organized by Kate Shepherd, Spectrum will open to the public on Friday, December 9th, from 6 to 8 pm.

For each of the artists, the choice to employ monochrome demonstrates decisiveness and commitment, whether that decision originated from emotional, intellectual or symbolic motivations. Some of the artists in the exhibition are completely identified with monochrome (Kelly, Klein, McCracken, Thursz), while others employ the restriction as a more singular experiment.

In the Fifties and Sixties, the investigation of monochrome was a radical one that took place during a restructuring of traditional practices. Yves Klein (1928-1962) and Hélio Oiticica (1937-1980) are exemplars of such early investigations. The monochrome can also relate to the natural world in a more abstract way; Ellsworth Kelly has explained that his flat shapes of color have originated from observations in nature. For some of us, our first aesthetic experience of monochrome was in popular culture with The Beatles’ White Album, first released in 1968. Its cover was designed by Richard Hamilton and was originally made as an artist’s multiple.

Many of the sculptures in the show are inherently monochromatic, due to the materials used in their creation. Color is inherent in Josiah McElheny’s mirror, Karin Sander’s plaster, Rachel Foullon’s paper, and Helen Mirra’s “line work.” With some of the works, paint is used in ways that are untraditional to art-making: Francis Cape color-washes his sculptures in keeping with English cabinetry, and John McCracken uses industrial methods to achieve his seamless surfaces. In works that use artist’s paint, color can either serve as a base for an image or be the “subject” itself. Robert Mangold draws a line upon a color ground, while Dan Walsh draws with color on a white ground. Artists such as Angela Dufresne and Gillian Carnegie have returned to detailed figuration, and in a different tactic, John Beech uses representational images and then obliterates them with a mask of color. Finally, Felix Gonzalez-Torres’ candy piece encourages viewer to ingest the color, by eating a peppermint candy.

At times subjective or symbolic, and at times coolly practical, the works in Spectrum display the myriad ways artists deal with a singular color choice. The dialogue between the different works demonstrates how the use of a single color can serve as its own implicit and explicit language.