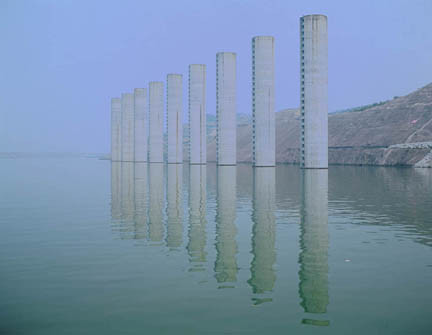 Galerie Lelong is pleased to present Interventions in the Landscape, a group exhibition of photography and film that explores how artists have inserted themselves and their subjects into the landscape and engaged, manipulated, transformed, or been transformed by their surroundings. A selection of gallery and invited artists will be on view, working within a variety of locations and spanning the last five decades.

In each of the exhibited works, rather than presenting the landscape—whether it be rural, urban, or natural— as a mere visual backdrop, the artist mobilizes and fully integrates this component into the activity of the piece. The landscape’s visual passivity is obliterated as it becomes an acting member of the scene. The agency can also be reversed. In many works the landscape will function as the catalyst, with natural forces such as wind, waves, and gravity working to both propel and hinder the artists’ movements.

Within this approach, a number of themes emerge among the work. Alfredo Jaar, Hélio Oiticica, Krzysztof Wodiczko, and collaborators Ann Carlson and Mary Ellen Strom incorporate the landscape as a medium for social discourse. Activating an array of sites charged with social and political connotations, these artists give voice to the terrain, allowing it to enter into an exchange with the subject and viewer.

For others, the traditional painterly notion of the landscape is enhanced to produce a more engaged environment. Andy Goldsworthy, Ana Mendieta, and Dennis Oppenheim examine the relationship between humans and the natural environment by inserting materials into the landscape and forcing the environment to exert itself upon the scenario. Each artist introduces the subject and then allows the landscape to continue the action, altering and often defeating the subject. Rosemary Laing and Catherine Yass are concerned with the human relationship to the built environment, using the landscape to examine perceived realities of physical and psychological space.

The landscape has also been cast as a central partner to the performing artist. In works by Vito Acconci, Joan Jonas, Anna Maria Maiolino, Gordon Matta-Clark, and Cildo Meireles, the artists enlist their surroundings and the natural elements to inform their movements. For some it is a play, for others it is a struggle to ascertain which entity is in control.

Petah Coyne and Jane Hammond use the landscape as paradigmatic of photography in order to upend the medium itself and challenge its representation of events. Each known for working with a wide variety of materials in a methodical practice, the artists manipulate the landscape as another material.

Overall, the diverse works exhibited in Interventions in the Landscape shift the passive, traditionally static landscape into a dynamic participant in the action brought forth by the artist.
www.galerielelong.com