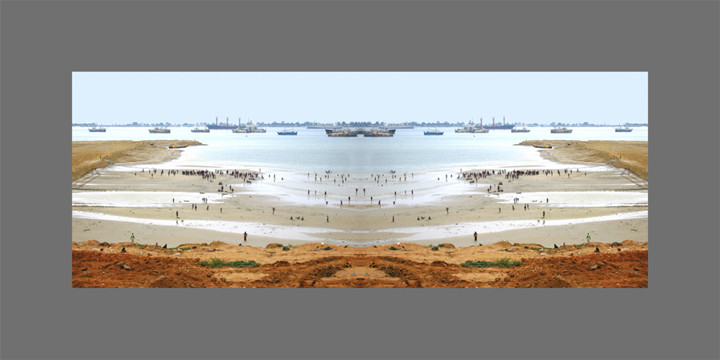 In Summer Exposure, Galerie Lelong presents photographic works with a focus on artists of the gallery who examine the function of a photograph to document or to construct. The works explore themes of political and social injustice, identity, and contemporary conflicts between man and nature. The exhibition features straight and manipulated photographs, many of which have rarely been exhibited, in a range of formats including silver gelatin prints, C-prints, light boxes, mixed media, and collage. Several artists are not immediately associated with photography, yet the selected works mark an important facet of their oeuvres.

The exhibition was inspired by Alfredo Jaar’s current representation of Chile in the 55th Venice Biennale. As is true for many of the works in Summer Exposure, Jaar’s Double Vision (2005) is an exercise in seeing. Jaar examines the dichotomy between the authority of images and their inability to fully convey the events they depict. Double Vision portrays children playing on a beach, with signs of Angola’s oil wealth in the background. The mirrored effect of the image highlights the disparity between the extraordinary wealth of the elite and the lack of significant health and social programs for the country’s struggling citizens. Susan Meiselas’s compelling images also reveal a concern with complex socio-political issues, underscoring this theme that runs throughout the exhibition.

Several artists manipulate their photographs through complex processes that are not easily discerned. Jane Hammond’s seemingly vintage silver gelatin prints are actually contemporary collages, built narratives that convey the fluidity of an image’s meaning. Catherine Yass’s signature technique of layering a color transparency over a blue negative transparency results in richly colored, surreal images mounted in light boxes. Lighthouse (East) (2011) explores the relationship between the physical and psychological space of the structure, blurring the line between reality and illusion.

Jaume Plensa and Lin Tianmiao create works on paper that begin with a photograph. Plensa alters portraits of individuals, diminishing references to gender, race, and age, and uses language to convey notions of the individual and humanity as distinctive yet universal. Lin’s works from her Focus print series (2007) begin with a soft-focus portrait, the surface of which she mars with holes and eruptions to create a ghostly, androgynous presence.

Many of the artists in the exhibition use photography as a means to document ephemeral moments. Petah Coyne’s abstract photographs capture blurred details of brides and debutantes in motion. Her striking black and white photographs create fragmented images that express fleeting beauty and the turbulence of contemporary life. Andy Goldsworthy and Rosemary Laing stage transitory interventions in the landscape. Goldsworthy’s serial photographs record the effects of time and the relationship between humans and their surroundings, conveying the beauty in loss and regeneration. Laing’s thematic series witness staged events in her native Australia to examine social and political issues of landscape and its use. Ana Mendieta’s images record the momentary action of her performance works, which investigate the body, landscape, and notions of permanence.