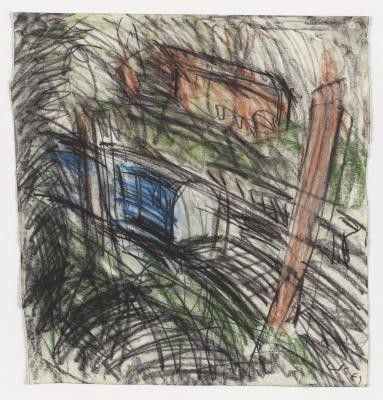 Leon Kossoff, let’s say it straight ahead is practically unknown in France, no museum, no art center, no private gallery has ever dedicated a show of his works. However he is very well known in his home country: Great Britain, and especially London where he was born in 1926, grew up, and still lives today. He is thought of as one of the most significant English artists of the 20th century.This exhibition in Galerie Lelong focuses on the artist’s drawings and paintings, depicting the city of London, spanning the artist’s career, from bomb-sites from the early 1950’s to a recent series of drawings of Arnold Circus. Many of these works have rarely been shown before. Since the mid 50’s, Kossoff has constantly being focusing on representing his hometown, station and railway bridges buildings and demolition sites, schools, churches, busy streets with commuters and market. A bit like Morandi painted the same bottle over and over again in Bologna. London Landscapes in Galerie Lelong will be for many visitors a revelation and a surprise. Kossoff was born in 1926 in Islington in a Jewish-Russian family. In 1939, he hid himself in Norfolk. Back in 1943, he studies at St Martin’s school of Art. He studies from 1950 to 1952 with David Bomberg. He meets Frank Auerbach with whom he shares the deep interest for painting. In 1956 he joins Helen Lessore’s Beaux Arts Gallery, in 1959 starts to teach at Chelsea School of Art and St Martin’s School of Art.
He shows with Marlborough, Fischer, Bernard Jacobson, Anthony d’Offay and Annely Juda. In 1995 he represents Great Britain at the Venice Biennial. He had an important retrospective show at the Tate in London in 1996, in the Louisiana Museum, in Copenhagen in 2004, in the Museum of Art in Lucerne in 2005 and in the National Gallery in 2007. In France, his work has been in the collective exhibition on the school of London curated by Michael Peppiatt at the Musée Maillol in 1998, along with works of his friends Frank Auberbach, Francis Bacon et Lucian Freud. This exhibition is touring to four locations. It is currently shown at Annely Juda Fine Art in London, it will be in Galerie Lelong, starting September 12th and will then travel to Mitchell-Innes & Nash in New York and L.A. Louver in Los Angeles. All four galleries have worked together to make this exhibition and produce a fully illustrated catalogue, with an essay by Andrea Rose, Director of Visual Arts, British Council, and curator of Kossoff’s exhibition at the Venice Biennial in 1995.
www.galerie-lelong.com