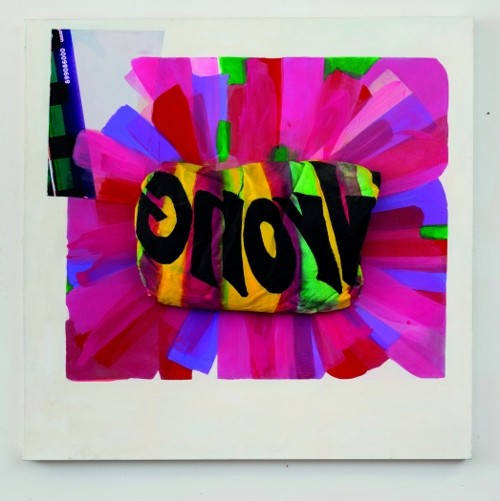 I Made a Terrible Mistake, Find your Own Damn Voice, Wrong: As one might
gather from these three work titles, the paintings of US-American artist Rochelle
Feinstein (*1947) frequently talk. And they are opinionated.

Over the past thirty years, Feinstein—also a long time professor for painting and printmaking at Yale University—has developed an oeuvre that probes the cultural and political implications of art-making in general and painting in particular via an approach that could be described as self-conscious abstraction. Her work has greatly opened up and furthered the current discourse around painterly abstraction. Feinstein seeks to think painting outside of its hereditary commodity status and to employ abstraction as an everyday rather than an auratic means. In her works, Piet Mondrian and Michael Jackson, Malevich’s Square and the I ♥ NY logo meet at eye-level. Rather than with a conflation of the High and Low, Feinstein’s work is concerned with the question of how to call upon ubiquitous tropes of art and the everyday, and to infuse them with a meaning that goes beyond their common connotations.

How, she asked herself when working on her painting Smile (1994), can one unite two ubiquitous (smiling) figures—the Mona Lisa and the Smiley Face—into one abstract painting? The resulting bright yellow work combines the Gioconda’s unfathomable smile with the typical Smiley colors. While quoting the formal language of American Color Field painting of artists such as Mark Rothko and Barnett Newman, Feinstein’s Smile substitutes their grandiosity for contemporary and quotidian references.

The presentation at Lenbachhaus focuses on the artist’s painting installations and series developed since the mid-1990s. In the multi- panel installation Before And After (1999), for instance, Feinstein presents painting as a demystified activity beginning as a supply item (a piece of canvas) and resulting in a (bubble-) wrapped object in a storage rack. Highlighting the studio process as well as the very material aspects and objecthood of painting, Feinstein’s work also raises questions about art that lacks representation and audience.

Another series on view is The Estate of Rochelle F. (2009-2010), a ’pre-post- humous’ estate assembled by Feinstein in response to the financial crisis of 2008.
For the creation of the Estate works, the artist imposed a set of rules including a prohibition on new materials. Instead, Feinstein used supplies at hand: dishrags, bulky birthday presents and some of her own previous artwork. Typically dead-pan, the artist’s Estate is a contemplation on the finiteness of life and the permanence of the stuff that we accumulate. The way in which language, or speech to be precise, is present and intersects with the image in Feinstein’s work deserves particular attention. Work titles take the form of commands or are formulated as first-person statements; comic-style speech bubbles recur in paintings and photographs, their tails pointing to nowhere. The question of who addresses whom is a constant one in this oeuvre. To Feinstein language is both aid and obstacle, and, in this regard, it is similar to (abstract) painting.

The exhibition is one of three chapters of an exhibition tour co-organized with the
Centre d’Art Contemporain Geneva and Kestner Gesellschaft, Hannover.