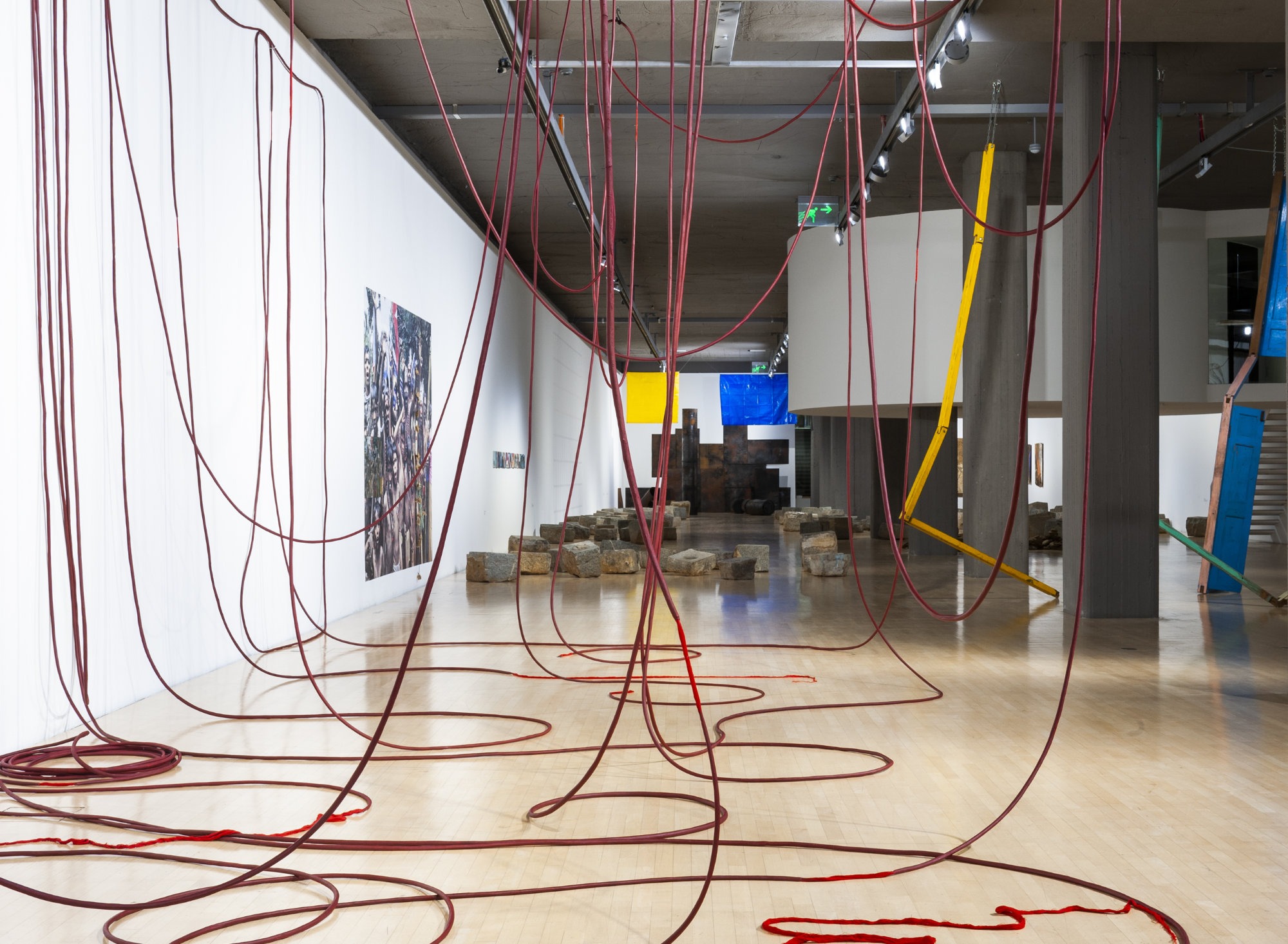 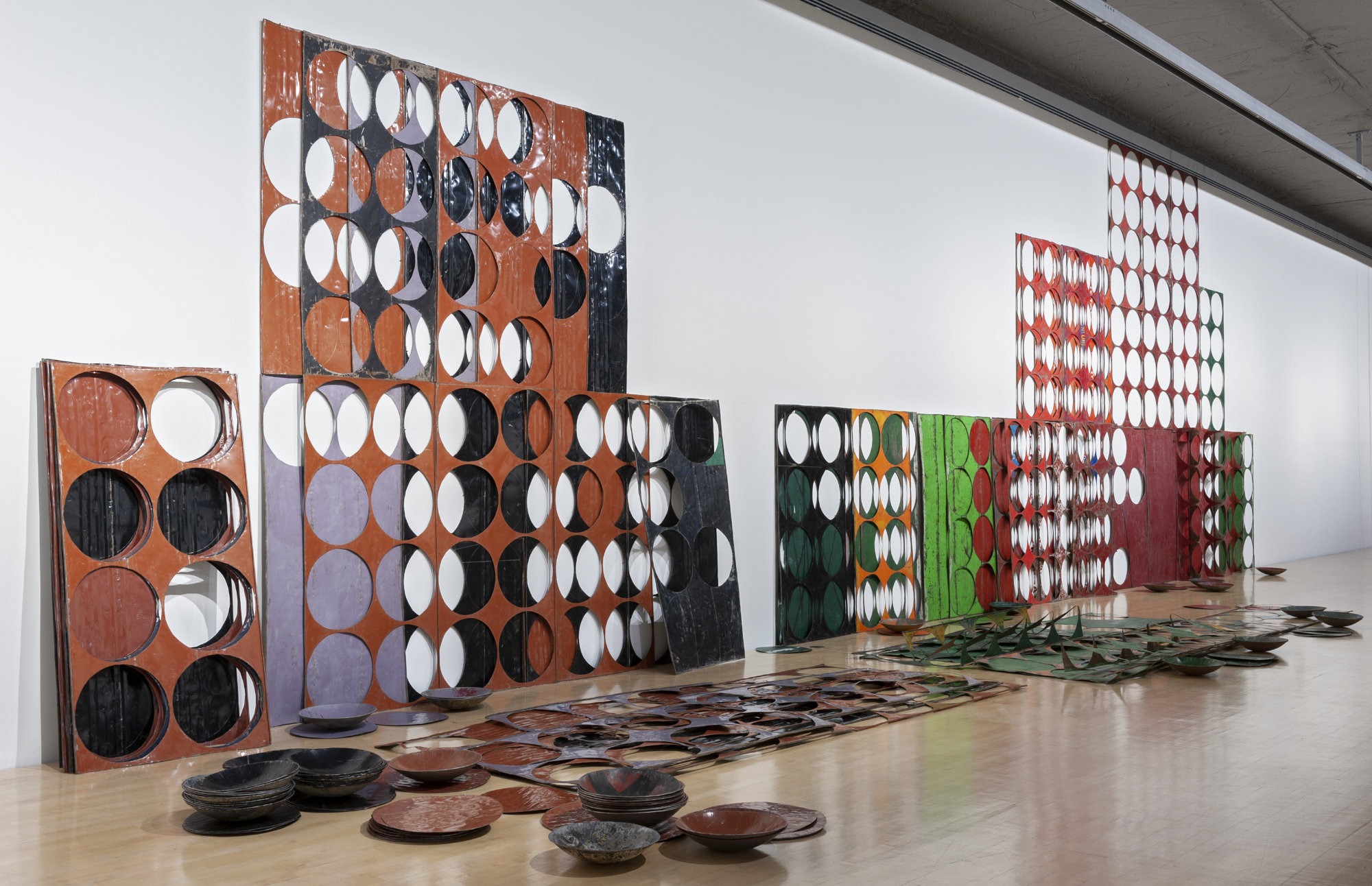 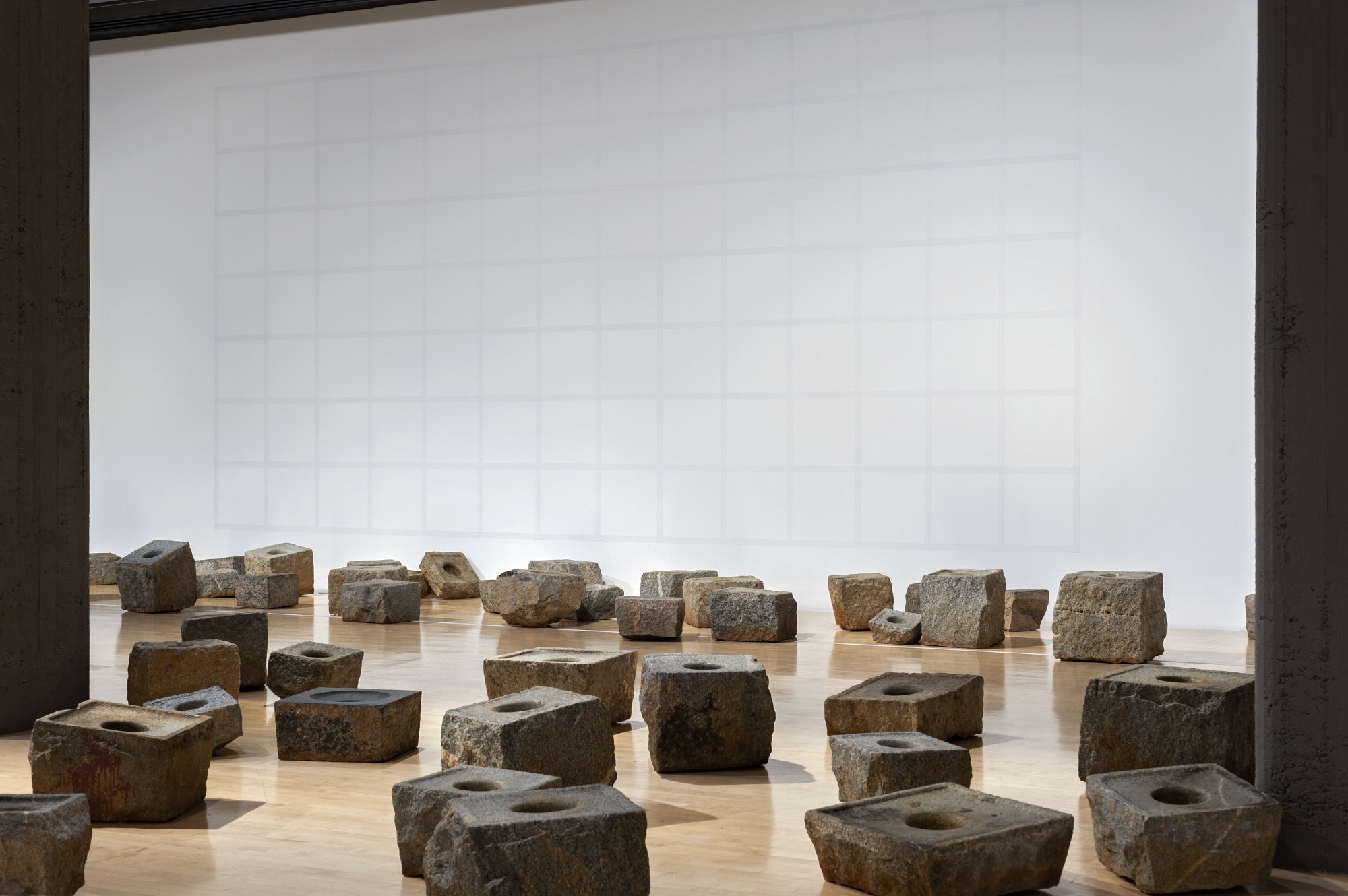 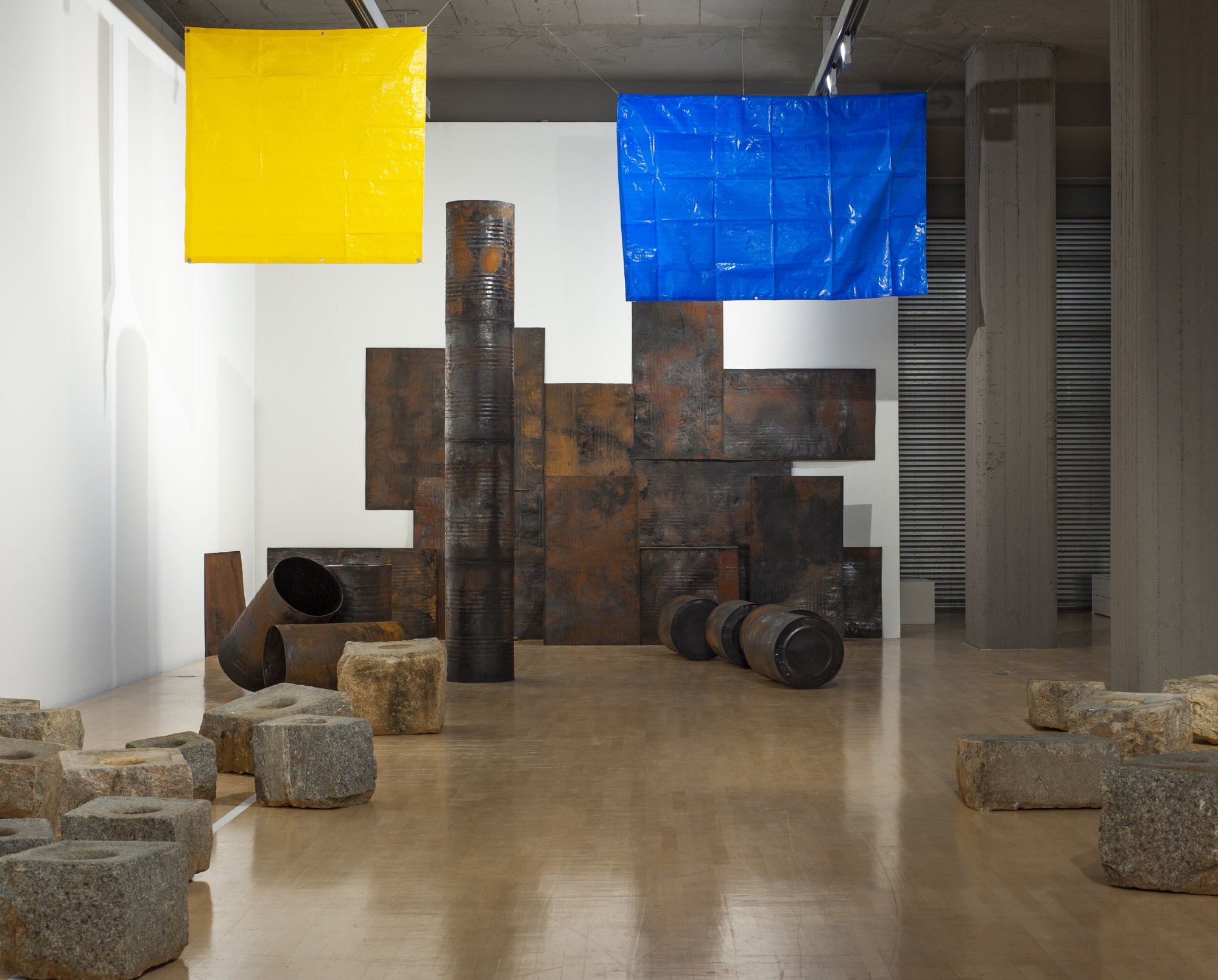 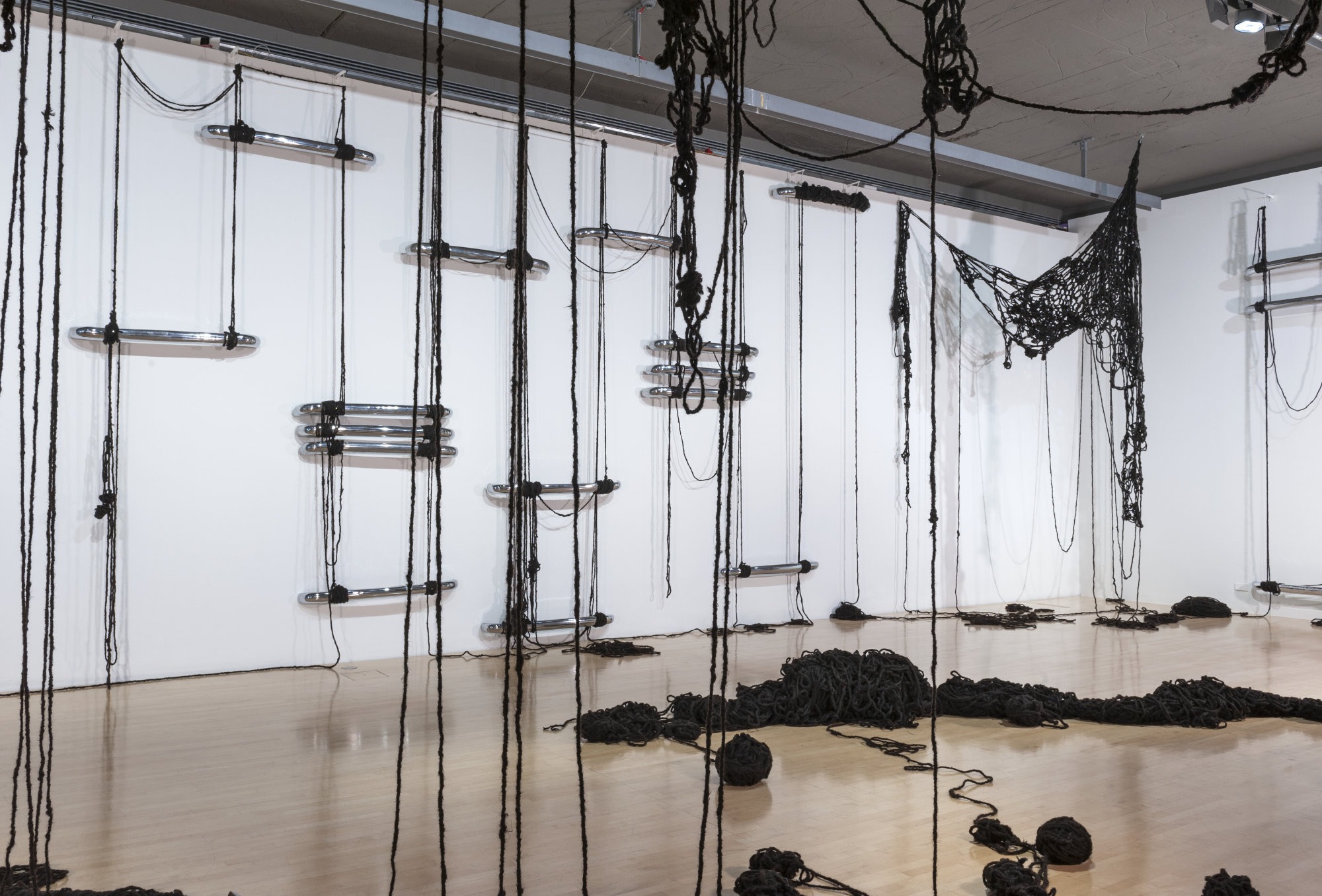 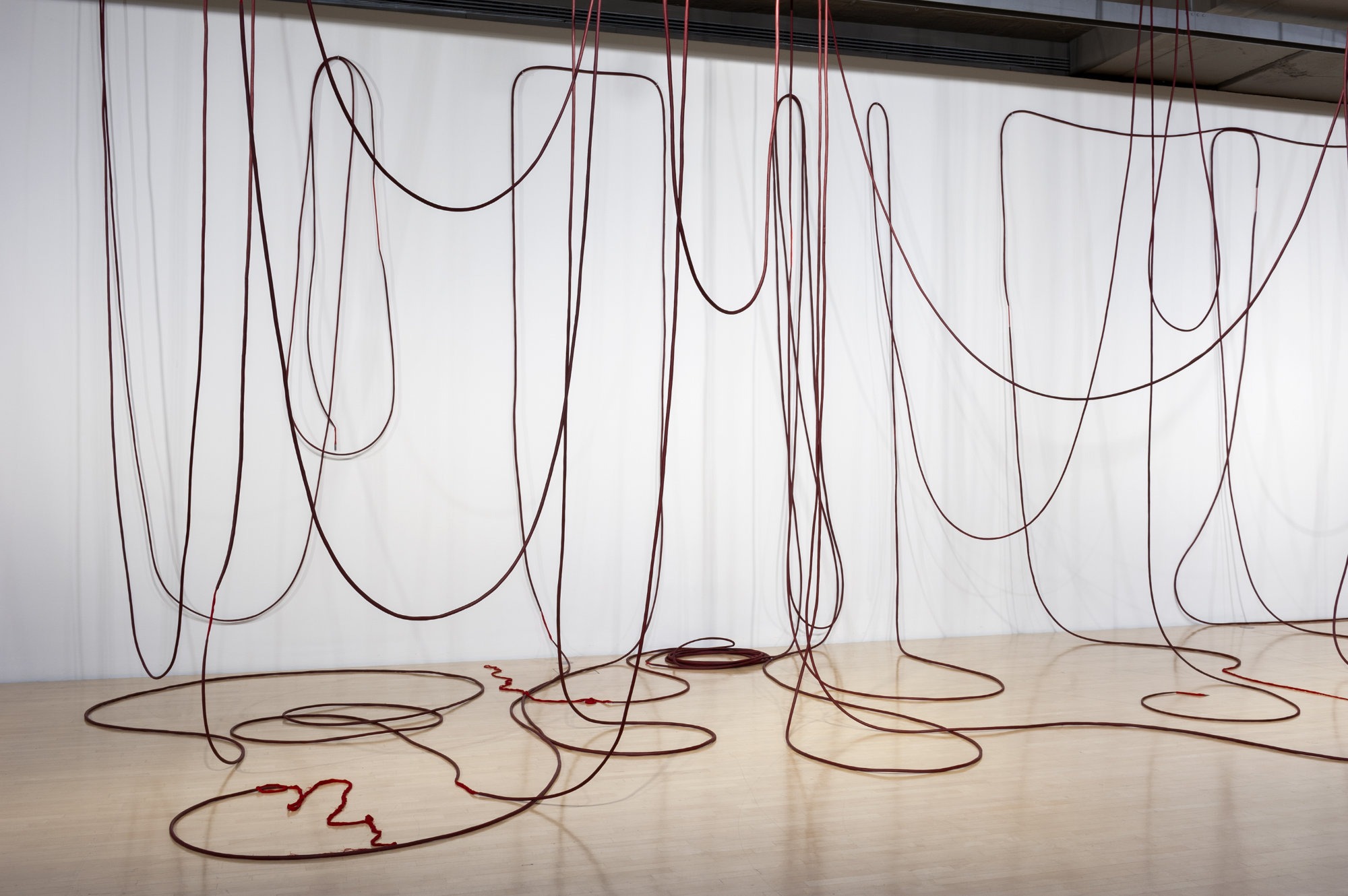 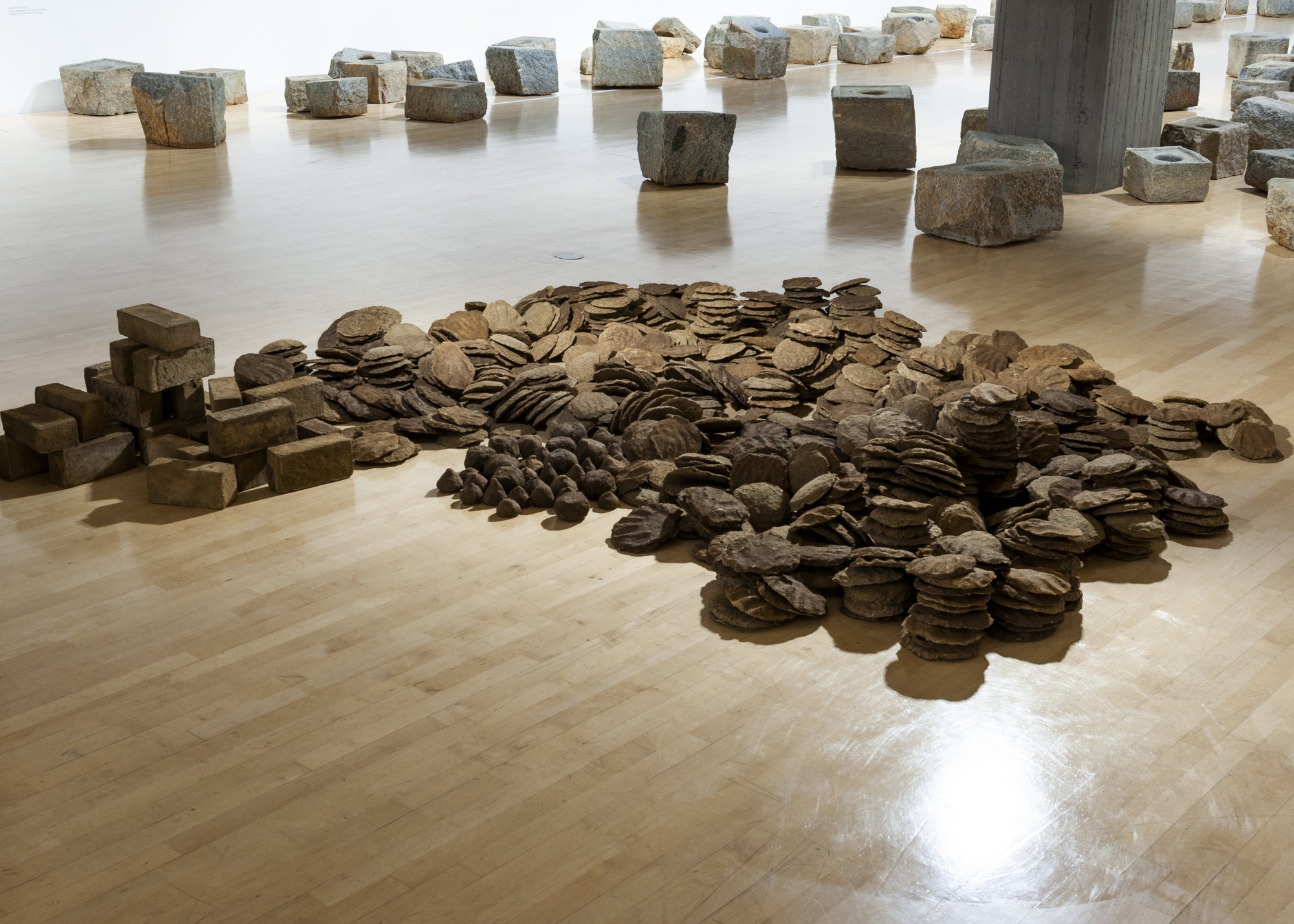 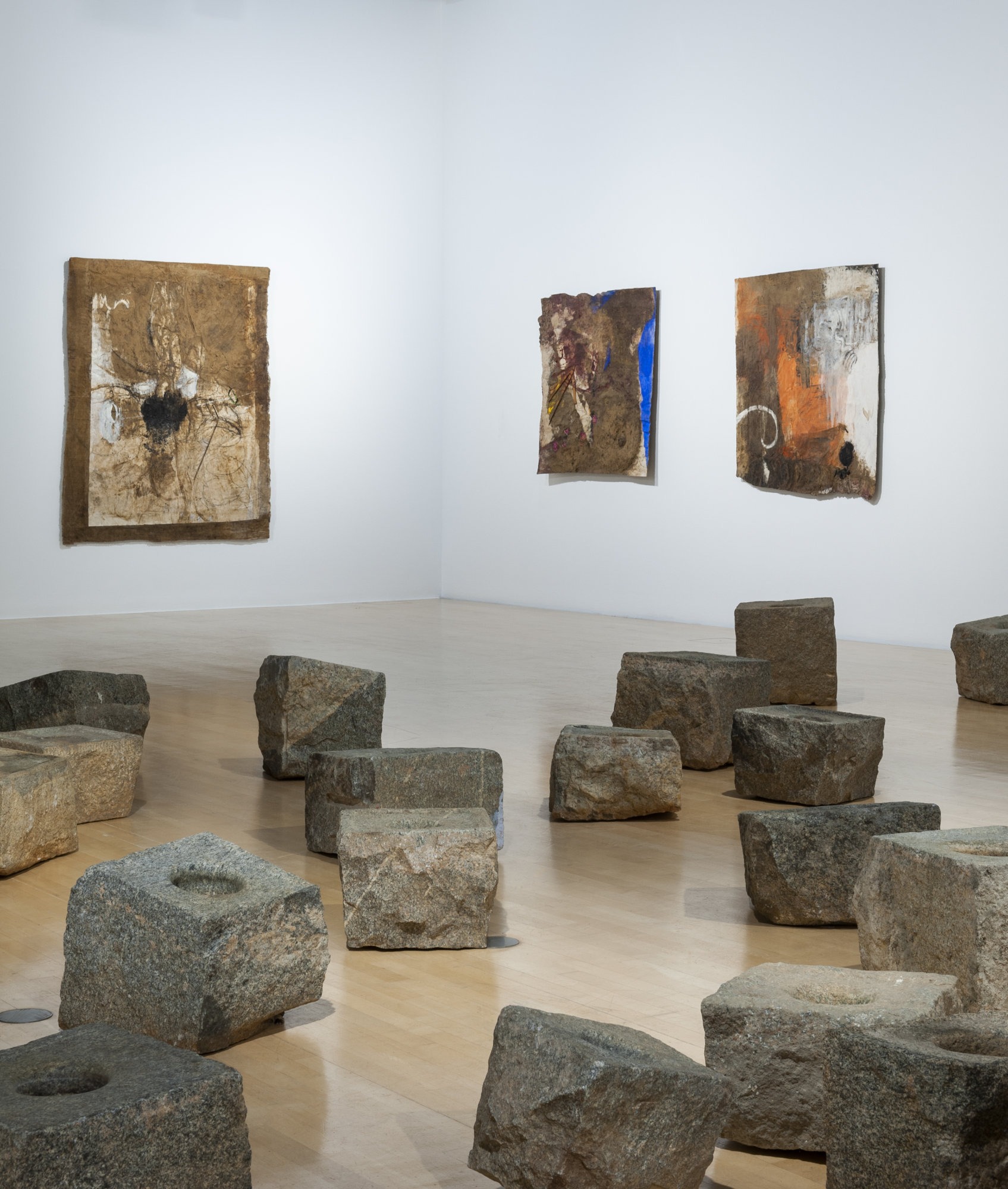 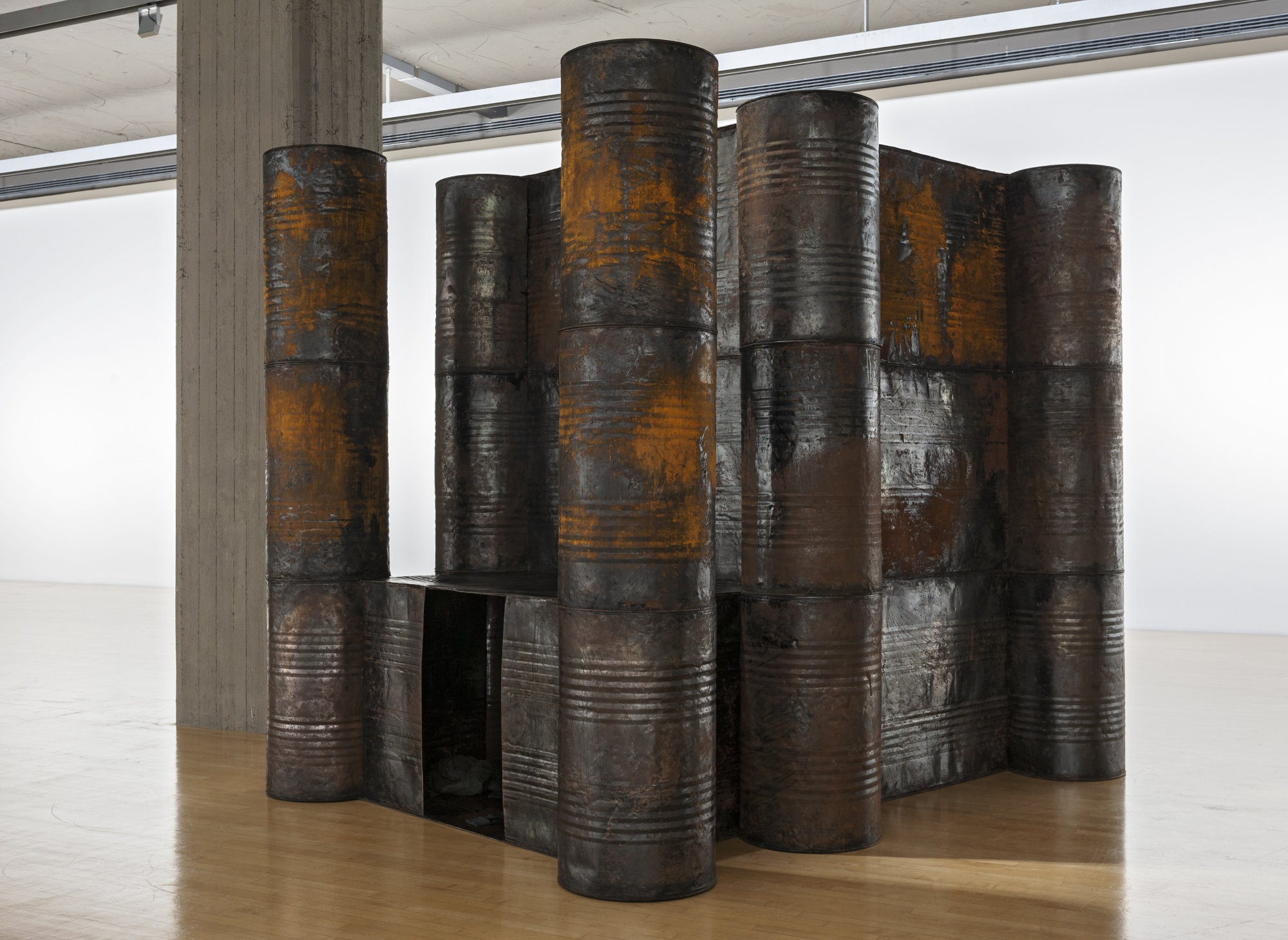 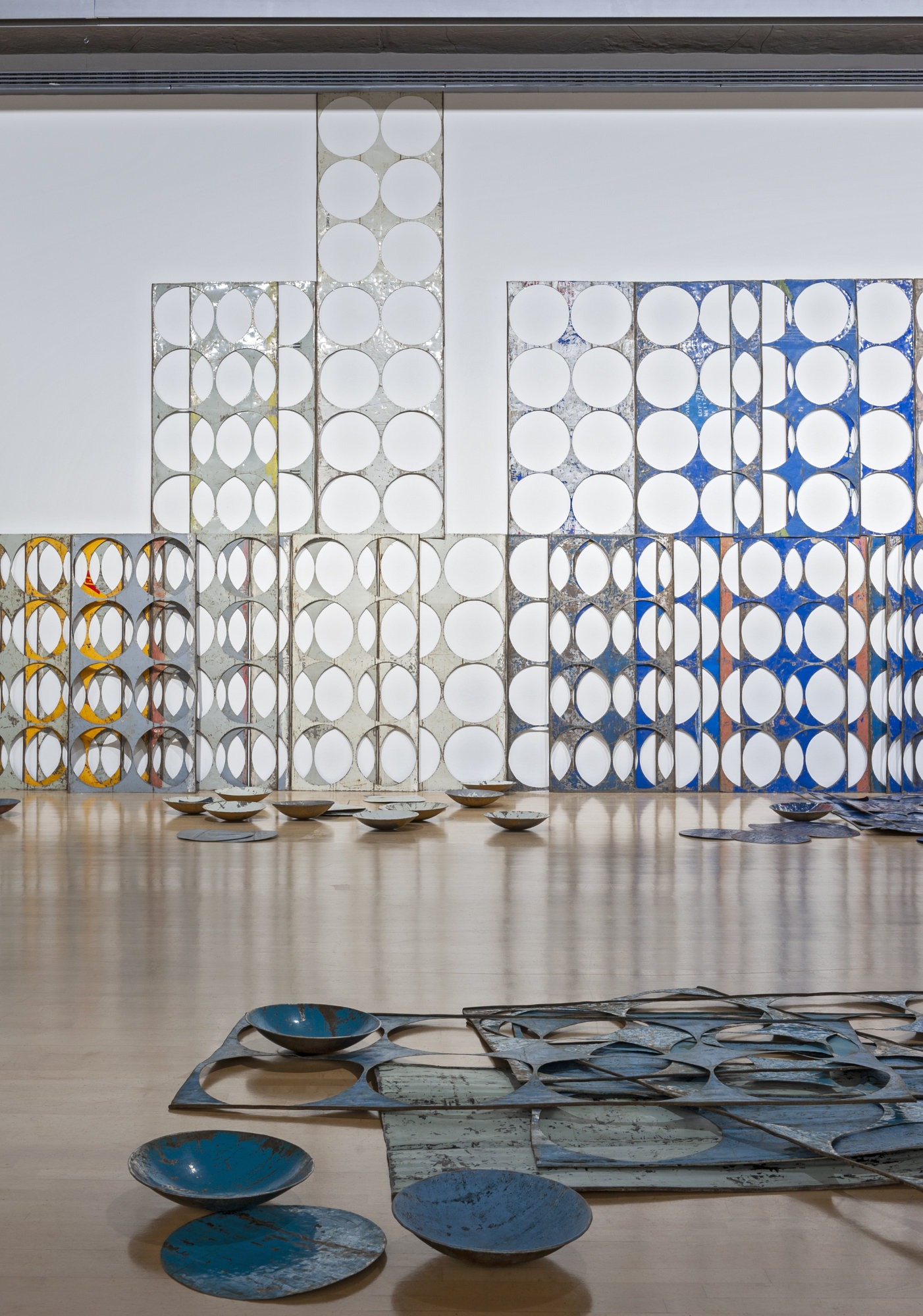 Sheela Gowda (b. Bhadravati, India, 1957) lives and works in Bengaluru. The Lenbachhaus presents her first solo exhibition at a museum in Germany.

For her sprawling installations, Gowda uses distinctive materials from her country whose nature, colors, and scents endow her works with a narrative as well as metaphorical force. The creative use of cow dung, kumkum powder, coconut fiber, hair, needles, threads, stones, tar barrels, or tarpaulins blends connotations of manual craftsmanship and practical application with poetic intensity for a meditation on both urban and rural life in India.

Working conditions, production cycles, urban infrastructure, traditional and modern life are recurrent concerns in Sheela Gowda's art. She seeks out the materials that are best suited to representing these themes and translates them into works with rich narrative and associative subtexts. Her materials and their creative handling tell stories both about cultic and spiritual practices and about the economic and functional benefits extracted from them. Her works tie in with questions of productivity as well as rituals of daily life in a traditional society alongside an industrial one.

In the late 1980s and early 1990s, Gowda created oil paintings that already anticipated the themes of her mature oeuvre. The everyday life of the Indian middle class, the conflicts that women confront in their working and private lives, and media images of political and social tensions were early subjects of her critical engagement. Her exploration, starting in 1992, of the potential of cow dung as a medium, initially in wall-based works, then also in three-dimensional pieces and installations, eventually set in motion a broader shift toward new materials in her art.

The use of cow dung in her work, Sheela Gowda argues, goes hand in hand with her political consciousness. India's current government has harnessed the cow as a Hindu symbol towards an ultra-nationalist program that first became manifest in the early 1990s. In this situation, Gowda's use of cow dung, a ubiquitous sight in India, gives it a novel and urgent relevance.

The exhibition presents the various phases of her practice: It opens with the first cow dung-paintings from 1992, which are making their debut in Europe at the Lenbachhaus. Installations reappraising found materials such as tar barrels, spice grinding stones, hair, and wood as well as media images mark later stages of her artistic career. A new work using cow dung, conceived especially for our exhibition, is a reiteration of its relevance in the present domestic political scene as it was in the 1990s.