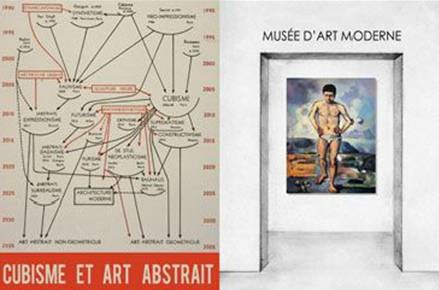 Exhibition curators : Elodie Royer and Yoann Gourmel
In collaboration with the Museum of American Art, Berlin

The Ethnographer and the Natives
Once upon a time there was an adventurous young man. An explorer and ethnographer by nature, he grew tired of travelling and making great discoveries. One day, he heard a story about strange developments among the natives of the Old World. A new style in the manufacture and decoration of art objects had, it was said, spread among the craftsmen of different tribes. But the movement was already dying out, and would soon be forgotten.
Intrigued, the explorer immediately organized a series of expeditions to the other side of the ocean. He visited all the important places, bought paintings and other exotic objects from the natives and recorded the stories they told. He was impressed by what he saw and heard, brought back many artefacts, and decided to open an ethnographic museum which he called the “Museum of Modern Art”.
Shortly thereafter, the explorer organized an exhibition of the two most unusual styles, known as “Cubism” and “Abstract Art”. The exhibition was a great success and it became the basis of the museum’s permanent exhibition. It was also widely imitated by the modern art museums which followed.
The story told through that museum’s exhibition spread under the name of the “History of Modern Art” and it was accepted all over the world. After the First World War, even the natives of the Old World adopted that history as their own. With time, they even regarded it as their own genuine and predominant myth. And so it is that it is still told today, and handed down in countless celebrations and rituals, held yearly or every other year.

The origins of the history known in the 20th century as the “History of Modern Art” might well date back to two shows which were held in 1936 at New York’s Museum of Modern Art: Cubism and Abstract Art and Fantastic Art, Dada and Surrealism, both organized by the museum’s founding director Alfred H. Barr, Jr. Although the two shows were held in New York, the works on view came almost exclusively from Europe. Those exhibitions were based on an American interpretation of European art, as represented through “the tree of evolution” reproduced on the cover of the catalogue for the show Cubism and Abstract Art. After the Second World War, this narrative gradually became the canon of 20th century modern art.
The exhibition Histoires de l’Art Moderne/(Hi)stories of Modern Art (1990 – 2035) is being organized with the Museum of American Art, an educational establishment devoted to the collection, preservation and propagation of the memory of American modern art presented in Europe in the mid-20th century.
www.fraciledefrance.com