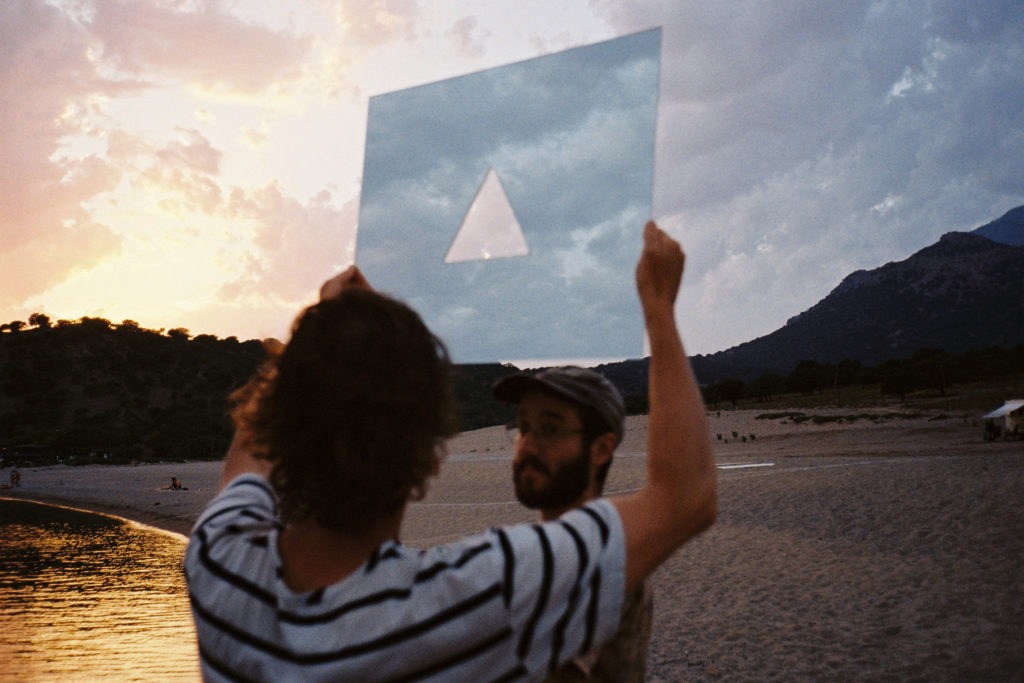 The frac île-de-france presents the first exhibition in France dedicated to the American artist Ben Russell. As an artist, filmmaker, and curator, Ben Russell’s work exists primarily at the site of projection, resulting in an embodied and hallucinatory experience of the documentary image.

La montagne invisible is a multi-screen installation conceived as a journey into the infinite: an immersive multi-channel AV installation that transforms the material of a Finnish wanderer’s secular pilgrimage towards a utopian summit into an infinite video labyrinth of beginnings, endings and disjunctive in-betweens.

Conceived as one chapter of a larger multi-form project entitled THE INVISIBLE MOUNTAIN*, Ben Russell’s work at Le Plateau joins the ranks of Alejandro Jodorowsky, Philippe Parreno, Patti Smith and John Zorn in drawing inspiration from the novella Mount Analogue (1952) by French author René Daumal. Loosely based on the fictional text in which a group of explorers embark on an impossible quest to find a utopian mountain floating in the ocean, THE INVISIBLE MOUNTAIN is centered around a modern day spirit quest that chart a path from Finland to Greece to the Great Beyond.

As an installation, La Montagne invisible will transform the topography of Le Plateau into a network of carefully orchestrated movements in which the journey – the road trip / concert tour / pilgrimage / altered state – is the essential subject. The dynamic and hypnagogic soundscape is marked by a sculptural approach to audio (realized in collaboration with the sound artist Nicolas Becker); the moving image is edited to produce surprising and occasionally stroboscopic sync-points across an array of screens. The installation aims to conceptually place the viewer at the dizzying peak of the hypothetical Mount Analogue – at a vantage from which all approaches can be seen, felt and heard simultaneously.

Through an emphasis on projection-as-object and a material reality that includes canted screens, vibrating color fields, mirrored glyphs, and structural illusions, this installation will provide its viewer with a visceral and transformative experience of a world at the edge of radical dissolution. Dematerialization awaits!

Ben Russell (b. 1976) is an American artist, filmmaker and curator living in Los Angeles. Through his films and installations, he challenges conventions of documentary representation from within to produce intense, and hypnotic experiences. He examines the cinematic apparatus itself and its potential for immersion and mimetic identification – oftentimes via the very subjects and subject matter of his films: collective experience, altered states of consciousness and secular practices of ritual and trance. With over 30 works in his filmography, his approach to both feature-length and short-form work is informed by a methodology he refers to as “psychedelic ethnography.”

He worked with the phenomenological experience of noise music for his series Trypps (2005–10). He has also been involved in various curatorial projects, such as Magic Lantern (series of screenings in Providence, Rhodes Island). As a featured artist in documenta 14, he presents a new film project that examines the social and global scale of the politics of mineral extraction. It is a comparative film study about the communities of workers in an illegal, small-scale gold mine in Suriname and in a state-owned copper mine in Serbia. In addition, he has organized a four-day film and performance festival in Athens, titled HALLUCINATION(S), inviting independent filmmakers, musicians, visual artists, and film researchers to collectively unravel cinema’s hallucinatory potential.