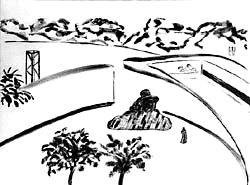 As part of our ongoing commitment to explore the many facets of French contemporary art, we have decided to devote this year’s annual show of the Frac Ile-de-France’s collection to a special monographic exhibition of the work of the artist Jean-Michel Sanejouand.
Hailing from the heart of the 60’s art scene, the work of Jean-Michel Sanejouand continues to resist any traditional type of classification, all the while maintaining a certain radicalness in its questioning of accepted forms and processes. This multiplicity of form is evident when one looks back on his diverse career, and has been well-translated by the choice of works acquired by the Frac over the years: Fauteuil et Carré de toile rouge (1966), Espace-peinture, 23 octobre 1978 (1978), Le silence (1996) et Tricuspide (2004).
Each one of the works acquired corresponds to one of the many series which make up Sanejouand’s varied œuvre: the charges-objets (assemblage works) (1963-1967), les organisations d’espace (environmental works) (1967-1974), les calligraphies d’humeur (calligraphic works on canvas) (1968-1978), les tables d’orientations (panoramic table paintings) (1974-1977), les espaces-peintures (painted and drawn works) (1978-1986), les peintures en noir et blanc (black and white paintings) (1986-1992), sculptures (sculptures) (depuis 1989), peintures (color paintings) (1992-1996), les sculptures-peintures (paintings of sculptures) (1996-2001) et les espaces critiques (paintings) (depuis 2002).
Beyond the pure expression of formal liberty, Jean-Michel Sanejouand has chosen to exploit the very ruptures which result from contrasting various artistic elements. His ingeniousness has been hailed by a number of French and international institutions, including the Centre Georges Pompidou, which presented an important retrospective of his work in 1995.
For the exhibition at le Plateau, we have asked the artist to present his selected pieces in an in situ setup which resists any sort of chronological interpretation. By viewing the work from such a perspective, the visitor will have the chance to associate it with the other artistic tendencies apparent in the Frac’s collection, including the role of the manufactured object in plastic arts, and the function of the figure in painting. Finally, the presentation of the espace critique piece entitled Tricuspide – a work composed of citations of previous works – will throw the whole idea of the “artist’s evolution” into question : an idea that never ceases to be challenged during the day to day development of a contemporary art collection.