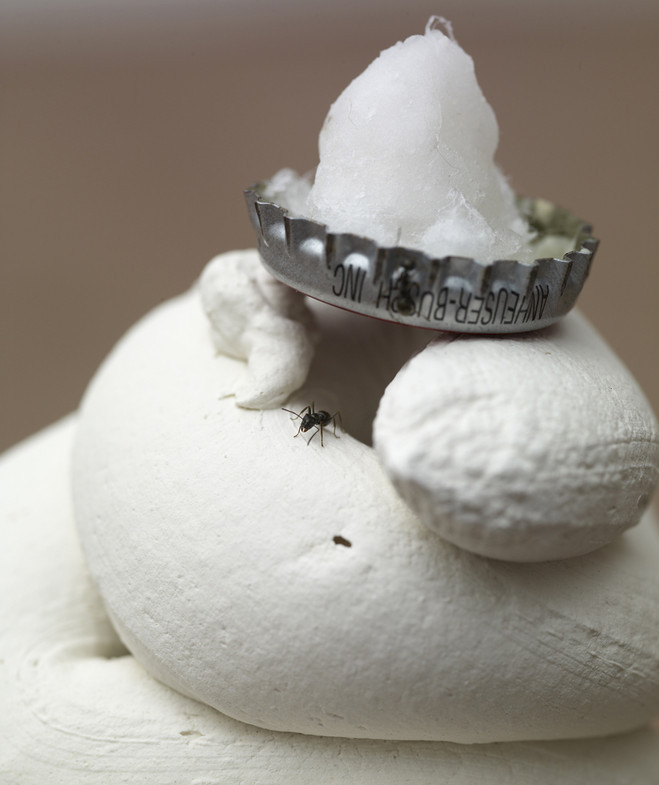 For autumn 2012, the Frac Ile-de-France/Le Plateau is holding a solo show of Michel Blazy’s work.

Michel Blazy works with modest, perishable materials, coming from everyday life, and shows us some of the strange, sumptuous and monstrous things that they can contain. The live matter which he chooses for his works carries in it the potential mutations and deteriorations which make his art an ephemeral one, or, more exactly put, an art involving continual change. Michel Blazy likes to observe things, and he also lets time do its work on matter. The playful experiments he carries out, on natural materials as much as on artificial ones, form a eulogy to decomposition, an ode to matter’s capacity to transform things, and the continual renewal of the cycle of things living . Each one of his works has a time-frame that is peculiar to it, and the notions of slowness and chance lie at the core of the process of artistic creation.

His approach is also based on the elaboration of instructions for use, no less, helping to remake the pieces he presents, thus lending them a specific status, in a renewal that is on-going, and, at the same time, paradoxically, a certain form of permanence—that ephemeral character that comes across right away corresponds with a thoroughly natural way of conceiving the development of the works...

The show at Le Plateau will present a novel overall idea, favouring one of the essential dimensions with regard to the survival and growth of every living being, and thus inherent to many of the artist’s propositions: food. Man is part of this cycle of consumption by being one of its essential cogs and his participation reflects the different organizational models of the living, linked to the sharing of space and food. In this sense, the space of Le Plateau will be turned into a gigantic restaurant designed both for the living organisms being accommodated specially for the occasion, and for visitors, who will find therein an unexpected way of being fed...

After several collaborations with the Frac Ile-de-France—the exhibition Ralentir Vite/Slowing Down Fast in 2005, an artist’s project carried out with L’Antenne in 2007, and a selection of his works now in the collection—this invitation made to Michel Blazy for a major show is a timely one, indeed, as Le Plateau celebrates its 10th anniversary.

It will also be a chance to publish a major monograph about the artist which will revisit all the work he has produced over almost twenty years.


Le Plateau : 10 years !
Le Plateau, an exhibition space launched in 2002, has become a place of reference in terms of contemporary art in France. Its artistic agenda is centered around four annual exhibitions, in the shape of either solo or group exhibitions, which enable new productions as well as the realisation of specific projects.