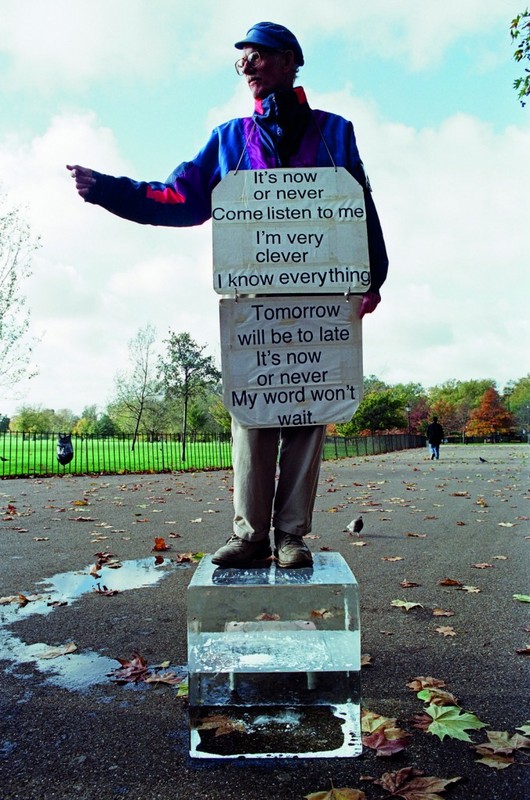 The frac île-de-france’s latest exhibition at the Château de Rentilly looks at a particular aspect of the work of the Belgian artist Michel François (b. 1956 in Saint-Trond). While François’s work is essentially sculptural, it uses a wide range of media, from drawing and installation to video and, most importantly, photography.

Epitomising this key role, each of the artist’s exhibitions since 1994 has been accompanied by the publication of a large-scale (120 x 180 cm) poster based on one of his photographs. The exhibition at the Château de Rentilly presents this ongoing series of works, which has recently entered the collection of the frac île-de-france.

The posters have previously been shown at the Centre de Création Contemporaine Olivier Debré in Tours and the Musée des Arts Contemporains, Site du Grand-Hornu (Belgium). In both instances, they had been arranged into piles on the floor, encouraging exhibition goers to take home one or more copies. At the Château de Rentilly, visitors will also be able to appropriate the artist’s work by leaving the venue with a poster in hand.

While this protocol, in a nod to Felix Gonzalez-Torres’s unlimited editions, asks questions around authorship and the status and permanence of art, François’s images/posters derive from an fundamentally sculptural approach. Beyond their materiality in the exhibition space (which can take different forms including, for instance, an all-over wallpaper), the scenes they depict appear to define themselves precisely through their reality and physical presence. The construction of these photographs echoes the artist’s sculptural practice in that it radiates a strong sense of tension, contrast and density. Similarly, their framing, at times carefully constructed and at others more intuitive, evidences a particular relationship to reality, that is, the desire to sample reality so as to reveal the plasticity of the visible world.

A frontal view of a ghost tower, young boys suspended in the air, a Hitchcockian vision of a woman in black, massive granite rocks, bodies in various liquids, holes, openings, gestures, attitudes... François’s images visualise the artist’s concerns in his approach of space and bodies, or the relationship he entertains with the world as a sculptor through and through.
www.fraciledefrance.com