Mount Fuji does not exist 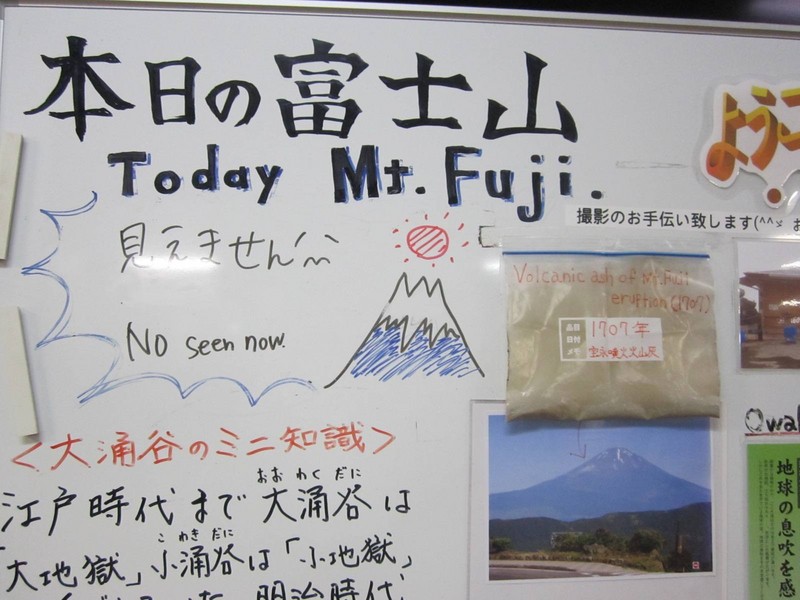 1976.
“Good work”, he said and
walked out of the door. What
work? We had never seen him
before. There was no door.
Richard Brautigan, Loading Mercury with a Pitchfork.

June 2011. Legend has it that because Mount Fuji rises up on every side at once, it is visible from anywhere in Japan. During a residency at the Villa Kujoyama in Kyoto, we tried to check this hypothesis on several occasions. We had been told that you could glimpse it through the window of the train going to Tokyo. That in clear weather, it revealed itself from the upper floors of certain high-rise buildings in the city. That if you went to the Five Lakes region, you could not miss it. That if you took such and such a train, boat, or cable car, you could be sure of discovering it in all its serene and conical majesty. And yet we saw nothing of Mount Fuji. The experience of contemplating it disappearing each time behind thick layers of mist. Replaced by the even thicker layers of its representation, drawn, photographed, sculpted. Reproduced on prints, posters and postcards, in Zen gardens, and on restaurant menus and bank notes. By replacing the experience of it, its permanent and symbolic presence confirms the legend: Mount Fuji is visible from anywhere in Japan. Everywhere and nowhere at the same time. Tantamount to saying that it does not exist.

August 1976. The Japanese group The Play made a five-day walk into the wind in the desert plane of Sarobetsu on the island of Hokkaido. The random direction of the wind determining the direction of a walk with no destination planned in advance. Wandering in the Wind.

11 April 2009. Mysterious Letters. Lenka Clayton and Michael Crowe sent to each of the 467 inhabitants of the Irish village of Cushendall a mysterious, hand-written letter, thus triggering the project to send a personal letter to all the planet’s inhabitants.

1969. During a performance titled Stone and Numeral, Giro Takamatsu undertook the task of numbering each stone along the river Tama in Japan, in an attempt to take the measure of the world.

1994. The Perfect Smile. James Lee Byars, clad in gold lamé, put on, by turns, a black hat, black gloves, and black shoes, and twisted a black silk scarf around his head. The perfect smile consisted in a tiny movement of his lips.

1992. Shimabuku went to the Mountain of Monkeys in Kyoto having learnt that the monkeys sometimes picked up a piece of glass and contemplated it, he decided to put on an exhibition there titled The Gift—for the monkeys.

January 2012. The exhibition Mount Fuji Does Not Exist is everywhere and nowhere all at once. Somewhere between a collective dynamic based on gestures eluding any need for productivity, a descent into everyday life probing the nature of existence, and the substance of things, a handwritten letter which is addressed to you, a quest for perfection, eternal and ephemeral, a poetic and discreet gift. Between these fragments and these paradoxes. Tantamount to saying that it does not exist.

Elodie Royer and Yoann Gourmel are art critics and exhibition curators. From January to June 2011, they were in residence at the Villa Kujoyama in Kyoto, In 2010, as winners of the 5th Premio Lorenzo Bonaldi per l’Arte, they produced the exhibition “The Crystal Hypothesis” and the accompanying catalogue at GAMeC, Bergamo (Italy, 2010). Together they curated amongst others, the exhibitions “25 Square Meters (per Second) or The Spirit of the Hive” as part of the festival No Soul For Sale at the Tate Modern in London (2010), “Les Feuilles/The Leaves” at Super and at the Palais de Tokyo (Module), Paris (2008), “L’anomalie d’Ararat/The Ararat Anomaly” at IrmaVepLab, Châtillon sur Marne (France, 2008), and the evolving exhibition “220 jours/220 Days” with the support of gb agency, Paris (2007/2008). Their projects are described on http://220jours.blogspot.com.
www.fraciledefrance.com