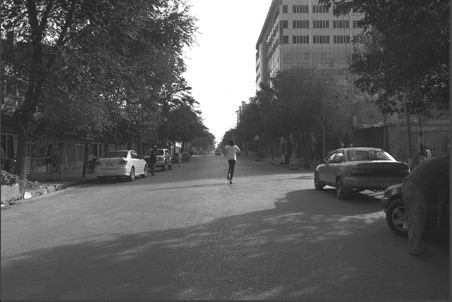 The new show at Le Plateau, Paint it Black, draws from the latest acquisitions made by the FRAC Ile-de-France, and is based on a radical decision: from the selection thus recently brought together, select only black-and-white works, and exclude all other colours.

The choice might seem arbitrary. It is--totally arbitrary. Even if it must be said that many of the recently acquired pieces objectively met this simple criterion—which, in spite of everything, has defined this angle of approach--,what is actually involved is an assertion, first and foremost, of the subjective, even artificial, nature of a proposal which in reality entails, for us, going beyond any thematic item, and seeing beyond.

Here, there is no definitive idea about the blackness of a world in crisis, no in-depth study of the different shades of grey in contemporary art, but rather a formal decision the better to favour the works in their own right, works which, over and above this slight common denominator, are being shown for what they are, in their own autonomy.
As such, Paint it Black is part and parcel of the tradition of certain exhibitions* which, in a similar way, have tried to reduce the thematic principle as much as possible, and thus avoid the works being mere illustrations of a given subject. It is also part of the logical system of an overall project consisting in stepping up playing and experimenting with the collection for shows** which have regularly adopted this principle of a main thread—no matter how disconcerting it may be—encouraging the primary vision of the work.

So we can discover, in all their splendour, the extreme viewpoints of Dove Allouche, Joachim Koester’s Surrealist interpretation of “passes”, Francesco Gennari’s demiurge-like and a tad Machiavellic vision, Margaret Salmon’s crazed capture of a couple torn asunder, and the haunting ghostly projection of Bertrand Lamarche...
At the same time, through its basic principle and its tone, Paint it Black is also a proposal in fact signifying a form of globalness. It clearly points to an atmosphere, a climate—a colour—which visitors (who will be the only people capable of bringing other colours into the show) will perforce grasp as such. And this all the more so because, far from exhaustively bringing together all the recently acquired black-and-white works, the task of devising the exhibition consisted, on the first framing thus defined, in honing a selection in order, in the end of the day, to form a thoroughly coherent composition.

In this respect, the works follow on one from the other, without ever breaking some of the systems of logic which they themselves introduce, and the circuit gets us, turn by turn, to pass through different ways of abstracting reality, through games summoning memory, and also through various cosmic visions of the world.
This black-and-white show actually forever wavers between the reading of a whole and the reading of the parts making it up, with one never taking precedence over the other, at any moment. Better still: they merge with each other, considering that the choice that each one of the artists present has made, in terms and black and white, for his or her work corresponds in reality to the choice that has been made for the exhibition in its entirety.
Another typical feature of Paint it Black is the fact that the show is staked out by scores made artists. In addition to this manner of transcription being historically made black on white—that same black and white that conceptual artists had a preference for in their quest for an ideal--, over and above this connection to music already suggested by the exhibition’s title***, the presence of these musical transpositions is also that of nothing less than protocols. Protocols—and procedures—echoing the general protocol—and procedure—which has thus given rise to Paint it BlackXavier Franceschi

* To mention just one, and a most innovative one, at that: Red, an exhibition made up solely of red works, devised by Robert Nickas in 1986.
** Such as Composition rouge, a show held in 2009 at the Domaine de Rentilly, which consisted in bringing together works from the collection based on a set of rigmaroles based on their titles.
*** Paint it Black is a Rolling Stones song from 1966.
www.fraciledefrance.com