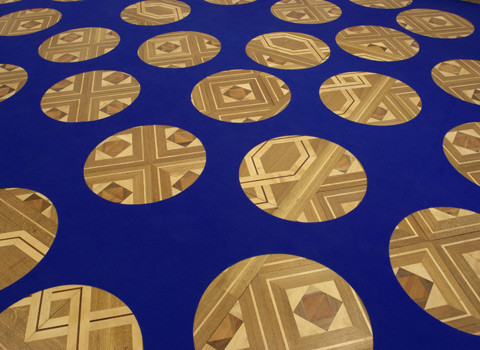 The exhibition "Sudden Impact" – which takes its name from the Clint Eastwood film of the same title - will be showcasing recent acquisitions from the Frac Ile-de-France collection, offering up a unique dialogue between the works, the visitors and the arts center.

Sudden Impact intends to provide different forms of interaction by featuring works of art that communicate directly with the visitor. Such is the case with the piece by Anthony McCall, which invites viewers to manipulate a solid beam of light in their own manner "You and I horizontal", 2005; the installation by Nathalie Elemento "S’Installer", 2006, consisting of a projected three-dimensional drawing which also serves as a radiator; and the piece by Mathieu Lehanneur "O", 2005, which is meant to slowly increase the level of oxygen in the air... A series of works that actively influence the surrounding environment, whereas the mural painting by Bruno Peinado leaves its mark through powerful explosions of color covering the walls.
Another connection is established between the works themselves, built upon a series of interactive and interdependent relationships which result from the different ensembles created by the exhibition space. Sometimes the works create such an atmosphere on their own, as is the case with Pierre Bismuth’s "Quelque-chose en moins, quelque chose en plus" 2005, which is the ideal piece for presenting works by other artists.

This mixing and combining of diverse works of art is indeed one of the major goals of the Frac Ile-de-France, whose mission is to circulate pieces from the collection in a variety of exhibition spaces throughout France.

A publication – the second in a series devoted to exhibitions of the Frac’s collection and designed by a selected artist – will accompany the exhibition. Following Florence Paradeis, the artist Xavier Veilhan will offer up his view of the collection.