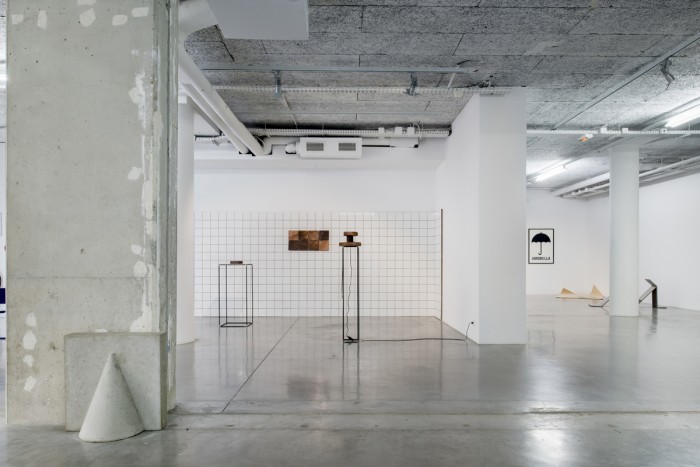 The prop master places the objects essential to the story on the set where it will unfold, but must the story necessarily be told? Props aim at making up an environment and at creating the conditions for the action, in the absence of any actor. Thus both a scene and a narration are established, based on elements placed one after another, one on top of each other, one behind the other. They are interpreted as elements of a story tinged with the way they were used (Jean-Pascal Flavien), as a linguistic syntax (Karl Larsson), or as a magic trick (Stuart Sherman). In any case, the boundaries between these categories become porous as soon as the accessories replace the actors.

The stage on which they perform (Barbara Bloom) or the effects that occur when they appear (James Welling) can also literally give them a part to play and a story to tell. The way we understand this story depends on our capacity to interpret the accessories as we would pieces of evidence or items from a collection. One could call this « l’esprit de l’étagère » (the shelf wit)– unlike l’esprit de l’escalier (the staircase wit), one does not think of a reply too late but instead finds personal qualities in objects that are physically devoid of them. Whoever is able to perceive these will recognise the portrait of their owner (Christian Boltanski) or the contradictory desires that haunt such common items (Simon Dybbroe Møller).

In short, the spiritual complement that we give objects belongs to us alone. We invest them with our intuitions and emotions, sometimes to the point where subjects and objects seem indivisible (Judith Hopf) or incomprehensible one without the other (Shelly Nadashi). On occasion, we notice that they are endowed with a kind of autonomy, with an existence of their own (Camille Blatrix), or are driven by feelings (Anouchka Oler).

Thus we are used to objects fulfilling functions other than what their original design intended – it is this observation that brought the artists of this exhibition together. They all present objects that are easily recognisable for what they are, and which also evoke a narration or feelings. The importance lies in the ‘and’, in the overlapping. This is where an entirely new relationship is built, where our emotions give objects their evocative power. These works can be seen as just so many moments in which our feelings harmonise with our environment in a way that is both irrational and unexpected.

François Aubart is an art critic and an independent curator. Some of his texts were published in reviews such as May, Flash Art, Art Press, Art 21, 2.0.1, 02, 04. Recently he organised the exhibitions L’appropriationniste (Contre et avec) and Joe Scanlan, Classism at Villa du Parc (Annemasse), L’écho des précédents at Cneai (Chatou), On ne connaît les chiffres que d’un côté du plan in Art3 (Valence), An Ever Changing Meaning at the Walter Phillips Gallery (Banff) and Profonde surface at Shanaynay (Paris). He teaches at the art school of Lyon and is the co-founder of the review ∆⅄⚙ and of the editorial project <o> future <o>.
www.fraciledefrance.com