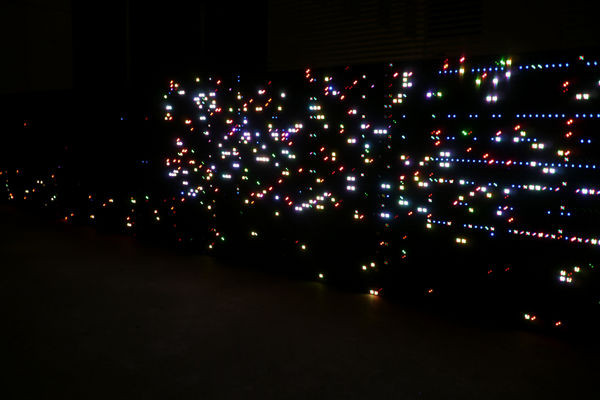 Starting point for the installation 'Photonuclear' at Lichthaus Arnsberg is Henze's technological Objet trouvé 'Cerenkovs Dream': an LED Wall that autonomously produces discharges that could be identified as traces in a particle detector. The Russian physicist and Nobel prize winner Pawel Cerenkov could have conceived such a device for registering the radiation he discovered, and which is used for detecting particle collisions since then.

For his installation Henze used this LED wall to create photograms of these discharges, adopting a scientific attitude for creating his images. Science, too, works with photographic proofs, and tries to acquire the most immediate imprints of its subjects of investigation. Researchers create technical image generation processes that try to eliminate the researchers hand from this image production, in order to create a neutral, unaffected proof.

Yet, these technical images are subject to aesthetical decisions of the experimenter to a far greater extent than is usually acknowledged. Especially when these images are created to proof something that is inaccessible to natural human perception, they are designed towards the desired assertion of the concepts. In order to create a visual proof, science seeks to sensualize the inaccessible, and hence proceeds onto the 'precarious' terrain of the aesthetic.

The image generation process that the artist employed for creating the exhibited fotograms is only conceptually scientific, but de facto it is absurd. It tries to deliver proof for something that is of an imaginated origin, that resides in a realm beyond scientific ratio and deduction.

Yet, this operation poses the image itself into the center of our investigation and constitutes the sample as the actual result. We try to decode the traces of the production process with scientific means in order to understand their creation and their origin. The images of a technical nature carry only concealed traces of the hand that created them.
www.lichthaus-arnsberg.de