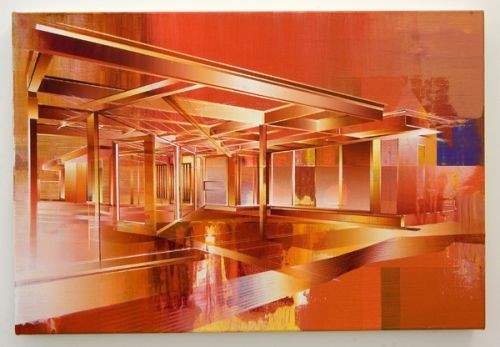 What happens, if elements from architecture are transferred to the two-dimensional world of a painting? This question is explored by Martin Kobe in his paintings in a very special way: he perceives primarily modern architecture, whose characteristic elements are fragmented and rearranged to new, visionary space modules. These painted constructions, which resemble virtually animated ground plans and suggest three-dimensionality, fascinate and irritate the observer when having a closer look; traditional observing habits are questioned in their basis. The supposed spatiality uncovers as an illusion and artistic fiction. Martin Kobe. The centre cannot hold: The about 20 paintings of this artist are contrasted with works from the holdings of the Galerie Neue Meister and the Kupferstich-Kabinett of the Staatliche Kunstsammlungen Dresden, which illustrate different conceptional and artistical strategies for the presentation and interpretation of architecture in the field of fine arts. Among these are the „Carceri“ by Giovanni Battista Piranesi, works by Hermann Glöckner and Edmund Kesting as well as samples of travel photography from the 19th century. Exciting correlations do also arise from the contrast to abstract paintings from the 20th century.
Martin Kobe, born in 1973 in Dresden, studied from 1995 to 2000 in Leipzig and afterwards became disciple of professor Arno Rink. In 2002, together with 10 more graduates from the Hochschule für Graphik und Buchkunst, among them Tim Eitel, Matthias Weischer and David Schnell, he founded the gallery of producers LIGA, which successfully helped the young Leipzig artists to establish on the interntional art market.