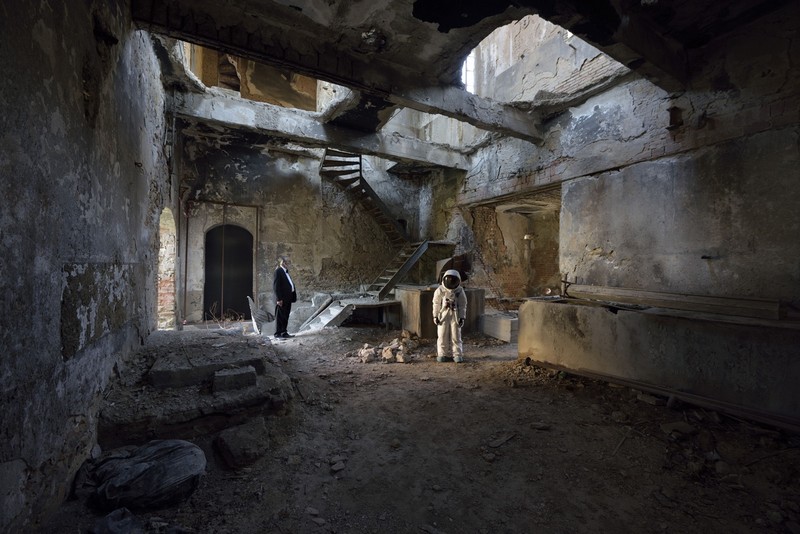 “I’m a born bricoleur. I love the way that things that are otherwise discrete and self-contained start to suggest things once they are forced into a dialogue with something else.”-- John Akomfrah

Lisson gallery is proud to present John Akomfrah’s first exhibition with the gallery, showing new and recent works by this internationally acclaimed artist and filmmaker. Akomfrah’s work is characterised by a rich, multi-layered visual style that is as poetic as it is political and which frequently fuses contemporary issues with history, fiction and mythology. Collaging archival film footage, still photography and newsreel with new material, he investigates personal and collective memories, post-colonialism, temporality and aesthetics in works that frequently explore the experience of the African diaspora in Europe and the US.

Akomfrah first came to attention in the early 1980s as a founding member of the influential Black Audio Film Collective alongside the artists David Lawson and Lina Gopaul, with whom he still collaborates today. Their film Handsworth Songs (1986), which marks its thirtieth anniversary next year, explored the 1985 riots in Birmingham and London through a charged combination of archival material, that won international prizes and attracted a huge audience when shown at Tate Modern in the wake of the 2011 riots. Similarly, The Unfinished Conversation (2012) combines found and newly shot footage to create a kaleidoscopic biopic of the cultural theorist Professor Stuart Hall’s life and work — a piece that is simultaneously projected onto three screens and has been described by the critic Jennifer Higgie as being “as sensitive to the nuances of music, collage, atmosphere and biography as it is to the brute facts of politics”. Other works such as Mnemosyne (2010), Peripeteia (2012) and Vertigo Sea (2015) borrow their premises from literature, mythology and art history, adopting fictional, even oneiric registers to create meditations on memory, African diaspora and global migration.

For his debut at Lisson, Akomfrah is presenting three new film installations, alongside a series of large scale photographs related to the works. The first work, The Airport (2016), is a three screen film installation which recalls the work of two filmmaking greats: Stanley Kubrick (1928-1999) and Theo Angelopolous (1935-2012). The film’s narrative, complete with sweeping shots of the landscapes of Athens and Southern Greece, contemplates the significance of empire, and the ghosts which linger in our collective consciousness – both physically through architectural ruins and metaphorically through the traces and personal histories of previous generations. The film’s elastic sense of time, where characters from different eras and generations encounter one another references Stanley Kubrick’s masterpiece 2001: A Space Odyssey (1968). Angelopolous’s technique of employing constant movement between camera, characters and locations is also reflected to poetic affect.

The second work Auto Da Fé (2016), which translates as Acts Of Faith, is a diptych that looks at migration through the lens of religious persecution. Presented as a poetic period drama, the film presents a series of eight historical migrations over the last 400 years, starting with the little known 1654 fleeing of Sephardic Jews from Catholic Brazil to Barbados. As the film develops, we are presented with tale after tale of populations being displaced along religious lines, right up to the present day migrations from Hombori, Mali and Mosul, Iraq. Religion, persecution and migration are, it seems, old and continuing bedfellows. The work was filmed on location in Barbados, but the landscape is deliberately anonymous, reflecting the universal nature of these stories.

The third and final film Tropikos (2016), transforms the landscape of the Tamar Valley in the South West of England into a sixteenth-century port of exploration on the African continent in order to reveal the deep-rooted and darker history of the river and the UK’s role in the development and proliferation of the slave trade.

Tropikos is a 70th Anniversary Commission for the Arts Council Collection, Southbank Centre London, with the River Tamar Project and Smoking Dogs Films.

The Lisson Gallery exhibition will coincide with the first UK showing of Akomfrah’s three-screen video installation Vertigo Sea at the Arnolfini in Bristol (16 January – 10 April 2016), following its premiere as part of Okwui Enwezor’s exhibition ‘All the World’s Futures’ at the Venice Biennale in May 2015. Together with Trevor Mathison, Akomfrah has been commissioned to create All That Is Solid (2015) for the British Art Show 8 (at Leeds Art Gallery until 10 January 2016, then touring to Edinburgh, Norwich and Southampton). Akomfrah has also been nominated for the prestigious Artes Mundi, the UK’s largest art prize, the winner of which will be announced in January 2017.
www.lissongallery.com