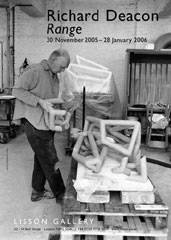 Richard Deacon has been a leading figure in British sculpture since the 1980s. His consistently innovative use of form and his interest in materials and their manipulation make him one of the most inventive artists of our time. Throughout his career, Deacon has worked with a diverse range of materials including laminated wood, polycarbonate, leather cloth, stainless steel and most recently clay. His constructions are often of unexpected scale, ranging from the domestic to the monumental. Following his recent solo show at Tate St Ives, this exhibition entitled Range is a body of new work incorporating earthenware, photographs and stainless steel. The title draws on the multiplicities of practice within a given form as well as the diversity of media, materials, surface effects and scale employed. The title also finds literal expression in five ink drawings that are collaged into photographs of the American prairie and of mountain ranges. The eponymous Range A - G, 2005 series continues his recent exploration of clay as a sculptural material. These works exemplify the process of soft/solid carving in which form is created by cutting away and hollowing out, continuing his longstanding investigation of the boundaries between interior and exterior. Placed on unglazed plinths, the pieces evoke the creative process of their making by opposing the highly finished, lean geometry of the structures with the earthly solidity of their bases. Covered with a rich glaze both reflective and transparent, the surface plays with the sensual experience of sculpture as both tactile and visual. House Version, 2005, a large stainless steel piece, raises the issue of scale within the gallery space. The title functions as an idiosyncratic presence that both acknowledges and extends the metaphorical implications of the work. House Version is made of prefabricated stainless steel tubes of varying length, the domed ends of which interconnect to form molecule-like clusters at the vertices. The steel is sanded in complex swirls, producing a lush, fluid and constantly changing surface. In contrast, the surface of Vincent, 2005, a large, strongly geometric ceramic piece, creates a leathery effect like a well-worn shoe. The two hand-built ceramic works Ribbon Bow, 2004 are made from cut up thrown pottery elements that are reassembled to create undulating forms. Placed directly on the wooden gallery floor, the weaving in and out of their sides makes a play of inside and outside that, on a smaller scale, parallels the interplay of spaces in House Version.
www.lissongallery.com