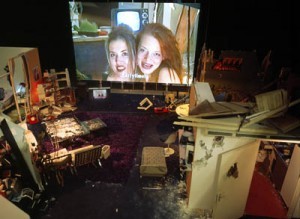 Starring actor Guy Richard Smit and featuring digital animation by PanOptic, Christoph Draeger and Reynold Reynold have made a fictionalised newscast depicting a live broadcast of the end of the world. Posing as “Guy Smith,” anchorman for MSNBC’s (also fictionalised) “24 Hour Disaster and Survival Network”, the actor reports a sequence of events beginning with the bombing of Big Ben. The situation gets progressively worse: Terrorists destroy the Chrysler building, aliens vaporise the White House, and Paris is struck by a nuclear bomb. Between sequences of destruction, the reporter interviews various people: Dr. Immerworst of Harvard explains that there is no reason behind the terrorists’ actions, simply that they are “evil” and should be killed. Then Charity Wellgood, pet psychologist, offers tips on how to counsel pets and children after disasters. As the action rises, the discussions give way to footages of carnage and ruin, including one shot of the damaged World Trade Center (as depicted in the movie Armaggeddon). Smith’s commentary throughout, although growing more panicked with each event, reflects first the horror, then the desire for revenge, and lastly, on whether anyone is even watching his broadcast. Begging for the viewers to call the station hotline and register their comments on air, no one does, and he is terrified. Finally the broadcast becomes fuzzy and snaps to a black screen.
A commentary not only on the zeal for revenge felt by many after the attacks, but also on the often absurd manner in which the media portrayed the events, “The Last News” is a poignant and very contemporary piece about the transmission and reception of information. As more outlets of media are controlled by a small handful of corporate giants, the pursuit of profits and ratings always leads to a dangerous sensationalism, and Draeger/Reynolds parodies this to its extreme.
www.lokal30.pl