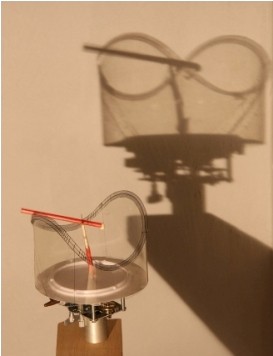 After seven years in its little venue in the PIW tenement, Foksal Street in Warsaw, lokal_30 settles now as a guest in a new space in Wilcza Street – as lokal_transfer. The name addresses the gallery’s nomadic spirit, which informed, among others, our London branch operating in 2009 and 2010. In turn, the title of the exhibition refers to the first group show at lokal_30 in 2005 “Opening. Beginning”.
Gathering works by artistic collaborators and friends of the gallery, “New Opening. New Beginning” revolves around the act of transfer. The exhibition is opened by the metaphor of incessant change and ‘new beginnings’ – the first work produced in Poland by Hungarian Attila Csörgő. Also on display is the latest video by Józef Robakowski (oratory for Katarzyna Kobro), photographs by Natalia LL from the cycle ‘Animal Art’, Zuzanna Janin’s candyfloss sculpture, early works by Alicja Żebrowska and Tomasz Kozak. Apart from site specific projects by Franciszek Orłowski, Jan Mioduszewski and Jaśmina Wójcik, the show features also a disturbing painting by Ewa Juszkiewicz, and abstraction-oriented works by Filip Berendt, Mateusz Szczypiński and Karolina Zdunek. To mark the long-term heavy focus of lokal_30 on cooperation with artists from Central and Eastern Europe, apart from Attila Csörgő the show includes Stefan Constantinescu with his amazing book-form visual report of a childhood in Bucharest, and Kamen Stoyanov from Bulgaria, who works with peculiar relations between geopolitics and aesthetics. Also on display, works by two Russian artists Katya Shadkowska and Alexandra Galkina are an attempt to gauge the potential of contemporary artistic practices as effective resistance forms.