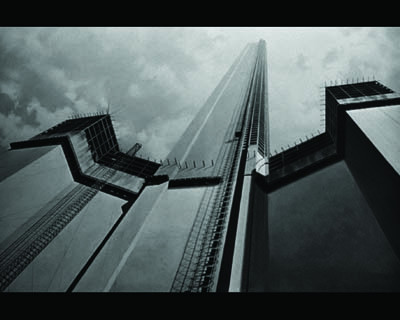 Following the invitation to present its recent work at Lokal 30 gallery, Société Réaliste has devised “Komfortkampf”, an exhibition constructed as a dialogue between two long-feature films of the Paris-based cooperative: “The Fountainhead” (2010) and “A life to see” (2012). The two films address crossed topics between promethean myths and ideological belligerence in the field of art, a certain canonical approach to the aesthetization of politics.
Ayn Rand (1905−1982), Russian-born American novelist, made a film adaptation of her second novel “The Fountainhead” in 1949. The studio movie was directed by King Vidor and featured Gary Cooper and Patricia Neal in the main roles. The movie tells the story of Howard Roark, an individualistic modernist architect − a character based on the figure of Frank Lloyd Wright − fighting against a surrounding collective decadence in the name of his personal genius. This original movie is a propagandist response to the Nazi and Soviet films of the pre-war period. At the centre of the script emerges the city of New York, seen as the idealized incarnation of capitalism. Few years later Rand synthesized her zealous embracement of the capitalist ideology in her “objectivist” theory, a willingly globalizing and militant concept followed by numerous admirers such as Ronald Reagan and Alan Greenspan. With the aim of deleting the plot of the original version Société Réaliste has removed the sound and every human presence from their version of “The Fountainhead” to reduce the film to its decorum, its ideological architecture. It’s all about the atmosphere of the film, the fantasized portrait of the city of New York, the visual discourse on the architecture of a closed world, the glass tower of the titans of capitalism.
“A life to see” (http://alifetosee.net) is a 885,768 hours-long online film based on the film production of Nazi director Leni Riefenstahl. Throughout her career, Riefenstahl has shot and edited 10 hours 01 minute 19 seconds and 10 frames of motion picture. She lived for 101 years and 17 days. “A life to see” is a film composed of the 901,985 frames authored by Riefenstahl, edited in order to last the same time as her life, 885,768 hours. The frames are projected randomly and each of them appears only once, for a duration of 59 minutes. The complete 601 minutes soundtrack of Riefenstahl’s filmography is edited in its chronological order and accelerated to an overall duration of 59 minutes, repeated over each frame. The projection of the film began on Friday, 17 February 2012 and will finish on Tuesday, 7 March 2113.
The two films are related one to the other with a series of graphic works extracted from Société Réaliste’s corpus of work.
Futura Fraktur (2010) is a hybrid of two typefaces banned under the Third Reich. Futura is the archetypal modernist typography, invented by Paul Renner in 1927 using visual elements introduced by the Bauhaus, hence their ban by the Nazis. Fraktur is the Gothic-style typeform used in German-speaking countries between the XVIth and XXth centuries. Considered authentically Germanic, Fraktur was the preferred typeform of the Nazis until 1941, when it was officially banned by Martin Bormann, under suspicions of Jewishness because of its origins and links with the Schwabacher typeface.
www.lokal30.pl