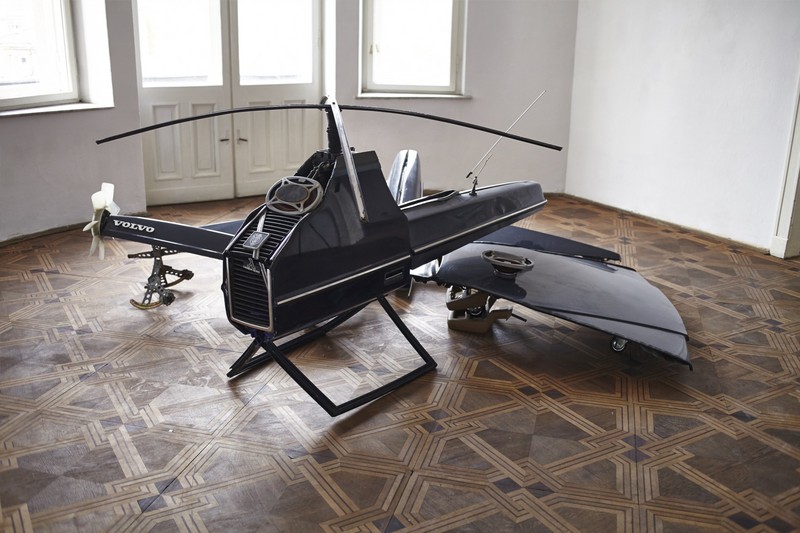 Already since the beginning of her artistic practice in the early 1990s, Zuzanna Janin has used the elements of her own biography in her works and located them within a broader context, thus giving her personal experience a universal dimension. The artist launched her activity with Covers (1992). Those airy forms, woven of white parachute silk marked her attempt to describe the immediate surroundings and to protect remote memories and the memory of the experiences of specific spaces and objects of daily use. The play between the inner and the outer, and the combination of material covering and symbolic protection – these are the essential threads in Zuzanna Janin’s practice.

The initial investigations led the artist from places and objects that she covered with cloth or wrapped in wire netting to the discovery of the body as the “human cover”. Janin turned to the exploration of her own identity through the search of the border between the self and the non-self. “How much of myself is there in others – in my grandmother, mother, daughter?”, as the artist seemed to ask in a cycle of overlapping laminated photographs of bellies, legs, hands and feet of her female relatives. The dialectics of the inside and the outside, the skin and the skeleton, the lasting and the ephemeral returned in her sculptures made of brass rods, which outlined the shape of the body. The artist covered the brass skeletons with candy floss, whose structure changed in the course of time, highlighting the dialectical character of the body.

Zuzanna Janin’s first individual show at lokal_30 features her most recent works, which have been created specifically for this exhibition but come as a result of her previous choices and reflection. Those investigations have brought her to create an exhibition related to the transgression of clichés as well as moral, intellectual and social habits, based on the elements of her own biography – partly discovered and partly invented. The robust family car Volvo 240 has been transformed into a group of drones shaped in surprising ways. In the works House as an Optical Device and Dance as a Mapping Device (2014), the artist’s house becomes a sort of map of the everyday, but also a kind of an optical device, in which reality glitters, wanders about or lasts depending on the dynamics of movement. Zuzanna Janin invites us to dance around her space and to investigate it with her steps to the music. “Culture” represented by the house smoothly transforms into “nature” represented by the garden, where tree trunks and their invisible roots are photographed and catalogued, which gives them the status of objects, elements of the mapped territory. It is also an insider presentation of the daily experience of modernist architecture.

On the exhibition we present also a premier show of the installation Meeting Halway Warszawa-Sofia, realized in collaboration with Bulgarian artist Kamen Stoyanov. Artists met in the halfway point from Warsaw to Sophia, on the field in Romania (47° 33’ N & 22° 19′ E), where they sat at the table contracted from two halfs brought from their hometowns by the artists and tryed to understand each other talking in they own languages: Janin in Polish and Stoyanov in Bulgarian.

The focal point of the exhibition are Janin’s new sculptures – figure of a dancing girl, which refers to the artist’s childhood – Dancer (2014), drones travelling through the contemporary time and space (VOLVO240 Transformed into 4 Drones, 2014), and Seven Fathers (2014). The eponymous work refers to the artist’s investigations manifest already in her previous projects – above all in Follow Me, Change Me, It’s Time (1995-97) and in In-between (2005-2008). Janin breaks the stereotypical father figure representing authority, power, infallibility and the traditional perception of the relation between the daughter and the father. Janin contrasts the conservative figure with the image of an ordinary man, who marches through life with a burden of weaknesses, and who, regardless of his triviality or extraordinary character, enters into relations with his surroundings, leaving a trace of himself among the people who are the closest to him. Subjecting to vivisection all her relations in which the social, cultural or family role of the “father” has been present, the artist writes letters to men who played that role in her life. As a defiant daughter, Janin breaks the father figure into seven small figurines and locates them on the pieces of the trunk of an old oak felled by a gale. She deconstructs, or actually breaks the traditionally understood fatherhood, revaluates it and turns the fragments of her biography into an important and universal statement on one of the crucial crises of the contemporary times.
www.lokal30.pl