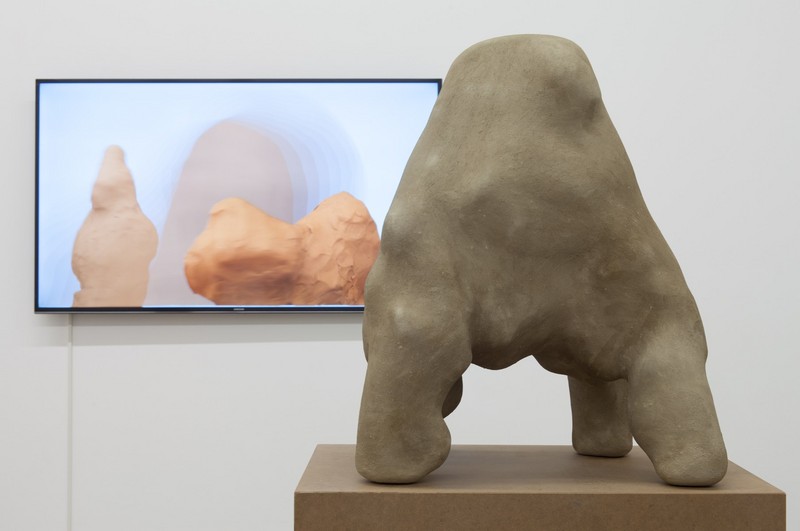 We are very pleased to present the solo show Why We Build with new works by Takehito Koganezawa.

With Konganezawa, drawing and video are always linked and mutually interdependent – they are the instruments of his methods of visualizing the „Ma“. „I want to see nothingness, really nothingness”, and as he once explained in an interview with Hans-Ulrich Obrist, in order to see the hole in the donut, you first have to draw the donut.

On the occasion of the Gallery Weekend 2016 Loock Gallery is showing the interdisciplinary and multiple-piece video installations Why We Build and Other Person’s Shoe – in which he analyze the media representation of the IS, as well as the video Setting the Butterfly Free. Selected works on paper are to be seen complementarily.

„[...] In his recent work Why We Build (2016), Koganezawa sets classical art objects into motion. A video projection displays three levels lying one behind the other in which simple sculptures emerge and successively begin to rotate. If up to now, we have thought of sculptures as being static, maybe monumental, Koganezawa here shatters our illusions. His “sculptures” appear as nondescript objects of clay that first of all attract our attention through their circular movements. [...] In these works, what is at stake is the definition of “sculpture” itself and the connotations of abstract forms, that change their meaning and dissolve when they are set into motion.

The artist extends [...] this video with his room-installation Other Person’s Shoe (2015). It is a combination of projection and diorama, in which Koganezawa casts an eye upon the international hostage-takings and executions by the IS, and so for the first time reflects upon a highly explosive political subject. [...]

In the three-part video work Setting the Butterfly Free (2015), this link between drawing, body-art, and video-art evolves into a poetic experience, when he calls to life the pages of a notebook soaked with colored dots by turning it into a flip-book. Here Koganezawa’s special ambition and capability becomes apparent: It’s his delight in discovering the mystery and humor present in everyday objects and situations. By setting his artistic material in motion, he addresses both the physical and temporal aspect at the same time, and in this way captures our attention.“
– Quote: Dr. Andrea Jahn, Director of Stadtgalerie Saarbrücken (2016)