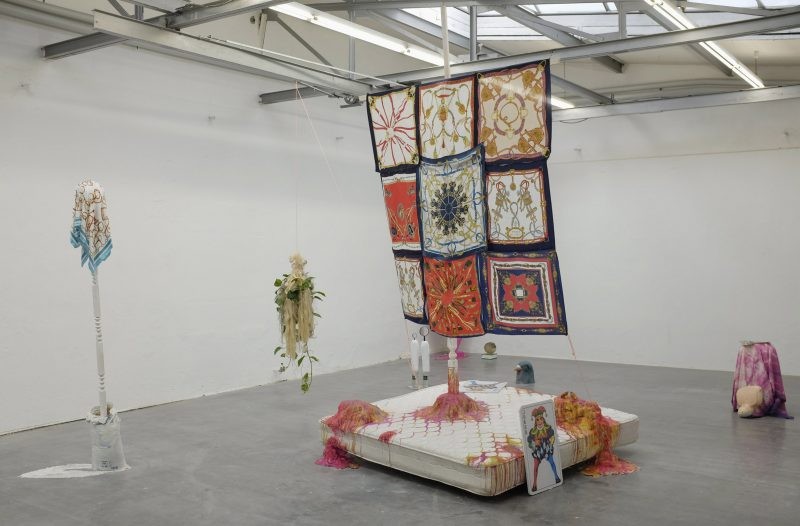 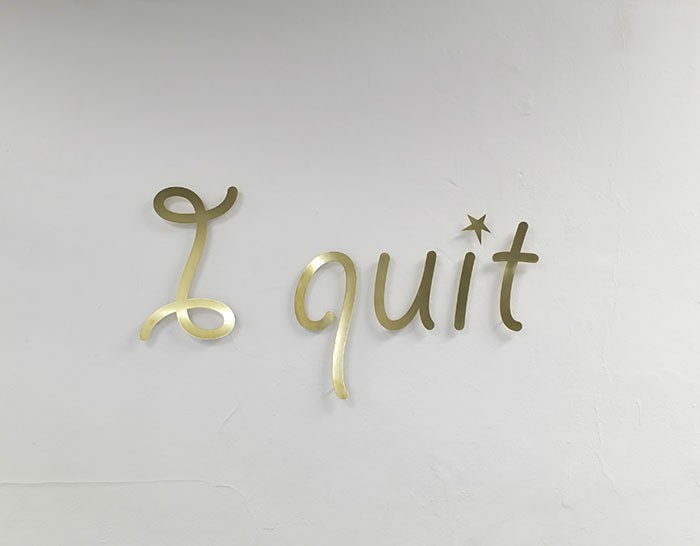 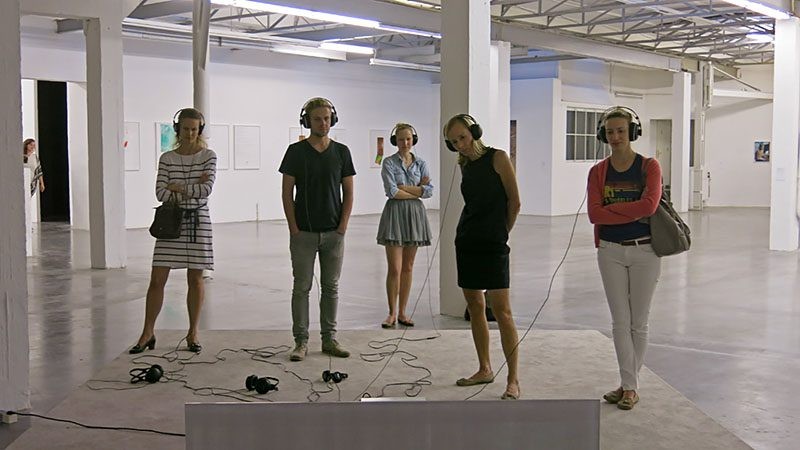 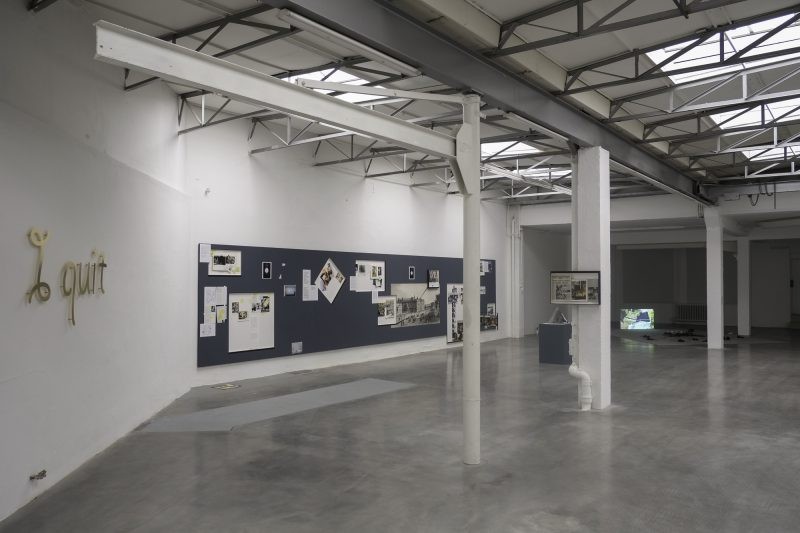 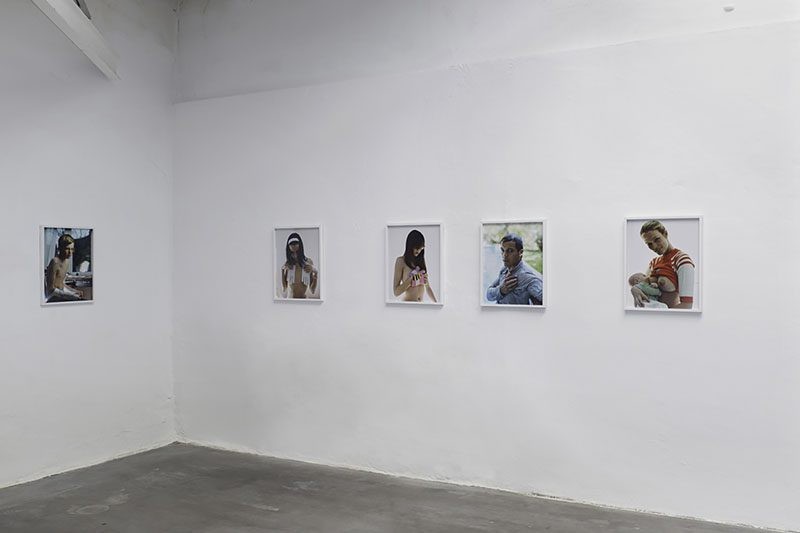 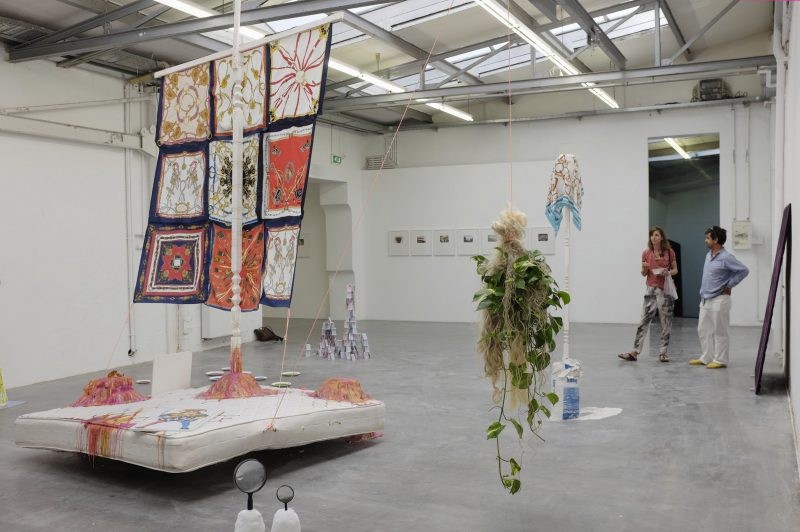 ‘The Elephant Test’ is the first exhibition to open under the new direction of Dana Weschke and Jörg Koopmann at the Lothringer13 Halle. Seven artists, working through different media and contexts, broach social issues, while exploring the possibility of a productive uncertainty. The term ‘The Elephant Test’ describes things or ideas, which, by definition, lack any clear meaning or classification, while at the same time being easily recognizable as a concept. Originating in a judicial context, the term points to the existence of specific grey areas, even in the well-structured legislation system, which have to be accepted, including, or because of, their blurring boundaries.
The exhibition shows artistic approaches moving between an internal and external perceptual world. In a web of individual deliberations and impartial references, social processes are played through, questioned, carved out, and examined – without expectation of conclusion.

In her video installation, ‘Sitting, Sleeping, Feeding’, artist Rachel Rose follows the endeavours of life-extending procedures on humans and animals. Rose’s work is shot in a cryogenics laboratory, a robotics perception lab, and at different zoos across America. In a spinning structure, the New York-based artist edits sound, image, and text, into an intense, multi-layered video-essay. Basim Magdy shares the same narrative approach, at the threshold of documentary and the fantastic, building a surreal view of a fictional societal structure. The correlation between text and image courses wavelike, from inter-leaved to detached, while both the beginning and the end of a society, oscillating between hubris and decline, remain open.
Scandinavian artists, Jonas Liveröd and Pind, are commissioned with new, site-specific works. Liveröd typically works with a wide range of materials and objects, building subtle bridges between legends and predictions. The planned undertaking with the running title ‘Flotsam & Jetsam’ revolves around the desperate condition of “post-comfort”, as Liveröd puts it. In contrast, Pind dedicates his exertion to the reality, or non-reality, between artwork and human experience in the world; the value of the representation blurs into the apparently objective external world; the border between truth and notion annihilated.
Mathew Hale presents, in his large-sized assemblage ‘Maria und Josef’, a compilation of his own notes, drawings, cutouts; and material from newspapers, posters, books and magazines. Issues with great media impact, such as the troika of Lady Diana, Prince Charles, and Camilla Parker-Bowles; or the London Riots, get either linked or abstracted through an unconscious, associative chain. Lisa Holzer connects purposeful references on a text and image level, whose hierarchy dissolves through partly humorous, self-deprecating titles. In her ‘Passing Under’ series, Holzer refers to a quote by psychoanalyst Jacques Lacan, whose diversity of meaning evolves in the context of literature, pop culture, and consumerism.
Norwegian, L.A. based photographer Torbjørn Rødland creates images, whose on-the-surface attraction is quickly undercut by mostly irritating details. Focus is on humans and their actions, getting staged and shifted as a model between individual and iconic representation. Rødland’s narratives happen both inside a single motif, and, in his comprehensive series, inside books. A subtle concerted rhythm outs through analogies, breaks, poetics, and provocation. An explicit authorship, challenging, feeding, unhinging – while still leaving enough space, never becoming too instructive.

Not least this quality led us to our composition of the seven invited artists: a perceptible attraction enables us to dive into their intellectual world and in whose rich, cosmic humour, the subtle and the obvious are allowed to entangle.