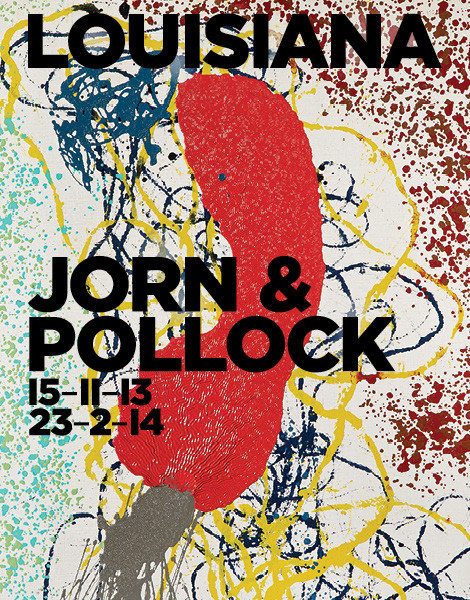 Did Danish Asger Jorn (1914-1973) and American Jackson Pollock (1912-1956) share artistic means and ends? For decades the question has remained unresolved, and now Louisiana is taking a closer look at the work of the two outstanding artists with the exhibition Revolutionary Roads. A selection of 135 works – paintings, drawings and prints – offers a specific take on this meeting of the giants for the first time.

Jorn and Pollock are two important artists who never met, but each in his own way revolutionized painting during and immediately after World War II. They were the same age, one a northern European born in Vejrum, Jutland, the other an American from Cody, Wyoming, in the USA. The war severed the connections of both with the Parisian centre of the Avant-garde, which was never re-established. This exhibition focuses on the period 1943-1963. For both artists there was a ‘before’ this period, and for Jorn also an ‘after’. It was in this period that the two artists’ work was defined and they achieved the greatest international attention – and it was in these same years that a new, spontaneous-abstract painting style arose.

At times one may doubt which of the two created what: Some of Jorn’s and Pollock’s works are almost indistinguishable in style. But the exhibition is not about the two artists being identical – quite the contrary. Jorn and Pollock offer us different versions of the routes that the revolution in painting could take, and often what looks identical is really fundamentally different.
The intention of the exhibition is to establish a direct encounter with the works in all their insistent materiality, with their methods and idioms, in an attempt to emancipate both artists a little from art history’s categorizations into the ‘action painter’ Pollock and the ‘CoBrA painter’ Jorn. They shared in the creation of a new abstract expressionism, but related differently to the roles of art and the artist in society.

With his drip technique Pollock changed the rules of the game for painting itself for many people. He staged the artist as the modern hero; he was in the painting, but outside society. Jorn went a different way. For Jorn it was about commitment to the real world, about getting history and the contemporary world into art and a residue of the figurative in his works, a recognizability to which we can relate as viewers.

Jorn is a central figure in Louisiana’s collection and has been presented retrospectively several times, but it is half a century since Pollock’s paintings were last presented at the museum (in 1963). This exhibition shows 135 works, paintings, drawings and prints lent by some of the world’s leading museums and private collections.

The meeting between the works of the two artists has been organized in five thematic sequences, each with its own expression – routes that constantly cross paths: Myths and Mythmakers, Figuration and Abstraction, Abstract Expressionism and What Looks Like It, The Accidental and The Controlled and Jorn & Pollock. Revolutionary Roads.
www.louisiana.dk