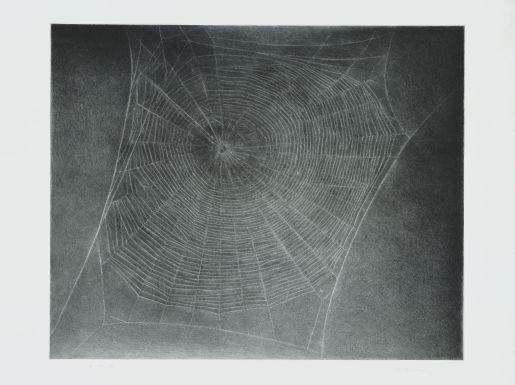 A richness of detail is found in Vija Celmins drawings - a fantastic handicraft, which leaves us wondering how the drawings were made. Her art works are an invitation to see being concentrated on the absolute essential in technique as well as in her choice of motives.

Work on paper can be a core area for an artist and this is precisely the case with Vija Celmins. In an extremely realistic technique the artist reorganizes and imitates black-and-white photographs, usually executed in grisaille, grey shades, which form patterns of light and shade. Her magical gaze from the small sheet of paper out into the starry oceans of the universe expresses what the intimate format can contain: everything from the smallest to the greatest. The subjects make up a small handful – spiders, webs, sea and sky, with an incessant preoccupation with the question of how one gets from the photographic image to the painting. What happens to the image when it is moved from one medium to the other?

The artist’s early youth in Riga in Latvia was typified by terror and horror, and in 1944 the family fled to Germany. Later, in 1948, the family went on to the USA, where Celmins has worked as an artist since the 1960s, at first in Los Angeles, where she met among others the artists James Turell and Doug Wheeler, from whom she draws much inspiration for her special subjects; and later in New York. In 2014 a major retrospective of the artist’s works is to be shown at the San Francisco Museum of Modern Art (SFMOMA).

The exhibition is organized in collaboration with Museum Ludwig, Cologne and is showing works spanning the period from 1970 until today. Vija Celmins’ delicate art is represented in Louisiana’s collection by a number of prints.