Flashes of the Future

The Art of the ’68ers or The Power of the Powerless 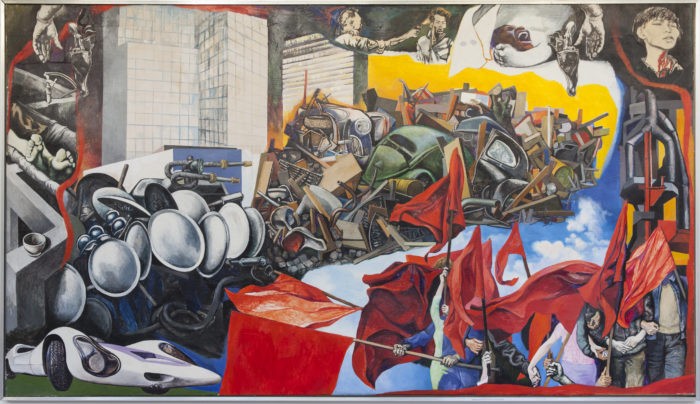 1968 – No other year in the 20th century is given such a symbolic and iconic status, no other year is studded with myths, evokes associations, viewed with bias, and kindles emotions. A year in which protests, upheavals, and even revolutions took place in numerous countries around the globe: May 1968 stands for international youth and protest cultures in 56 countries, 22 European ones amongst them, but also for an art breaking out of its elitist ivory tower – parallel to this, masses of individuals in the Western world begin to strive for autonomy. It is first through the interaction between students, intellectuals, and artists that a cultural revolution capable of disrupting the authoritarian structures of societies in both East and West could take place. Above all, artists, declaring the artwork to be obsolete while in part working massively against the art market and a commercially utilizable commodity ‘art’, contributed significantly to the desires and the imaginative visions of the student movement finding expression in provocative and pithy signs and images and exerting power over reality (“all power to the imagination!”).

From the distance of half a century, 2018 is the perfect opportunity to take a comprehensive and transdisciplinary look at this key year of the twentieth century (and its place as the midpoint of a decade). The exhibition will show and analyze for the first time the ideas, actions, myths, and self-interpretations of this generation by concurrently looking at them through the mirror of artistic productions and practices. Ultimately, the aim is to provide a new and critical perspective on the years around 1968.

The International Newspaper Museum Aachen as cooperation partner, will fulfill the ambitions of the exhibition and publication project with a special contribution – a satellite exhibition focusing on the role of the media. Of particular interest here is the influence exerted by the Hamburg-based publishing house Springer on public opinion in the 1960s and how this influence was generated and used.

In conjunction with the exhibition, a comprehensive publication will appear in the “Zeitbilder” series of the Federal Agency for Civic Education (eds. Andreas Beitin and Eckhart Gillen).