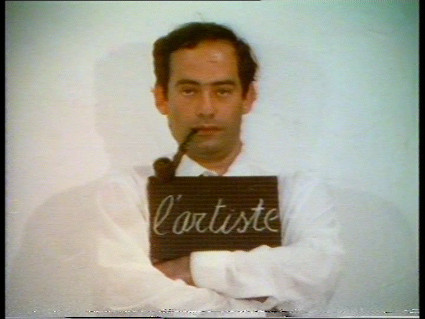 Works by Ellen Gronemeyer and examples of “Modern Icons” from the Ludwig Collection: the Ludwig Forum Aachen is focusing on painting this spring. And even the curators of the Video Archive have dug up something interesting. Under the title “Painting Electronical Images” they are showing videos from the collection which enter into dialogue with painting.

Ever since their invention artists have used the audiovisual mediums of film and video to confront and challenge the premises and practices of traditional painting. The development of the genre is thus decisively influenced by reformulations of pictorial strategies and conventional aesthetic rules. But the converse is also true: while works of electronic pictorial art always seek to link into the field of painting steeped in tradition, painters have adopted the modes of expression and impact generated by the new media into their works. And as video advances to an artistic medium in the 1960s and 1970s, many painters, sculptors, concept and performance artists experiment with the new possibilities.

The exhibition “Painting Electronical Images” features positions taken during the first decade of video art which explore the interrelationship between the mediums: these videos are either made like painted pictures and grapple with formal-compositional elements, or they have pictures as their theme and take a critical look at – often as caricature – art history. They quote famous works and query the traditional notions of the pictorial and indeed, what constitutes art.

Artists like Hakudo Kobayashi and Franz Buchholz employ the imaging procedures of video to generate pictorial abstractions. Instead of with brush and paint, they create electronic images on the screen which, now displaced into the dimension of time, continually join together into new forms.

Nan Hoover spoke of photography, video, and lights as “different brushes” for her work. Hoover, who first worked for 20 years as a painter, uses a static camera while objects and sources of light move delicately past the lens, creating flowing, two-dimensional, and often abstract compositions. In the process she plays with the picture quality of early video technology with its grainy contrasts to conjure almost imperceptible transitions between figure and ground.

The positions of Belgian video art are a particular focus of the collection. The videos on show here take an ironic approach to painting and its history. Pol Bury’s humoristic video sketches target traditional motifs and styles, while Jacques Lennep’s sequences, marked by self-irony, show the artist painting without the necessary artistic utensils, exposing the put-on artistic attitude. Works by Ulrike Rosenbach, Lili Dujourie, Leo Copers, and Douglas Davis are also featured.

The show is part of the “Video Archive” research project funded by the Volkswagen-Foundation.
www.ludwigforum.de