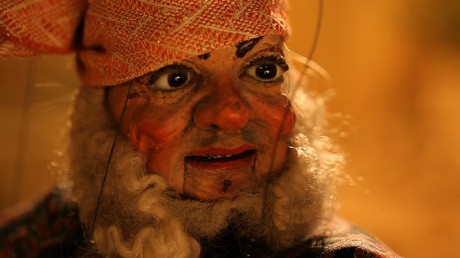 In his videos, the Egyptian artist Wael Shawky stages historical and political incidents and thus explores the interpretational space of history. The work “Cabaret Crusades: The Horror Show File (2010)” is the first part of a trilogy. On the basis of Amin Maalouf’s book “The Crusades through Arab Eyes” he examines the Arab perspective of the Crusades. Using 200 year old marionettes, he re-enacts the events that have played a key role for the developments to follow up until the political situation today.

Wael Shawky (*1971 Alexandria) studied Visual Arts at Alexandria University and Graduate School of Fine Arts of the University of Pennsylvania. He has had solo exhibitions at Nottingham Contemporary (2011) and Cittadellarte – Fondazione Pistoletto, Biella (2010). Moreover, he participated in the Istanbul Biennial (2011), the Biennale di Venezia (2003) and the documenta 13 (2012). In 2010 Shawky founded the education centre MASS Alexandria.
www.ludwigforum.de